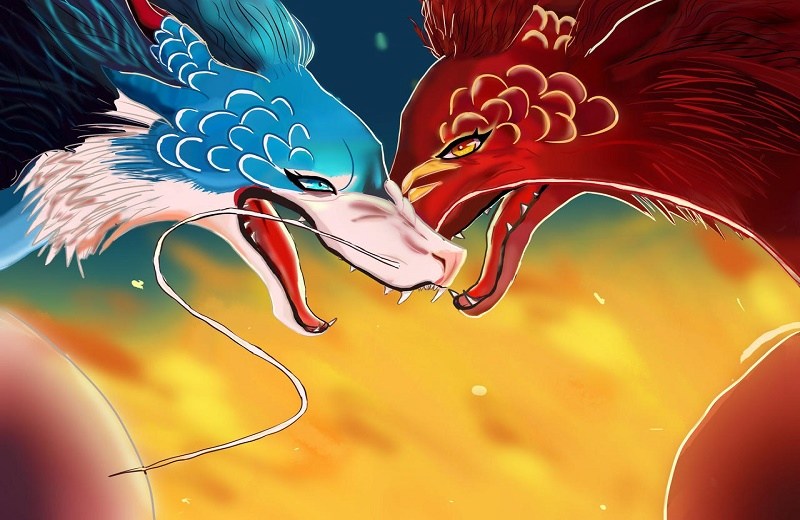 The war that started centuries ago with the animosity between the Azure Dragon and Crimson Dragon ravaged the lands till today. Their respective descendants carried the war, and the continent was divided into two under the two banners: Azure Clan and Crimson Clan.

With rampant bloodshed and abject poverty, the present descendants came up with a plan to stop the complete downfall of the continent.

The present dragon descendants decided to ally through marriage to uplift the plight of the poor citizens. However, while some welcomed this decision, many opposed it because of the lingering feeling of animosity on both sides.

This led to the rise of a deadly miscreants group – Jade Vipers, who easily swayed the opinion of the poor. Amidst the frequent attacks and the power struggle in the inner court, the two dragons- Kyro and Clove are utilizing everything at their disposal to fulfill the long-held shared feelings of unity.

In the last chapter, we saw the trial proceedings concerning the recent dungeon attacks in the palace. The general accused Princess Consort Clove and the entire Azure Clan of deceiving the imperial council as she was no dragon.

Due to these serious accusations, the entire court officials begged the Empress to dispose of Princess Consort. However, Clove and Kyro already anticipated these happenings; hence they already prepared the counterattack.

They tricked the council into thinking that Clove was not able to shift into the dragon form as the entire dungeon would have collapsed, which was further supported by Princess Kharis.

They disclosed the secret of non-melting ice crystals that appeared in the dungeon. According to the ancient myths, some dragon descendants can control elemental ice, wind, or fire; however, these abilities were long lost.

Clove demonstrated her abilities in front of the entire court, putting their suspicion to rest. However, the General still accused Clove, only to be silenced by her uncle Grand Marshall who apologized on her behalf.

Later, the empress gave one month to the Grand Marshall to find the whereabouts of the Jade Vipers, and then the council comes to an end.

The seeds of suspicion planted by the accusations made by the General will likely cause problems with the future of the alliance. The most immediate question with the readers is why the Azure dragon is trying to kill Clove.

And most importantly, why the Azure Dragon called Clove ‘her beloved broken vessel’.

In the next chapter, both Clove and Kyro will ponder over the motive behind the current actions of Grand Marshall. The suspicious words of the Grand Marshall about the previous Azure Dragon’s mysterious death will likely leave Clove in a state of dilemma.

Moreover, the mystery behind Kyro’s nightmares related to Clove’s death will be revealed.

Currently, four chapters (chapters 96-99) are available under the paid preview system on the official Webtoon app. However, many private individuals have downloaded the chapters and uploaded the unofficial translations.

Under the official app, one has to wait for over a month for chapter 100, but the unofficial translations would be made available as soon as the chapter comes under the paid preview system. Once we get the information, we will update this article.

Many fans are predicting that the next chapter will release on July 26, 2021. However, this is not officially conformed yet.

Where to Read Sub Zero Chapter 100-

One can read the official translations of this series on the official Webtoon app, though many chapters are currently under the paid preview system.