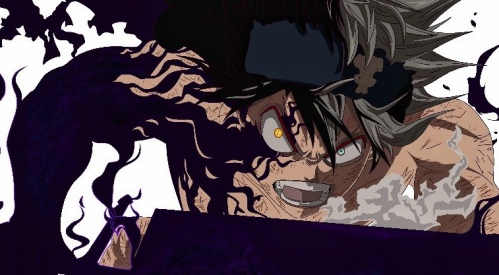 Nacht tried to redeem himself in the last chapter by defeating the twin devils Lilith and Naamah. It all started with Nacht thinking of ways to assure his victory since all the devils he was contracted with were mid-level devils who were no match to them. We also got a flashback scene in which Nacht was seen mourning beside Morgen’s grave. In the meantime, Yami appeared and said that he would make Nacht the vice-commander of his future brigade.

The scene shifted to the present scenario again where Nacht asked Plumede and Walgner to help him with his gamble. After that Nacht succeeded in surpassing his limits and transformed into the Devil Union Mode: Gallus x Felis. He boosted his spell to the class of a Supreme Devil but it was only for some moment. He went on to use Shadow Magic: Monument of Atonement and tried to trap them in it.

However, his plan failed as Lilith and Naamah were able to break free from it using their Devil Ice Magic and Devil Flame Magic. It was at that moment Nacht realized that no human could defeat a Supreme Devil other than someone who possesses Anti-Magic. Suddenly, Asta appeared out of nowhere and sliced the right hand of one of the twin devils. The chapter ended with Asta asking them what were they trying to do to their Vice-Captain.

The upcoming chapter of Black Clover is going to feature the fight between Asta and the twin devils. After uniting with Liebe, Asta has managed to upgrade his Anti-Magic powers and it will be interesting to see how he uses them against Lilith and Naamah.

Here, we have attached the raw scans of Black Clover Chapter 288

As per most of the sources, fans can read the latest chapter of Black Clover on April 4, 2021. It is likely to release around midnight in Japan. The previous chapter has already put the fans in a state of excitement with Asta coming to the rescue of Nacht.

Where to Read Black Clover Chapter 288 –

All the latest chapters of Black Clover are available on the official website of Mangaplus Shueisha and Viz Media. Fans can also try the Mangaplus app from the play store as an alternative. We will back with the next spoiler article involving Asta’s fight against the twin devils. Stay tuned with us till then.