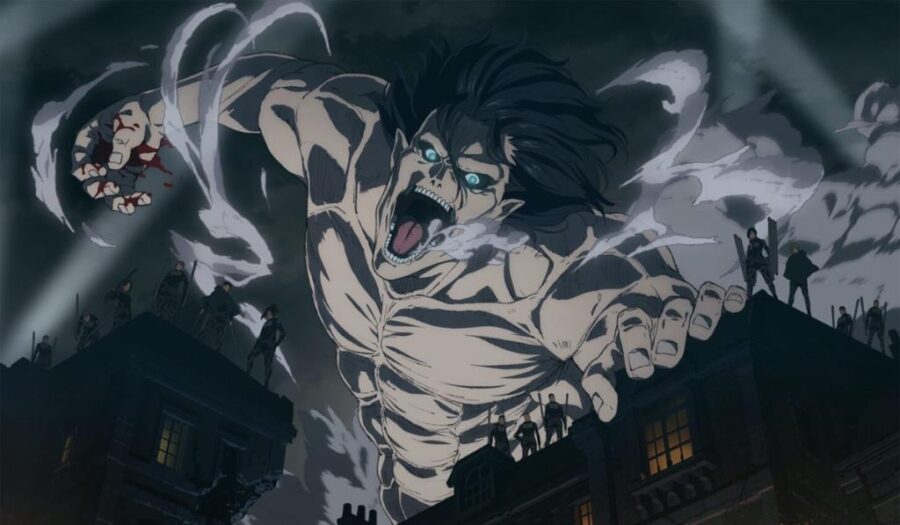 Shingeki no Kyojin Season 4 Episode 5 is titled “Declaration of War,” it will be featuring a brief talk of reminiscence between Eren and Reiner. At the same time, Willy Taybar will perform a stageplay revealing the truth of Marley that only the Tybur family knows. But as the play comes to an end, a very unthinkable situation arises, and Eren will transform into the Attack Titan. On the previous note, Episode 4 showcased the meeting between Willy Tybur and Commander Magath. They joined hand in swaying the people of Marley to support the idea of attacking Paradis Island and make Commander Magath the Head of the Army. In the end, Falco led Reiner to Eren as they meet again after 4 years in shock. What will Reiner do now? How will Falco feel when he will realize the huge mistake he has been doing till now? A very heated discussion among the two is upcoming. Read further for all details.

The latest episode can be considered somewhat a happy episode. It had a little romance, things went in favor of the titan-shifters, and everyone enjoyed a festival for the first time in their life. Everything was going alright; the plannings for the Paradis island attack and the retrieval of the founding titan were nearly complete but soon put a stop to everything, the ending became the worst case possible. Reiner met Eren Yeager under the stage on which Will Tybur is performing the play. On the stage, he is defaming Eren and his people, whereas Eren himself is sitting beneath the stage. The most critical turn in the story has come to be. So let us keep up the hype and discuss some spoilers of the next episode-

The next episode will mainly focus on a very twisted talk between Eren and Reiner, a synaptic breakdown of Reiner as he is forced to accept his past. He slowly starts contradicting his own beliefs and realizes that what he doing right now is all fake. No doubt, it is going to be the most dynamic sequence up till now.

When to watch Shingeki no Kyokjin Season 4 Episode 5-

Shingeki no Kyojin Season 4 Episode 5 will release on January 11, 2021, i.e., on Monday. It means there is no episode next week. Let us respect the Christmas break and appreciate the production’s hard work. Further, the wait is always worth it when watching Shingeki no Kyojin.

Where to Watch Shingeki no Kyojin Season 4 Episode 5-