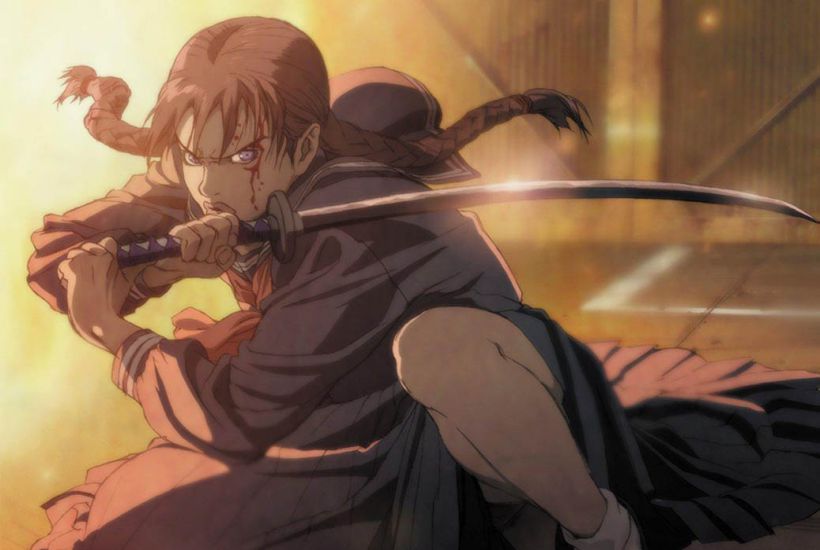 Japan is famous when it comes to not holding back on its depiction of its graphic contents or taboo subjects. And this becomes more prominent in their movies. In this list, according to MyAnimeList ratings, we have presented our picks for the Top 20 Best Gore Anime Movies.

These movies will make your skin crawl and leave you cringing with their bloodshed and psychological impact. But if you are a gore fanatic who binges on slasher films, then you are up for a treat.

These movies might not be available on many anime sites for their provocative content. But that will not be a problem as you can just get them online as well. Please enjoy our list of the Top 20 Best Gore Anime Movies.

Shoujo Tsubaki is undoubtedly one of the most controversial gore anime movies ever. This movie is famous for its notorious plot, extremely graphic gory scenes, and obscene mature displays.

It tells the story of an unfortunate girl Midori, who gets sold to a dreadful circus after her mother passed away.

There she had to live with twisted people who only endlessly tough her life. It is through these situations that she tries to survive her hellish circumstances.

This movie is an adaptation of the manga Gyo by the renowned horror mangaka Ito Junji. It tells the horrifying story of a trip gone wrong.

Kaori Sawahara, on her holiday to Okinawa, finds herself amidst monster fishes who somehow acquired legs.

This made them come to the land and wreak havoc by slaughtering anything they came in contact with. Now it is up to Kaori and her friends to survive this madness and get to safety.

Seoul Station is the best South Korean horror anime movie that depicts a zombie apocalypse. The story is set just before the events of the live-action movie Train to Busan.

Here we see a father desperately searching for his daughter. When he finds her, he discovers that she has started working as a prostitute, with her boyfriend being her pimp.

But before the reunion could happen, the zombie outbreak breaks out, plunging the world into madness.

In Lily Cat, humanity has advanced beyond measures and has almost perfected the science behind cryogenic sleep.

They can now halt 95% of the aging process for a human. This invention made deep space travels very much possible.

When a crew of 13 people and a cat went into space to search for a new world, they never thought things could go so wrong.

They encounter a dangerous alien organism with shapeshifting abilities from which they must save themselves.

Another gory anime movie that we have picked is the Darkside Blues. It tells us about a world where the evil corporation Persona has taken most of the land in its grasp.

There remains only a single part called “The Dark Side of Tokyo” in Kabuki-cho that is yet to fall under their power.

A resistance group called Messiah, under the leadership of Mai, oppose the tyranny of Persona. Furthermore, Darkside, a mysterious stranger with even more mysterious powers steps in to protect Messiah.

This gory horror anime is not for the faint-hearted. Rebi Rah, a villainous psychic, opens a portal to hell in Shinjuku and eliminates the father of Kyoya, the protagonist.

Following the example of his heroic father, Kyoya decides to defeat Rebi Rah once and for all. And thus, he fights through hordes of monsters even though at first he was not interested in this task.

A gory and action-packed anime movie is Yoshiaki Kawajiri’s Wicked City. It depicts a world where exists another parallel world called Black Earth along with the original one.

Leaders of both worlds have maintained peace for centuries with peace treaties. But some factions oppose that unity and want to disrupt the balance between the two worlds. It is up to two special agents to make sure the treaty gets signed without any disturbance.

A historical thriller, Empire of Corpses tells the story of Frankenstein in a revamped manner.

In this world, the reanimation of corpses is already a successful procedure. But even though these lifeless bodies can move, they lack the most important thing of all, the soul.

The original inventor of the reanimation experiment Victor Frankenstein was the only person to revive the soul of a person.

And to seek this knowledge, London professor John Watson goes on an experimental journey to revive his dead partner.

Blood: The Last Vampire movie is an action horror movie with some of the goriest scenes.

Saya is arguably the best Teropterids hunters in her organization. They are monsters that hide amongst humans and feed on their blood.

After her last mission, her handlers send her to the American airbase suspected of being infiltrated by at least one Teropterids.

Before that monster can give birth to more of its kind, it is up to Saya to chase and kill it. To do so, she enrolls herself as a student in a school nearby and begins her hunt.

This movie is a gory science-fiction thriller that revolves around a plague outbreak. As the Medusa virus takes over the world, some people go on a cold sleep in a capsule located in a castle to survive the epidemic.

When they wake up after an uncertain amount of time, they find their abode covered in thorns. Moreover, they find their world lurking with mysterious monsters. And that is how the quest to find answers starts for these seven survivors.

Vampire Hunter D is the prequel anime movie and is respected as a cult classic. It tells about a world in the future where vampires, demons, and mutants live together and cause mayhem.

When Doris, a beautiful girl, catches the unwanted attention of the vampire Count Magnus Lee, she decides to seek help.

She meets D, a wanderer who also happens to be one of the best vampire hunters. He sets out to engage in a gory battle with vampires to save her.

One of the goriest anime movies on this list is Blood-C: The Last Dark. This movie acts as a sequel to the series Blood-C and narrates the story from there.

We see Saya coming back to seek revenge on Fumito, who deceived her badly and conducted dangerous experiments in the previous series.

This time she is set on defeating him and exacting her vengeance for all the hideous things he did in the village.

The animation on this movie is as trippy as its story. Pandy and Retro have no recollection of who they were when they woke up.

Being confused about themselves, they go on a rampage in search of food and basic amenities.

But they get caught and are thrown into the lunar prison, Dead Leaves. There they discover its secrets on being a confidential facility where mysterious experiments go on.

Set in feudal Japan, this movie showcases the story of Jubei Kibagami, a masterless swordsman. After being betrayed once, he decided not to meddle in any conflict anymore.

But things do not go as planned as he finds himself in a deep mess when he saves a woman named Kagero.

Not only does he make new enemies for himself but, is also forced to confront his past.

This movie is divided into three short films that depict three completely different stories. But all these stories have one thing in common, they are all psychological masterpieces.

The first story is about two astronauts who stumble upon an abandoned space station in deep space. There they unravel the mystery behind what happened with a famous opera singer, Eva.

The next story revolves around Nobuo Tanaka, an unfortunate lab technician who mistakenly eats a medicine to enhance the power of his flatulence.

The last one is about a young boy aspiring to surpass his father in protecting his nation by bombarding. The only problem is, there might be no enemy nations to fight with in the first place.

This gory anime movie is the sequel to Vampire Hunter D. It talks about one of the best vampire hunters D, who encounters new challenges in this movie.

D gets the offer to locate the daughter of a wealthy family who got kidnapped. As the prize money is high, other hunters join in this hunt as well.

But things are not that simple as there seems to be more to this simple quest than what meets the eye.

Akira is one of the best gore anime movies with dystopian setting, and controversial themes. It talks of a world damaged by World War 3 initiated by a boy with psychic powers.

In one such gang war, Tetsuo Shima encounters a psychic who escaped from a research facility. This leads to the government rushing to capture him as he awakens new abilities as a psychic himself.

Berserk movie is the best gore anime movie to watch. This movie is the third installment that comes after two other film adaptations of the manga.

In this movie, we see what happened to the band of the hawk after Guts left them. They are far from the hailed heroes of the past.

Now they are just hunted like animals by the king, who also captured their leader Griffith for treason.

Even though Band of the Hawk reunites with their former leader, he is far from his older self. And after being through many sufferings, something has changed inside Griffith. This change will not only destroy his original self but also ruin everything that he ever cared for.

Ghost in the Shell is another best gore anime movie. This movie revolves around a futuristic world and mainly centers on Niihama City.

Criminal activities are a big part of this city, and hence it is up to Public Security Section 9 to maintain order. Motoko Kusanagi, a cyborg officer of section 9, takes the case of people losing their memories into her own hands.

The one behind this is the hacker Puppet Master, and it is up to Makoto to solve this mystery behind his attacks.

It is a psychological masterpiece and is arguably one of the best gore anime movies. In this film, we see Mima Kirigoe, the protagonist blurring the lines of fantasy and reality.

Mima, a former member of the successful Jpop group CHAM!, decides to move to the film industry and leave her position as an idol.

This choice took a toll on her mentally, physically, and psychologically as the results of her decision proved to be more devastating than she ever could have imagined.

These films are some of the goriest and most horrifying movies ever made. Even though they deal with provocative subjects, their popularity never wanes.

They effectively use intense disturbance to hold the viewer’s attention and deliver a stellar depiction of reality.

We hope we were able to present the Best Gore Anime Movies to our readers. Stay tuned for more news and updates on your favorite anime/manga/webtoon.