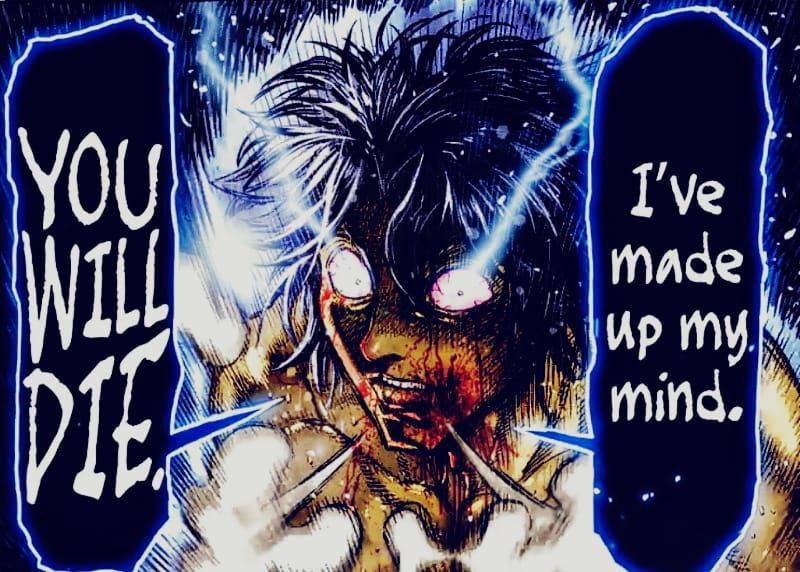 An hour ago, Reddit posted the raw scans of Kengan Omega Chapter 87. These raw scans are not translated into English, but we can estimate the next chapter’s happenings from the Japanese version. In the next chapter, we will get the winner of round 5. The previous chapter ended with the final blow of Ryuki, which successfully placed on the vitals of Naidan. So, what will happen to him? Will he able to protect his vital points or face death? Therefore, in this post, we will discuss the raw scans, spoilers, and the release date of Kengan Omega Chapter 87.

Kengan Omega Chapter 87 will release tomorrow under the title, “Onwards to the Blue Sky.” The next chapter will begin with the continuation of the tussle between Naidan and Ryuki. Naidan has tried to choke him. So, in response, Ryuki popped up and hardened his thumb muscle, then pierced into Naidan’s vulnerable spot. This technique is also one of the Gaoh technique. Ryuki wanted to use the same style during the fight with Akoya but got ceased by his emotions. But this time, circumstances were different. Hence, he pricked the Gaoh Style Drill technique to save his life.

As an outcome, there will be too much blood coming out from Naidan. Both Liu and Koga will try to stop the fight, but they will be late. Naidan will receive the fatal wounds from Ryuki, and in an instant, he will start to lose his consciousness. After that, we will witness the emotional flashback between Liu and Naidan. Naidan made his debut in Purgatory one year ago, and his first challenge was Liu. After the fight, they both became friends and started their journey in Purgatory together.

At the end of the chapter, Naidan will die, and as a result, Liu will take revenge for his death. Therefore, we will have our first fighter for round 6. So, who will fight against him? Liu has achieved the title of “Demon of Three Fist” in purgatory. He is strong, so in our opinion, Akoya may join the next round in opposition to him. It means the next round will also become the deadly round as both the opponent will enter with the killing instinct.

Kengan Omega Chapter 87 will release tomorrow evening on November 26, 2020. Fans have one more day to witness the beginning of round 6. Round 5 is going to be the most fantastic fight till now.

Where to Read Kengan Omega Chapter 87-

Fans can read the Kengan Omega Chapter 87 tomorrow from the Mangadex website. Reddit will also provide the link to the upcoming chapter after the official release. Here we have pasted the link to the raw scans of the next chapter. So, if you want to read the chapter now, you can visit there.