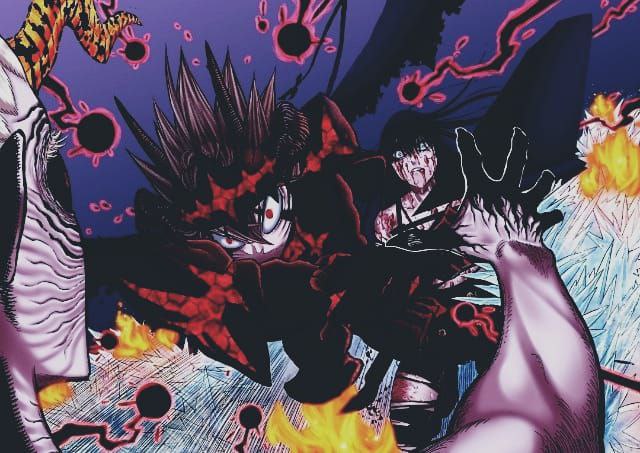 Chapter 289 will be a continuation of the events in the last chapter where Asta came to the rescue of Nacht. He broke through the window and came at the exact time before Lilith and Naamah were going to kill Nacht. It seemed Nacht had lost all hope since even after Gimodelo encouraged him to take down the twin devils he said he didn’t matter anymore.

However, Asta stood tall before him and said that it was due to Nacht he had grown in power. He asked him to witness his strength as he took on the high-ranking devils. It was at this point we got the best scene in the chapter when Nacht saw a glimpse of Morgen within Asta. It revealed that he was subconsciously hoping for Morgen to appear in some form. Meanwhile, Asta suddenly remembers that he could maintain his Devil Union Mode for only 5 minutes and as a result, he should hurry.

Lilith and Naamah deemed Asta as a worthy opponent while Liebe was far too excited about getting the chance to battle with two high-ranking devils. The twin devils turned into their respective elements and their physical bodies vanished which made it difficult for Asta to hit them. He then summoned his third sword, Demon Destroyer to turn the tides in his favor. The chapter ended with Asta slicing through one of the twin devils which came as quite a shock to it.

The upcoming chapter is going to be a blast with Lilith and Naamah taking a new form. This will pose a new challenge for Asta and Nacht who also need to combine their powers to defeat the two devils. Chapter 289 is going to be published with the title of: “Freezing Sun“.

Here, we have attached the link to Black Clover Chapter 289 Raw Scans.

As mentioned on Mangaplus Shueisha, the latest chapter of Black Clover is going to be released on the scheduled date of April 11, 2021. There is also going to be no break next week which is a huge relief for the fans as the story is in one of the most exciting turns at the moment.

Where to Read Black Clover Chapter 289 –

Readers can avail chapter 289 of Black Clover on the official sites of Mangaplus Shueisha or Viz Media. We will be back with the exciting fight between the fused devils and Asta as soon as the new chapter is released. Stay hyped with us till then.