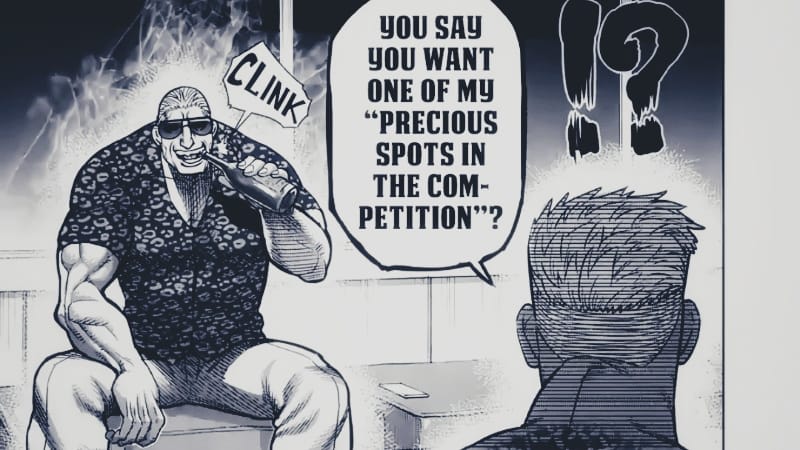 Round 8 has finally begun between the two Judo practitioners. From the Purgatory, Arashiyama Jurota (The Gentle King) arrived, and in counter, Hayami Masaki (The Killing Throw) has made his appearance from the Kengan Team. And the next chapter will commence from the furious fight between them.

Arashiyama Jurota is one of the two Kings of the Purgatory. Lolong Donaire is the first King who won the Ultimate Gladiator Playoffs last year, and it’s said that he is equal in power to Kengan’s top fighters. However, in the previous chapter, Yamashita justified that Jurota is on par with Lolong. It means Misaki will have a tough time against him. So, what will happen in Kengan Omega Chapter 98? Let’s discuss.

However, on the other side, Jurota asked about his relationship with Meguro Masaki (who died in KAT). Jurota had read in his Weekly news book that the same boy complex as Hayami was involved in the murder of Meguro Hiroki (Judo expert). A 13 years old boy who could defeat an Olympic Judo Champion, who knows how strong he would be as an adult. Hence, it displays that in the next chapter, we will get many answers regarding Hayami.

There are also chances that Meguro was involved with something connected to Jurota, and Hayami may know this. That’s why he advanced for this match. Hayami is a tough fighter to read. Based on his appearance, no one could tell his intentions and motives behind this tournament. The raw scans are out.

Here, we have attached the raw scans of Kengan Omega Chapter 98.

Kengan Omega is a weekly scheduled manga; therefore, Chapter 98 will release this week on February 18, 2021, i.e., on Thursday. The timings will be different according to the regions. Also, there is no news of hiatus next week. The upcoming chapter will show the beginning of Round 8.

Where to Read Kengan Omega Chapter 98-

Fans can read Kengan Omega Chapter 98 on the official website or Mangadex once it gets released. Kengan Omega series is also available on some private websites and apps. We will be back once we get the raw scans of Chapter 98. Till then, stay tuned with us.