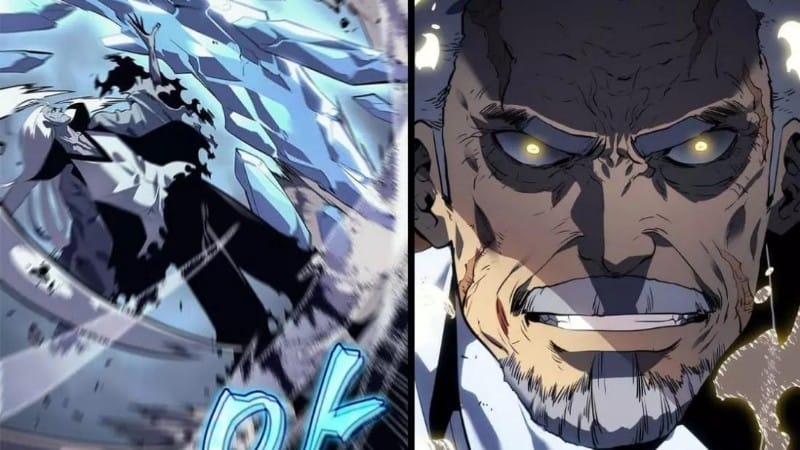 The last chapter of Solo Leveling ended with a cliffhanger with a fight between Jin-Woo and Monarch of Frost. Moreover, Monarch of Frost’s return also gave a pleasant surprise to the fans who were least expecting it. Besides, the Monarch’s revelation regarding breaking two of Fragment of Light’s pieces further proves they are ready for war.

The previous chapter showcased the fight between Goh Gun-Hui and Monarch of Frost where the latter gravely injured the former. Furthermore, he took the blow so he could break the dimension and Jin-Woo shadow soldier could get out. As a result, Jin-Woo could teleport and intercept the ice elf. So, what will happen in the new chapter?

Chapter 151 will begin from where the previous chapter left off. Upon seeing the Monarch of Frost he will be reminded of his past failure to extract Baruka. He will ask the creature’s identity and at that moment the opponent will realize Gun-Hui was talking about him as a variable. And a fight will break out between them.

Chapter 151 will be available next Sunday, i.e., May 13, 2021. As there is no current hiatus for the series fans can expect Chapter 152 to release on 20th May. In the next chapter, Jin-Woo will call Thomas Andre will confirm one of his doubts. And it seems like Sovereign of Frost is also making preparations for the upcoming battle.

Where to read Solo Leveling Chapter 151 –

Tapytoon or Mangadex are the sites from where fans can access the current chapters. Besides this, Reddit also updates the link for Solo Leveling Chapters fans can read the series through that link. Readers can even read on the SoloLeveling website. We will be back with more Solo Leveling spoiler articles. Till then stay tuned.