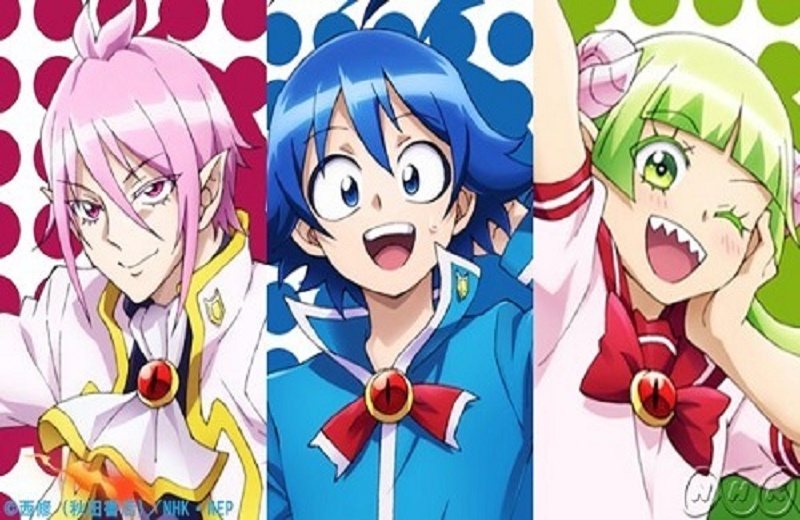 Finally, the latest Chapter 203-‘Food for the Young’ was released recently. The chapter began with the most awaited answer in the lives of Iruma-kun fans that as to what kind of Netherworld does Iruma wishes to create. Iruma-kun, while hesitant, replied that he thinks that the Netherworld is fine as it is. The 13 Crowns were displeased on seeing Iruma ignorant about the present instability in the Demon world. Iruma wants to create a Netherworld just like The Babyls High School– a place where everyone’s ambition is nurtured and where they can have a sense of belonging.

Furthermore, all the three future candidates were invited to the dinner table where they were presented with delicious food. Leiji, who wants to create a land ruled by law, ate like a barbaric, and Razberry cunningly shifted the food he didn’t like to Leiji’s plate. However, with his enormous appetite, our hero Iruma devoured everything and shamelessly asked for seconds, a thing that was unheard of at the 13 Crowns Dinner.

However, little did they know that the interview question was just an excuse, and they were being judged based on how they eat. A demon’s true colors come out the moment they eat a meal; that is why the 13 Crowns always hold their meetings over dinner. While eating, a demon’s greed is on full display, and according to them, the best example of this was Iruma-Kun. After all, it was the first time someone asked for seconds, and Iruma savored every last bit of it happily. According to them, Iruma has got ‘Bottomless Greed,’ and the idea of him becoming the demon King sends chills down their spine. Towards the end of the Chapter, the author left the fans dumbstruck as he presented an image of mature Iruma devouring thousands of dishes as The Demon King to satisfy his ‘Bottomless Greed.’

Writer Osamu Nishi is surely a man of talent as he knows how to keep the fans hooked. By illustrating a picture of the future Iruma as The Demon King, he has surely swept us right off the feet. However, the writer also uses an element of mystery as it is becoming more and more difficult to predict what will happen in the upcoming chapters.

According to some Reddit community pages where fans come together to discuss all kinds of different spoilers and theories, the next chapter would mostly be filled with everyone gearing for the future Demon King Selection. The three candidates are honing their skills to face what will come their way. The 13 Crowns will nominate their candidates they see the potential to be the future Demon King.

Most probably, Baal will nominate Kirio-kun-the main antagonist of the current arc. Baal, along with Kirio, is hatching a sinister plan to overthrow the current order of the Netherworld, and with him nominating Kirio, he would be one step closer to that. Also, with him suspecting Iruma-kun to be human, it would be interesting to know what turn of events this might bring to the Demon King selection process. The raws of Chapter 204 will release a day prior to the official release. We will edit this article once we get the raw scans.

Here, we have attached the link to Iruma Kun Chapter 204.

Welcome to Demon School! Iruma-kun manga has been published in Akita Shoten’s manga magazine Weekly Shonen Champion since its first release in 2017. After a two-week holiday, they have been releasing chapters weekly. One can expect the English version of the next chapter to release by 22 May 2021. However, the raw version is expected to release a few hours before the English one.

Where to Read Iruma-kun Chapter 204-

There are a number of sites from where one can read Welcome to Demon School! Iruma-kun manga. One can read the chapters online on sites like welcometodemonschoolmanga.com, mangarockteam, and mairimashitairuma-kun.com for free. Stay tuned to know more about the upcoming chapters!