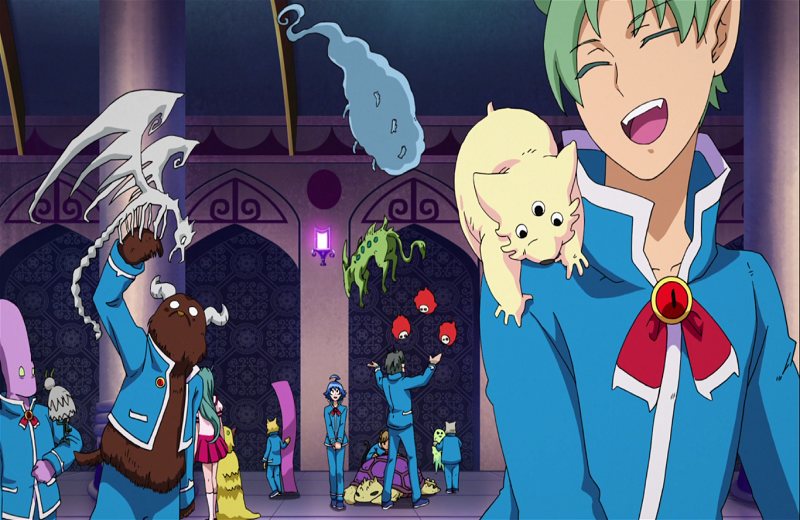 The last chapter titled – Like Master, Like Familiar was rather an eerie encounter between Andro M. Jazz and Iruma Suzuki. Jazz is one of the most popular students amongst the first years and currently holds Rank 4.

However, underneath his cool facade, he harbors a dark secret- his familiar Split Wolf. At the start of the chapter, Jazz is seen walking to an empty room where he cautiously summons his familiar.

Despite his mighty name, the Split Wolf is an adorable fluffy puppy-like demon. He has short arms and legs and is better suited to be a street performer rather than a battle pet.

Jazz is seen training his familiar but quickly gives in to his cuteness. Little did he know that Iruma was the sole witness of his lovey-dovey moments with his familiar.

Iruma was hiding in the locker munching on snacks to hide from the snack police. A startled Jazz offers Iruma money to keep his mouth shut. Iruma enquired Jazz about why was he training his familiar in secret.

As a familiar’s appearance reflects its master’s personality, Jazz was a little flustered to show his cute little boo to everyone. According to him, his familiar should be a ferocious beast like Sabro’s Kelbie or Asmodeus’s Gorgon Snake.

Jazz’s cute little familiar is expected to be a ferocious wolf beast with huge fangs and twins snakes around his tail. Alas! To his dismay, he remains this cute and fluffy even when Jazz is a Rank 4.

Further, Iruma corrects Jazz by telling him that his familiarity reflects the personality of its master as underneath all the facade Jazz is a considerate and reliable guy when it counts. And in times of need, his familiar will be reliable too.

They both discovered scales growing the Split Wolf’s tail which leaves Jazz elated as he is now showing signs of growing. Towards the end of the chapter, it is seen that the familiar skilfully steals Iruma’s candies just like his master Jazz, truly like master like familiar.

The last chapter along with the previous few was a string of pearls deviating from the most important topic currently – the Demon King Selection Process and the Sinister Plan of conniving Baal along with the Six Fingers.

With too many scenarios and things popping up in our minds making us restless, Osamu Nishi surely likes sweet torture. According to some community pages, Osamu is likely to continue with this sweet torture while introducing many off-beat topics centred on the life of Misfit’s Class.

Well, it is highly unlikely to predict what aspect will be covered in the upcoming chapter. Moreover, it is way more difficult to say when the fans will find repose. One can patiently wait for the next chapter to unravel whether there be another chapter added to the string of the previous few or the thrilling part of the arc starts.

As we move closer to the next exciting arc the fans are getting restless in anticipation. With one chapter releasing every week it calms us down momentarily alongside making us even more restless about what’s to come next. The next chapter is expected to release around 9 July 2021.

Where to Read Welcome to Demon School! Iruma-kun-

With a wide variety of uncanny yet relatable characters and amazing thrills, this manga is a must-read. One can read this light-hearted comedy series on several sites like marimashitairum-kun.com and readkomik.com. Stay tuned to know more!