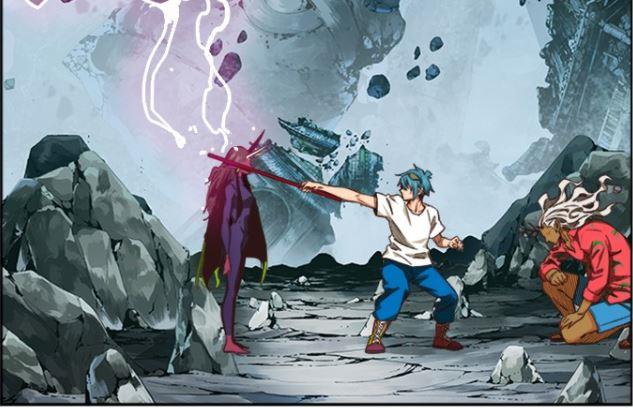 God of Highschool Chapter 501 will be featuring a trembling fight between the Monkey King “Jecheondaeseong” and the First Dragon “Ogre.” This is going to be one of the most splendid martial arts matches disregarding the hefty bombardments and collision as in other magical warfares in the story.

On the previous note, Chapter 500 showcased a simple introduction of the Ogre by the present Dragon King and a small bout between her and the Monkey King. The chapter ended with Ogre saying that both she and Jin Mori are actually the bastard children of Gaia. Who is Gaia? How will the fight proceed? Will Jin Mori win back his Yeoui before Mubong finds him? Read further for their answers.

The Monkey King passed the trial of the 19th dragon inside the Dragon King’s body and thus won over all the Yeoui present there, under one week. Mubong had started the upturning of the land, which undid the seal on the ancient dragon, Ogre. As the present Dragon King bends over in respect of the first dragon, Jin Mori rather attacks her blatantly. Read further for what is going to happen between them.

Basically, the chapter will show the true terror of the first catastrophe on Earth, even before the gods of the heavenly realm reached here. The following couple of chapters will feature their fight as a trial by Ogre to accept the Monkey King as her new master.

Chapter 494 will release next week on February 5, 2021, i.e., on Friday. The series is finally focusing on the main character and its relationship with the ancient one, Gaia. Further, the wait is always worth it when reading God of Highschool.

Where to read God of Highschool Chapter 501–