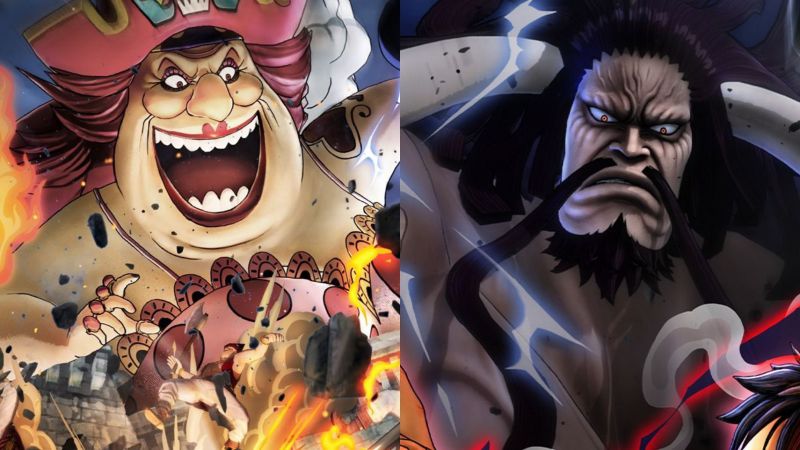 The raw scans for chapter 1014 of One Piece are finally out. Let us quickly glance over what happened in the previous chapter. Nami had taken a big step by standing strong against Ulti. But, Lady Ulti was not weak enough to be shaken by a single blow. She quickly recovered herself and went out to attack Nami. Big Mom surprisingly came to her rescue and called upon Prometheus, Napoleon, and the newest member Hera. Those three joined together to launch a combined attack on Ulti called Master Cannon, which was enough to defeat her.

Seeing this as an opportunity, Usopp and Nami tried to escape taking Tama along with them. However, Big Mom intervened at that moment and took Tama to herself. Meanwhile, Zeus arrived at the scene and got his heartbroken when Big Mom told him that he was no longer needed and commanded Hera to eat him. Zeus tried to make it up to Nami by launching an attack on Big Mom with all his strength. He failed in his attack and was eaten by Hera.

The situation was dire for Usopp and Nami when out of the blue, Kid dropped onto the scene and struck Big Mom using Punk Gibson. The scene shifted to the top of Onigashima, where Kaidou was telling Luffy that it was quite obvious he would let the new power get to his head. The scene ended with Luffy falling to the sea as we wait to know his fate.

Chopper and Momonosuke will have important roles to play in the upcoming chapters as Kaidou will make his way towards him. It will be quite interesting since we may get to see a sudden development in Momonosuke’s power. Chapter 1014 is going to be published with the title of: “The life of the actor“.

So, the question here arises, who will save Momonosuke now? Many fans are predicting that it is a fake Kaido made by Kajuro and Kinemon will save Momonosuke from him. Also, we may witness Yamato in action too. It will be incredible to see another Mythical Zoan. However, it’s up to Oda sensei how he will twist the story from here. And the most important thing, who will defeat Kaido now?

Here, we have inserted the link to One Piece Chapter 1014 Raw Scans.

One Piece is returning after a weeklong break, and the new chapter is going to be published this week, on May 30, 2021. Fans will also be relieved to know that there is going to be no break next week. It will allow them to learn about what happened to Luffy without any interruption.

Where to Read One Piece Chapter 1014-

Fans can visit their most trusted site of Mangaplus Shueisha and Viz Media to enjoy the latest chapters of One Piece. Chapter 1014 will release around midnight in Japan, after which they will be updated on the two websites. We will come back next week with a new spoiler article. Till then, keep on reading new content on our website.