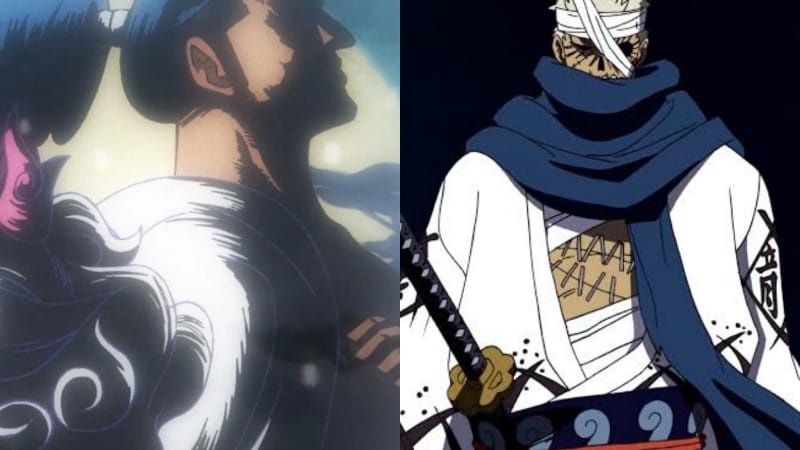 We have never been closer to the end of Wano Arc than this. All the members of the Tobi Roppo have been defeated, and only 15 minutes left before it reaches the Flower Capital. Meanwhile, Raizo took on Fukurokuju and asked him why he was serving such a man like Orochi.

Both of them talked about their own values and ideals and kept on exchanging fearsome blows. Killer was occupied with Hawkins on the other side, who kept himself alive with his straw dolls. It also looked like he had connected Kid to it, which would make things even more complicated for Killer.

The real troubles were King and Queen, who were punishing all the animal kingdom pirates under the spell of Otama’s dumplings. Sanji couldn’t defeat them by himself and needed the help of Zoro, who had still not recovered. When it looked like King would attack the injured Zoro, Marco came and stopped him.

He told of a tale he had heard about a race of people who could burst into flames. He also said that it was time for the stars to take their place on the stage as Zoro and Sanji landed their trademark attacks on King and Queen.

The upcoming chapter of One Piece will be highly significant since it will mainly cover the fight between Zoro and Sanji against King and Queen. The chapter will have the title “Looks just like him,” and we may well see the fall of two of the highest officials of Kaido or the Straw Hats.

This is the short summary of the next chapter. we will witness back to back surprises, first King, then Zoro and last Momonosuke. This will be one of the greatest chapters in One Piece history. Finally the raw scans are out.

Here we have attached the link to One Piece Chapter 1023 Raw Scans.

According to the release schedule of One Piece, the new chapter is going to be published on August 29, 2021. Fans need not worry about another break as they will be eager to see the adult version of Momonosuke in the next chapter.

Where to Read One Piece Chapter 1023-

One Piece Chapter 1023 can be read by visiting the sites of Mangaplus Shueisha and Viz Media. You will find the latest chapters updated on their sites. We will come back again next week with another set of One Piece spoilers.