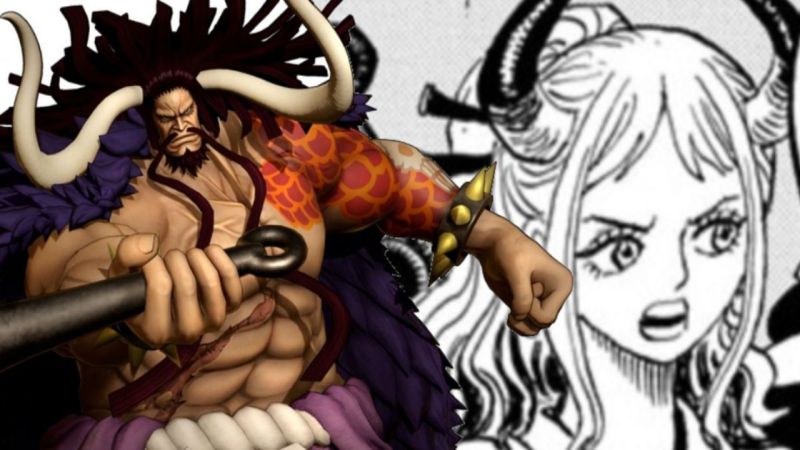 Momonosuke had finally transformed into an adult, but it looked like Luffy’s plan was not going to work since he was still afraid of flying. So while Momo was still gathering up his courage to fly, we were taken to the top of Onigashima, where the battle between father and daughter was still continuing.

Yamato had used Mirror Mountain to dodge a perfect strike from Kaido. Yamato proceeded to attack with Hollowed Glacier Slash, to which Kaido replied that it did not matter if Yamato tried to act like a samurai of Wano because she couldn’t escape her bloodline.

Kaido decided to attack Yamato with words as he went on to say how Yamato had been all alone her whole life. Yamato said that she had friends. Kaido replied back that all his friends were dead and even the samurai who helped her in the cave had died. Then we saw a flashback where little Yamato saw a man string to death because he was trying to give some food to Yamato.

Meanwhile, Momonosuke had managed to fly up into the air, but since he was flying with his eyes closed, it kept wrecking the entire Onigashima. He finally managed to find his way to the top as Luffy used Jet Culverin on Kaido while Yamato used White Serpent.

Kaido was surprised that Luffy survived and enquired about the other dragon. Momonosuke revealed his identity, to which Kaidou said that the world did not need two dragons, and the chapter ended.

The upcoming chapter of One Piece will focus on the battle between Luffy and Kaido. It will likely be the final battle between them where we will know the outcome of their fight.

Luffy will also have Yamato and Momonosuke to help him in his fight this time. The chapter will be published with the title “The Decisive Battle,” which clearly indicates its importance.

• The chapter will start in the flower capital where Tenguyama will ask Toko if she is having a good time. In a flashback scene, we will come to know that when Tama left for Wanokuni with Speed, she informed Tenguyama. Thus Tenguyama will wonder if Tama is okay.

• The sky in the Flower Capital will be covered by clouds which will prevent them from seeing that Onigashima is coming towards them.

• On the top of Onigashima, we will see Mary from Kaido’s army relaying all the information to hi mates inside the castle through his amplified voice. Mary will say that Yamato is injured and Kaido is the blue dragon while Luffy is riding on a pink dragon.

• Yamato will remember that Momonosuke told him that if he could turn into a monster like Kaido, he could be of help to everyone.

• Mary will say that the identity of the pink dragon is unknown, and Queen will wonder if Yamato has stopped Kaido.

• Luffy will tell Momonosuke to bite Kaido, but Momonosuke will be afraid to do it. Kaido will shoot his Bolo Breath towards them but Momo will somehow manage to dodge it.

• Momonosuke will remember Kaido’s attack at Kuri castle after Oden’s death and how he attacked his mother. Momo will bite Kaido which will make him scream in pain.

• Inuarashi and Nekomamushi will lose their Sulong form as the moon will get covered by the clouds. Jack and Perospero will mock them and say that their luck has run out. Carrot and Wanda will watch helplessly.

• Luffy and Kaido will attack each other with the Color of the Supreme King Haki. Their attacks will not touch each other but the impact will be too strong and the sky will be split into two.

• This will make the moon visible again and Inuarashi and Nekomamushi will gain their Sulong form back.

• This will allow them to finally defeat Jack and Perospero and get their revenge.

• A small door will open to the building behind them. Orochi will emerge from the shadows and say that Jack’s defeat has nothing to do with him.

We will update this post once we get the full raw scans of One Piece Chapter 1026. Also, fans can purchase One Piece new arrivals for this Halloween by visiting the link below.

The next chapter of One Piece will release on September 26, 2021. It is safe to say that the fans are excited to see the series return after a week-long break. According to Reddit, there is no break next week also. It is very glad to hear that we get two chapters back to back.

Where to Read One Piece Chapter 1026-

Fans can go to the official sites of Mangaplus Shueisha and Viz Media to read the latest One Piece Chapter. We will be back with more spoilers of your favorite manga. Stay tuned till then.