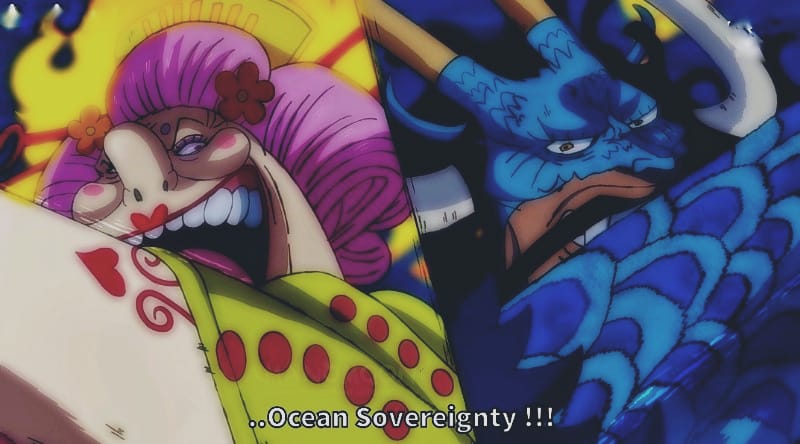 In the last chapter, we saw the continuation of the battle between the Worst Generation and the two Emperors. The chapter started with Kinemon and Orochi coming face to face against each other. Orochi freaked out on seeing them and took on his beast form. However, Kinemon and his group had no time to deal with Orochi and they just sliced past him and continued to move forward. Raizou stayed behind and took on Fukurokuju who said that they were destined to engage in battle one day or the other.

The scene shifted to the top of Skull Dome where Kaidou was proving to be a handful with his Hybrid-Beast form. Kaidou prepared a combination attack with Big Mom and launched Conquest of the Sea towards them. Zoro had to come to their rescue and block it with full force using his swords. Luffy used this explosion as a cover to launch a sudden attack on Kaidou who managed to dodge it and blasted away Luffy with a powerful beam of lightning.

Meanwhile, Zoro, Kid, and Law came up with a plan to eliminate Big Mom. Kid made a metal box in which Law trapped Zeus using his Devil Fruit power. On the other side, Zoro slashed up Prometheus to pieces while Killer took care of Napoleon. Big Mom became enraged by this and attacked Kid who used his Devil Fruit power to repel and pushed Big Mom out of the Skull Dome onto the sea.

The upcoming chapter is going to take us one step closer to the conclusion of this epic fight. Chapter 1010 of One Piece will be published with the title of “Haoshoku”. Here, Haoshoku / Conqueror will be the center point of the next chapter. It will even be related to Zoro also. So let’s begin the spoilers. Hopefully, we will get a thrilling conclusion to this exciting turn of events.

Here, we have attached the link to One Piece Chapter 1010 Raw Scans.

As per official sources, the upcoming chapter of One Piece is going to release on April 11, 2021. The upcoming Sunday is going to be filled with excitement for the fans as they can finally see the conclusion of this battle between the Worst generation and the two emperors.

One Piece fans can read the upcoming chapter of the series from Mangaplus Shueisha and Viz Media. As an alternative, there is also the Mangaplus app by Shueisha available on the Playstore. We will be back soon with another raw scan and spoiler article covering the conclusion of this fight.