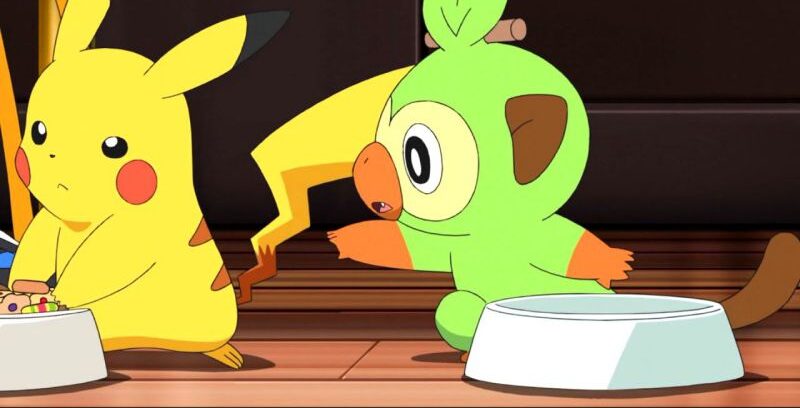 The previous episode started with Go having a weird dream about Rilabloom. He woke up with a jolt to find a Grookey sticking to his arm. The next morning when Ash and Go decided to catch it, they found out it already had a trainer. Grookey seemed to have a lively and energetic personality and went around troubling everyone. Ash and Go decided to retrace its steps with the help of Wanpachi to find out where it came from. After checking the security footage of a shop, they were shocked to see that it came from the gadget of Team Rocket.

Meanwhile, Team Rocket arrived at the scene and retrieved Grookey with its Pokeball. Go seemed very dejected after this since he had formed a great bond with Grookey. On the other side, Grookey was also not happy living with Team Rocket. Grookey slipped out in the middle of the night and managed to have a chance encounter with Go who wanted to return Grookey’s stick. Although Team Rocket intervened again Go was able to catch Grookey with his co-operation and completed his trio of starter Pokemons.

The episode was kind of disappointing in the sense that this was the first time in the history of this series that Ash did not get to catch a single starter Pokemon of a particular region. Although the story writers are trying to make the Galar region unique, most of the fans were unhappy that Ash was deprived of a Galar starter.

In the preview of the upcoming episode, we saw that Ash is going to challenge Rinto and Earlade for a rematch. Ash had previously lost to them with Farfetch’d which sparked a regime of vigorous training for both of them. It seems that now Ash and Farfetch’d are going to redeem themselves. Farfetch’d and Ash has both trained a lot since then especially with one of the Elite Four of the Kalos region where Farfetch’d learned to co-operate with Ash.

However, as the battle started we saw in the preview that Earlade managed to slice Farfetch’d’s leek into two halves with his blades. We know of how much importance the leek is to Farfetch’d not only in his battle but also in general. It will be interesting to see how Farfetch’d manage to overcome this adversary and adapt to the situation.
The upcoming episode is going to release with the title “Aim to be a Leek Master“. Thus, it is going to be centered around Farfetch’d and it won’t be completely improbable if he evolves into his next stage in the upcoming episode.

Episode 60 of the Pokemon Journeys Anime is going to be released on March 19, 2021. Pokemon Journeys has a weekly release, so fans don’t have to wait a whole lot to see a new adventure of Go and Ash. It will be exciting to see what new Pokemons Ash and Go encounter next.

Where to watch Pokemon Journeys Episode 60 –

The latest episodes of Pokemon Journeys Episode 60 can be watched on Netflix. Netflix has provided access to all fans to watch their favorite Pokemons in action. We will be back soon with another spoiler and prediction article. Until then, stay tuned with us.