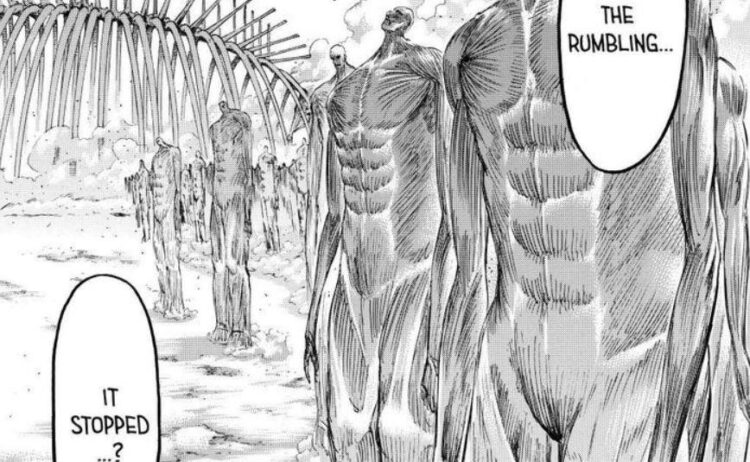 Attack on Titan Chapter 138 will be featuring Reiner as he fights against the sprouting spinal cord of the primal creature, trying to reconnect with Eren’s head. All the previous titans reincarnated by Eren have turned against him and helping to stop the rumbling. Now that Eren’s head is off and the remaining structure is at a halt, even the rumbling has stopped temporarily.

On the previous note, chapter 137 gave the final and decisive details on the real reason behind the emergence of Titans. All the hints were linked with the classic “Cellular organism with the motive to multiply and survive” logic. Did Ymir really betray Eren in the final moments? But then, the primal spinal cord should not be favoring Eren again if it so. Read further to understand what all can be expected next.

Eren’s head is on the ground, and the primal spinal cord is being held tight by the Armored Titan. To give a decisive blow to the remaining structure, Armin transformed into the Colossal Titan, which in turn created a massive explosion. Will that really help Reiner? Or will he get hurt himself, failing the task in the first place? Let’s discuss some potential spoilers of the upcoming chapter.

Basically, the next chapter will showcase the results of the continuous efforts by the team to defeat Eren. It is less likely for him to die, but then again, it’s Isayama we are talking about. He never fails to startle us with his unique story building, making it totally worthwhile, following the series.

Attack on Titan Chapter 138 will be releasing on March 9, 2021, i.e., on Tuesday. The dates are not definitive as they are not released beforehand, although you can subscribe to our website for immediate updates on the release dates of all popular manga. The story has finally taken a definitive turn against Eren and his ideals. A vital sequence in the story that any reader can not afford to miss.

Where to read Attack on Titan Season Chapter 138–

You can read all the chapters of Attack on Titan manga from Kodanshacomics.com or other official sites. You can also buy the volume bundles with featured spin-offs and illustrations from online bookselling sites. We will be back next month with another Attack on Titan manga spoiler article. Until then, stay tuned, stay hyped.