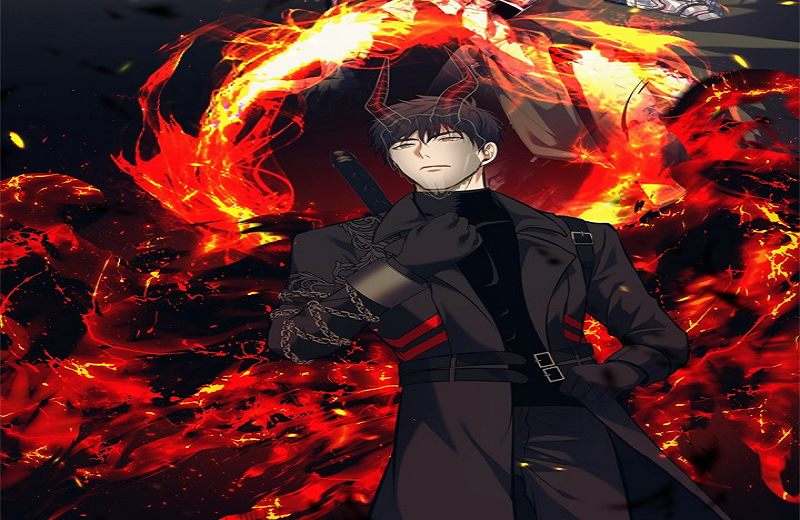 In the last chapter, we saw that Yeon-woo finally hatches his magical beast egg. Despite the continuous pleadings of the One-horned tribe elders, Yeon-woo went ahead with his plan to hatch the egg as he could feel the beast shouting to come out through some kind of sensory connection.

Yeon-woo fused all the required elements- the lunar seed from the elder, the power of all the 4 legendary beasts, and the core of energy of the mystical dragon.

With a sudden blast of energy, the majestic beast hatched into the world. A massive dragon-like beast with luscious mane and reddish-orange scales with deer-like antlers, truly a sight to behold.

The entire village gasped at the sight of the terrifying beast. However, unlike the mystical dragon, it possessed a demonic aura along with a body that closely resembled the Akasha Snake from the tutorial.

The magical dragon had the powers of all the 4 legendary beasts inside him, powers that are not supposed to co-exist. These four kinds of energy were shrouded with vicious demonic energy.

This demonic energy closely resembled the energy/aura of the demons that inhabited the 98th floor. The magical dragon mistook Yeon-woo as his previous master Jeong-woo.

Yeon-woo addressed his misunderstanding explaining that Jeong-woo and Yeon-woo are twins. Since mystical beasts are an alter ego of the disposition of their master, the beast ceases to exist in case of the death of the master.

The dragon told Yeon-woo that Jeong-woo terminated their contract as he was aware of his death beforehand.

Yeon-woo explained to the beast that he is in the tower to exact revenge from the people who killed his brother and eventually to destroy this tower as only then his anger would subside.

On seeing his conviction, the dragon beast accepted Yeon-woo as his new master and asked him to give him a name.

Be it looks, power, strength, our Yeon-woo lacks nowhere except his naming sense. On seeing the names, he has given to his shadow soldiers; one can easily make out that naming the magical beast would be a tedious task for him.

He decided to name the mighty beast ‘Growl,’ which hurt the ego of the majestic beast, and he didn’t go ahead with the contract. Only when Yeon-woo finds the name worthy of the beast, the dragon complete the contract.

Being in this dilemma, he asks for help from Edora and once again comes out with silly names. Later, the entire One-horned tribe members indulged in the game of naming but came out with another set of silly names, which annoyed the beast to this extent that he lost his will to scold.

Later, Yeon-woo decided to complete the task from the Abyss Turtle to find a suitable successor for their lineage. However, with all the 4 legendary beasts slew, the only option left for him was to forcefully create one, something that hasn’t been done in the history of the tower.

Gods have finally answered the calls of the restless fans that are turning in their sleep day in and day out. For the last few weeks, one new chapter is being consistently released every week. The next chapter, 93, is expected to release around 4 August 2021.

For those who are suckers for fantasy-based action-adventure genres, this series is a must-read. One can read this series on several platforms like shieldmanga.club and readsecondlife ranker.com. Stay tuned to know more.