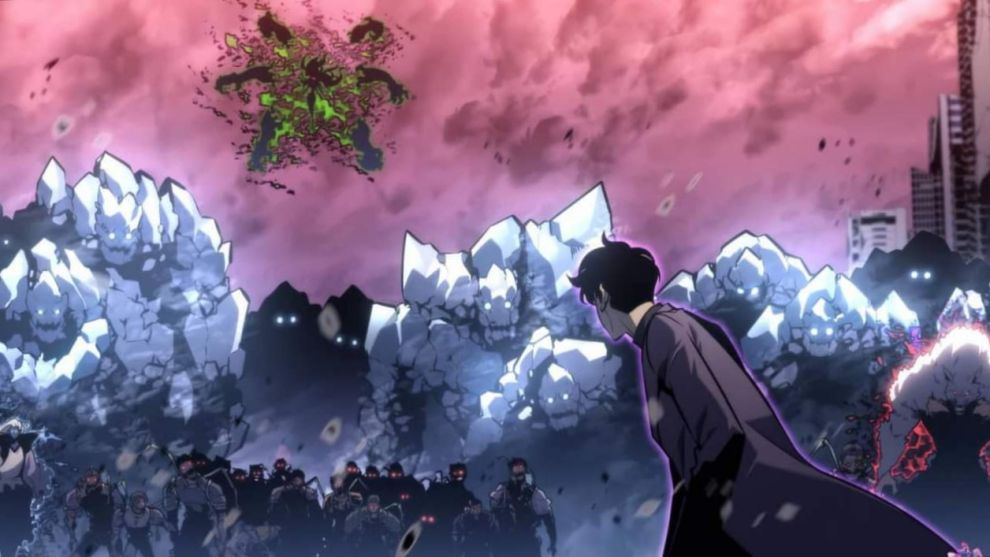 With the immense amount of action served to us in the Solo Leveling series, one can’t help but be excited. And so we bring to you an article on Solo Leveling Chapter 160 Spoilers & Release Date.

In Chapter 159 of the Solo Leveling series, we witnessed Sung Jin-Woo fight the Monarchs. He battled against the ice golems and the corpses controlled by the Sovereign of Plagues.

And with the Sovereign of Beastly Fang’s wrist regenerating, he too soon joined in. This is when we had Beru break free from ice prison and rush to aid his liege.

The barrage of attacks does not halt but Sung Jin-woo persists until he stabs the Ice Elf in the heart. He is soon met with an attack from the Sovereign of Beastly Fangs.

This causes some other Shadow Soldiers to break free from the ice prisons and follow Beru’s lead. The chapter ended with Sung Jin-Woo using a recovery skill and preparing for the second round of attack on the Sovereigns.

As per the novel, the fight between the Sovereigns and Sung Jin-Woo will most definitely heat up. Especially with the added help from his Shadow Soldier we can now have focused attacks from both sides.

As the series is known for its cliffhangers it is very much possible that the chapter will end here. Following this, we might get a little insight into the sovereign of Shadows.

Leaving the series on a cliffhanger is sure to get fans excited and anxious for the next chapter. The coming chapter 160 show has some big events coming up.

Chapter 160 of this series is set to be released on the 28th of July 2021. And it is sure to keep you entertained.

Where to Read Solo Leveling Chapter 160-

the series is nearly coming to an end in the upcoming months as per the novel. We can surely expect a lot of action and gain some insight into the history of the sovereigns.

And so we encourage fans to read the series. The chapters of the series can be read on official websites like Tappytoon.

With this we conclude the article on Solo Leveling Chapter 160 Spoilers and Release Date. We’ll be back again next week following the cliffhanger chapter so until then stay safe, stay tuned, and stay hyped.