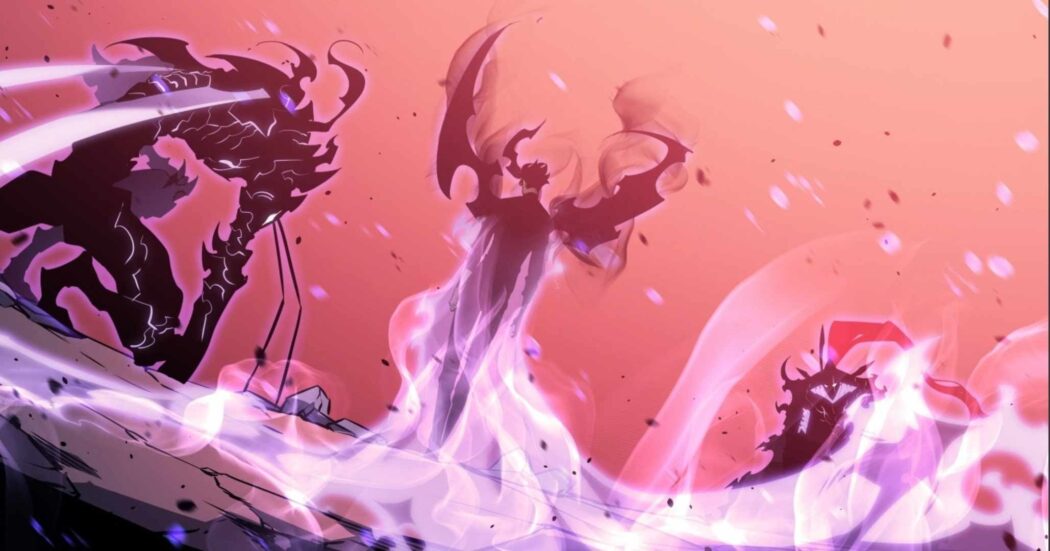 Today we bring to you Solo Leveling Chapter 165 Spoilers & Release Date. The spoilers noted below are from the ‘I Alone Level Up‘ novel.

Chapter 164 of the Solo Leveling series showed us the deletion of the system’s restrictions and power limits of Sung Jin Woo and shadow soldiers. This leads to the return of Ashborne, the Shadow Monarch, to the world of eternal void.

It also leads to the complete deletion of the system altogether. As all this is being done, we are shown the mysterious yet familiar savior.

This savior is recognized as the Fragment of Brilliant Light by the Monarch of Frost. And as most of us guessed, it is Sung Il Hwan, and thus he fights against the two monarchs.

In this fight, he manages to take on both monarchs at once. However, the fight is disrupted as the Beast Monarch senses the awakening of the Shadow Monarch and then leaves.

The agitated Monarch of Frost decides to destroy the entire area and so sends his most powerful attack. However, this is disrupted by Beru and the other shadow soldiers who have escaped from the frost prison.

Just as Sung Il Hwan is injured, we have the complete awakening of Sung Jin Woo as the Shadow Monarch.

Chapter 165 will showcase the power and authority of Sung Jin Woo as the Shadow Monarch. This will be shown as he tracks down the Beast Monarch and then deals with the Monarch of Frost.

The chapter will most likely end with the death of the Monarch of Frost. We could get an interaction between Sung Jin Woo and Sung Il Hwan. This may be followed by another tragedy in the life of Sung Jin Woo.

Chapter 165 of the Solo Leveling series is set to be released on 1st September 2021. And with two monarchs getting what they deserve, be sure not to miss it.

Where to Read Solo Leveling Chapter 165-

At this point, we’ve gotten most of the information to fill in the plot holes the main battle still awaits. And so fans keeping up with the series can read all of its chapters legally on Tappytoon.

With this, we conclude with our article on Solo Leveling Chapter 165 Spoilers & Release Date. So until we’re back with another article, stay safe, stay tuned, and stay hyped.