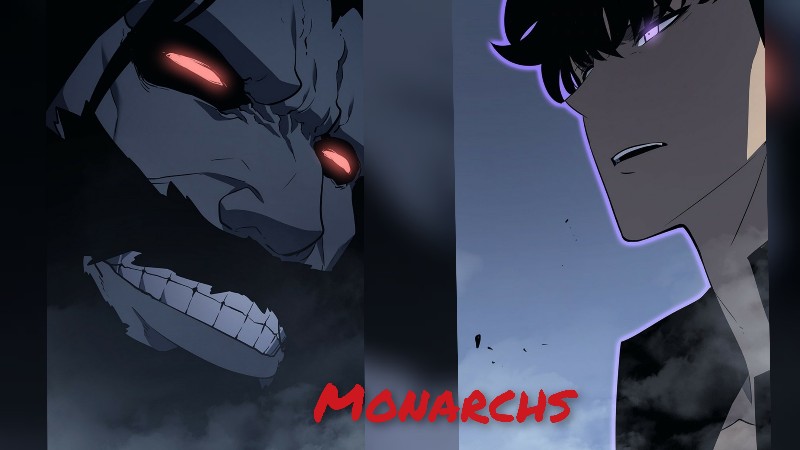 Hunter Sung Jin-Woo defeated the Boss Giant, but he was not the owner of the Dungeon. The owner is another monarch, the King of Giants, who is currently even stronger than hunter Sung Jin-Woo. But he is tightly chained by the Rulers and is demanding help. So, will hunter Sung Jin-Woo help him? You will get the answer to this question in this post.

The Giant Monarch will provide support to hunter Sung Jin-Woo against the Rulers in exchange for assistance. Sung Jin-Woo is well aware of his current situation that without any help, he is not potent enough to cease the Rulers. But he has many questions in his mind regarding trust. Hence the Giant Monarch has activated the Pledge of Honesty to deal with him. Now the truth of the past will unveil to us in the next chapter.

The latest chapter ended with the question, “Why the Rulers keep sending the Denizens to the Earth?” And as a response, the Giant Monarch smiled because he has already told the answer at the beginning of the conversation. Remember, the Denizens of the Chaos World who descended on the Earth were the remnants of the defeated army who were captured by the Rulers.

The Rulers leashed them for a long time in dungeons to invoke the natural monsters within them and control their minds by commanding them to kill all the humans. Therefore, the answer to the above question is the Rulers are preparing for the War. They will change this world into a suitable battlefield to engage the Monarchs in another warfare.

From the gates, the Rulers inject the magical energy into this world. Indeed, both monsters and magic energy blessings for peoples/hunters are coming from the same gates. The mana crystals, as well as mana stones that contain magical energy, are very useful in the modern world. In this way, the Rulers increase the footholds of the upcoming war.

Must Read- Power of all Monarchs in Solo Leveling: Strongest Monarch

According to Go Gun-Hee, the appearance of the gates has increased gradually all over the world. Also, in the past chapters, Sung Il Hwan already warned about the Great War. All these circumstances lead to one conclusion that the Rulers have begun their move.

Hunter Sung Jin-Woo will leave with no options because all the words spoken by the Giant Monarch are true. Hence, he will decide to free him from the magical chains. As he continues to unshackle him, his black heart will pound unexpectedly. He will feel a sense of uneasiness from him. But Jin-Woo will have no choice to reject him.

In the end, he will ask one last question from the Giant Monarch that by helping him means will you get to collaborate with humans? And as a result, the King will have no answer to this question. The Pledge of Truth won’t allow him to speak any further. This will clear all doubts of hunter Sung Jin-Woo, and he will assassinate the Giant King, the Sovereign of the Beginning.

Solo Leveling is a weekly scheduled manga; hence Chapter 138 will release next Thursday on February 4, 2021. Due to the different timings, in some regions, the chapter will release a day prior. The following will reveal all the truth regarding the Rulers and the Sovereigns.

Where to Read Solo Leveling Chapter 138-

Fans can read Solo Leveling Chapter 138 once it gets released on the official website of Solo Leveling or Mangadex. Chapter 137 is also available on Reddit. We will soon come back with another spoiler article regarding Solo Leveling. Till then, stay tuned with us.