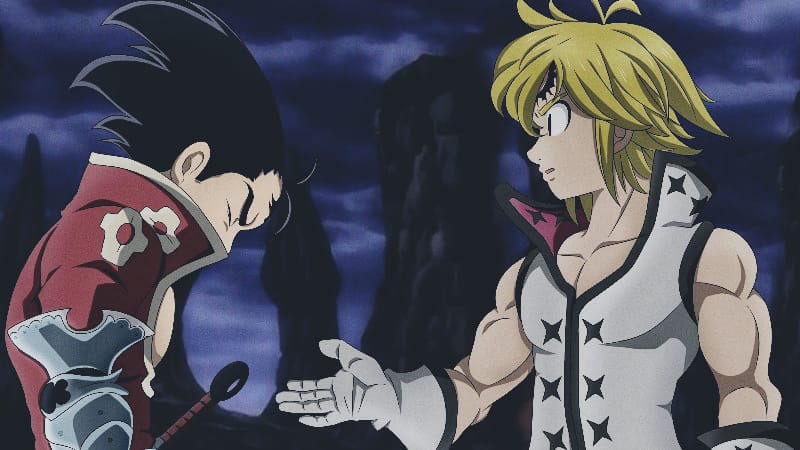 The recent episode unveiled the outstanding technique of Zeldris, i.e., Ominous Nebula. But the most driving technique has to be surpassed against the Pride. Everyone forgot that it’s noon, and Escanor unleashed all his power to transform into the One.

For this one minute of high noon, he became the reincarnation of invincibility and unparalleled strength that even surpasses Meliodas (assault form). Resultant, he nullified Zeldris’ Ominous Nebula and landed Divine Sword (Karate chop). In the end, he pierced his Divine Spear (finger) into Zeldris. So, will Escanor manage to kill him? Let’s discuss.

Before proceeding towards spoilers, we will explain the true nature of the Ominous Nebula that Zeldris used in the recent episode. The Ominous Nebula is a technique in which Zeldris accelerates the darkness within his own body and spirals it around him, creating a vortex that pulls all living things around him. Inside the vortex, everything that enters will be shredded to ribbons. This technique is called Full React.

The Seven Deadly Sins Season 5 Episode 4 will release under the title “The Victims of the Holy War.” The next episode will begin with the continuance of the one-sided fight between Escanor (The One) and Zeldris. Escanor will pierce his finger through Zeldris and kill him. But at the same instance, Chandler will use Grin Darkness, and Escanor will transform into his human form.

At that time, Demon King’s Power will dispel from Zeldris, and it will take approximately 1 second to react. And within this time, Ludociel will land God Shining, a flash of Divine Light on Zeldris. This will lead to the critical condition of his. However, Cusack will also join the battle along with Chandler to save the Prince.

Things will change as both efficacious fighters will be in an injured state. As time advances, Chandler and Cusack will show the high-rank demons’ true dark power that even surpasses the leader of the Four Archangels’ magic level. Cusack will badly defeat Ludociel.

The overwhelming power of two high-rank demons will crush the rescue team. At that time, only the Daughter of Belialuin will show the power of Infinity, the one she was born with. It will be interesting to witness the real power of the most potent Mage in history, Merlin.

The Seven Deadly Sins Season 5 Episode 4 will release next week, February 3, 2021. The timings of the official release will be different according to regions. Fans have to wait a few more days to witness the true form of Cusack and Chandler.

Where to Watch The Seven Deadly Sins Season 5 Episode 4-

Fans can watch the next episode upcoming week on TV Tokyo, BS TV Tokyo, and Netflix. We will be back next week with another spoiler article. Till then, stay tuned with us.