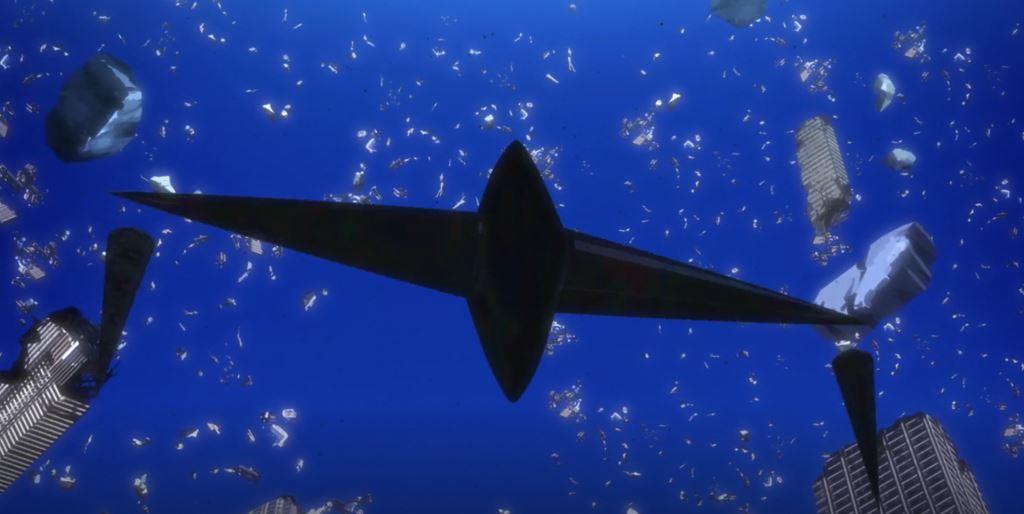 Kanto emerged victorious in its war with Kansai decades ago. Consequentially, Kanto ruled over Kansai and took control of everything from import and export to law and order. The only link between the two cities was the holy train Shinkansen which connected them. In episode 11 the Swindler, the Courier, and the siblings reached Kanto over Shinkansen. There they discovered the most unexpected and horrifying secret of Kanto.

Kanto was a void in turmoil, where even the laws of physics had loosened considerably due to unexplained experiments and wars. Then who was controlling Kansai and giving orders to the chief of executioners? Let us mention the explained reason.

There remained no living things, only debris floating in the gravity-less space around a shapeless black substance. That black substance was then found to be a quantum supercomputer, created after the war ended. The remaining people of Kanto had converted themselves into data and stored themselves in the computer.

It creates an imaginary Utopia, in which the person can live the happy moments of his life again and again giving them a life full of happiness. As the computer has its own physical longevity, it played the creation of the immortal siblings. As it tried to copy all its data into the siblings and become immortal itself. The hacker broke the sequence and saved all of them.

Episode 11 came to be quite a shock to all the viewers. Being an original story with no previous franchise, such a progression in the story was not expected at all. It seems that even the higher officials in Kansai aren’t aware of Kanto’s true state, thus, still thrive to be a part of Kanto. In the end, Kanto released the siblings but the Shinkansen got blown up by the Kansai police. The next episode harbors a final answer to all suspense created in the series and a befitting end to it. We will be back soon with more facts and news on Akudama Drive. Until then, stay tuned, stay hyped.