Hair color in anime is an entirely different species. Anime characters have colors that are not typically seen in humans! As in the manga, different hair colors are assigned to distinct characters to help the audience identify which character is which. So here are some top 10 anime characters with red and black hair. 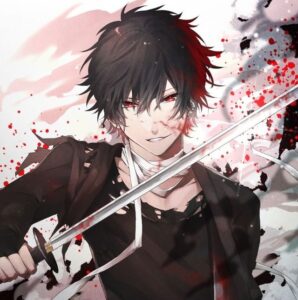 We’ve started our list of top 10 anime characters with red and black hair with Hizen Tadahiro, who is from the underrated anime series Touken Ranbu.

Hizen Tadahiro, together with Mutsunokami Yoshiyuki, were once the Sakamoto family’s household treasure. However, typical exaggeration puts Yoshiyuki as the sword Ryōma brought when he decided to leave Tosa; Hizen Tadahiro was the one who entrusted the sword to Ryōma. 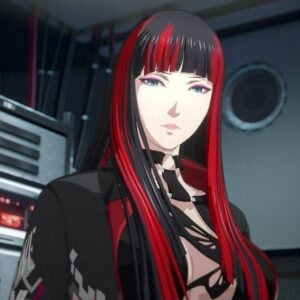 Kimie Kobayashi is a supporting character in the anime Night Head 2041 who has red and black hair that looks fantastic on her. The plot of the story revolves around a future where World War III wiped out roughly two-thirds of the human population in 2041, and faith in any religion is considered ludicrous in the emergent civilization.

The government formed a Special Weapons Enforcement squad to arrest and retrain such believers in order to keep civilians from believing potentially harmful thoughts. 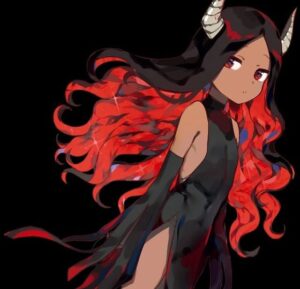 Maou (Demon Lord) is a supporting character in Jahy-sama wa Kujikenai anime. She is the ruler of the demon realm who got summoned into the human world and has been badly weakened after the demon realm’s devastation.

She has a huge appetite, frequently devouring vast amounts of food. She is a non-talkative demon with a lifeless expression on her face. 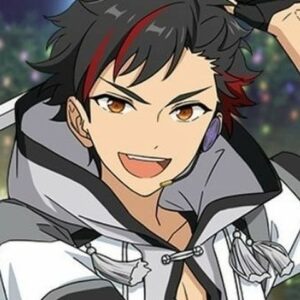 Ensemble stars is a Japanese game franchise that later on got its own anime adaptation. Tetora is a sincere, hardworking individual. His main objective is to become a “man among men,” which seems to become less evident as Tetora’s self-discovery quest progresses.

He places a significant value on abilities that are traditionally associated with femininity, such as cooking and sewing. Nagumo Tetora constantly offers to aid his friends during the crisis, going to extraordinary lengths for them once he has made a promise.

He has a great deal of energy and dislikes sitting still, and he’s always on the go, working toward whatever objective he seems to have in mind during the time. 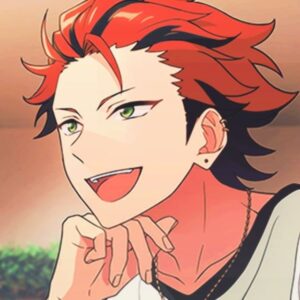 Kurou Kiryuu is also a character from the anime Ensemble stars. Kurou appears frightening at first because of his appearance; however, he is a nice person who struggles to express himself physically.

He wishes to protect others so that they do not suffer as he did. He has a big heart and tries to help people who trust him, but he will not hesitate to call out his pals if their actions are hurting others or are unethical.

As a result, he is prone to being extremely direct. After a traumatic experience in his past, he attempts to avoid real confrontation.

His family is everything to him. He’s been looking after his younger sister since their mother died, and as a result, he’s developed a sister complex. He also enrolled in the academy since he wanted to appear cool in front of his sister. He’s skilled at sewing and can make a variety of items, including embroidery on long jackets used by delinquents and pretty gowns. 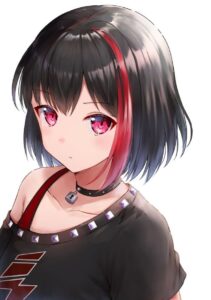 Mitake Ran is an anime character with red and black hair from the anime BanG Dream. She is afterglow’s main vocalist and rhythm guitarist who attends Haneoka Girls’ High School. Ran is the sole child of the masters of a flower arrangement school that has been in existence for over a century.

She has a strong will and despises losing. However, she also absolutely hates being alone. She is the type of person that values her childhood friends and family above anything else. She has no special interests.

Ran has an aloof demeanor that conceals her loneliness from others. She longs to get closer to people, yet she is socially uncomfortable and has a tendency to trip over her words.

She is easily agitated and somewhat hot-blooded. She keeps her issues to herself and dismisses others’ attempts to help, but the warmer side of her is best evident in her silent fondness for her friends, particularly the other members of afterglow.

Ran observes the other members while staying quiet and genuinely cares about them; she frequently inquires about their well-being and, albeit subtly, laughs at their jokes. 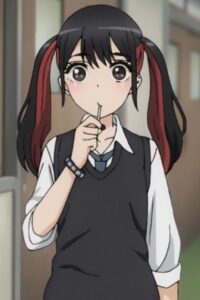 Nowa Sugaya is an anime character with red and black hair who appears in My Dress-Up Darling as a supporting character which is a Japanese romantic comedy anime series. She is a good friend of Marin Kitagawa, who is one of the series’ main protagonists.

She usually wears her school uniform with a black vest and usually is found with a lollipop in her mouth. 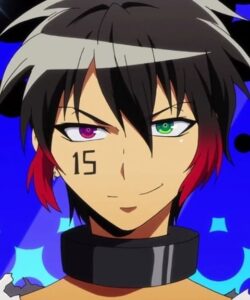 Jyugo is the main character in both the anime and web manga series named Nanbaka. He is currently imprisoned in Nanba. Jyugo is skillful enough to escape even prison by hacking security systems. He has escaped from a number of prisons. 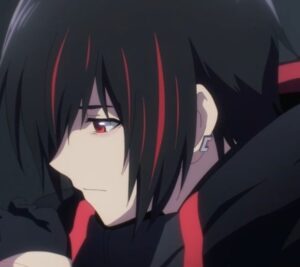 Yuito Sumeragi is an anime character with red and black hair and the main protagonist of the anime adaptation, Scarlet Nexus.

A cheerful and optimistic young man who is both strong-willed and caring. He is the Sumeragi family’s second son. He hails from a long history of politicians, with his father, Joe Sumeragi, currently serving as Prime Minister and his older brother Kaito serving as Chief of the Other Suppression Force.

As a child, Yuito was saved by OSF, and he’s wanted to join the OSF ever since so he could aid others, finally going through rigorous training to become a member.

He’s powerful and gentle, and he has psychokinesis, which allows him to manipulate items with his mind. 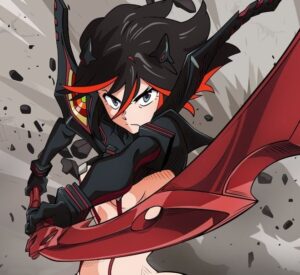 Ryuko Matoi is an anime character with red and black hair in the anime and manga Kill la Kill and is also the main protagonist. She is a nomadic transfer student who arrives at Honnji Academy in search of the other half of a red Scissor Blade she is carrying, as well as the person who murdered her father.

Ryuko, Satsuki, and other characters gain martial arts superpowers through their clothing, which appear to have their own mind.

In most instances, the color of an anime character’s hair is believed to be a hint towards their personality and role in the plot rather than a reflection of their true hair color or a racial stereotype. Hope you liked the list of 10 anime characters with red and black hair.