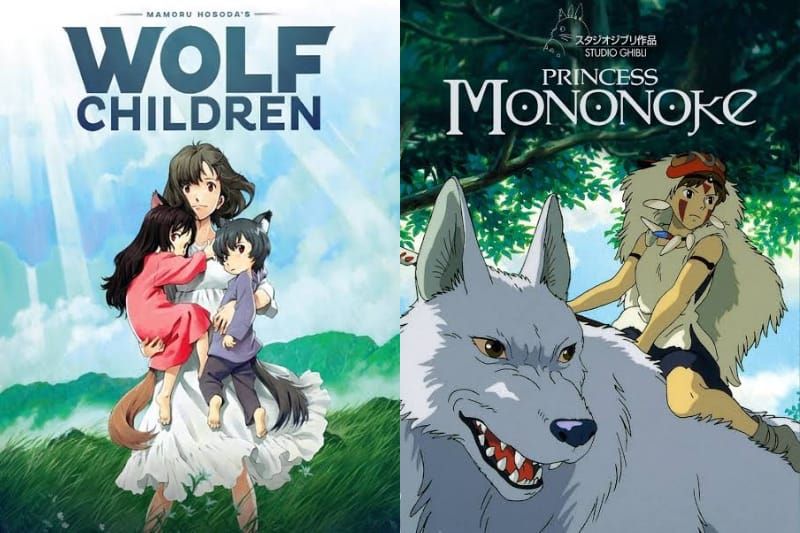 There are numerous anime series that feature wolves. However, there are only a few anime movies with wolves, which is why they are difficult to find. But don’t worry, we’ve put together a fantastic list of the top 20 anime movies with wolves as of 2022. Let’s get started with the list, which was ranked based on their IMDb rating.

20. Flight of the White Wolf

Flight of the White Wolf is a Japanese animated film that was directed by Yosei Maeda. This anime film was first released on April 28th, 1990, in Japan.

The plot of this anime follows a young boy, Lasset. He resides in a rural area in the US north on a farm. It excellently depicts Lasset’s struggle to save the life of a wolf he raised from a puppy.

Luger Code 1951 is one of the best anime movies with wolves. It was directed by Shinya Takahashi and was released in 2015.

It tells the story of a brilliant professor who is highly skilled at learning any type of language. Due to his excellent command of the language, he was selected by the Allied Cryptanalysis Department to encrypt the werewolf’s code. However, he can’t be able to detect the language, and to do that, he needs a living werewolf.

Mass Effect: Paragon Lost is a Japanese-American animated film. It was directed by Atsushi Takeuchi and written by Henry Gilroy. It mainly follows James Vega, the leader of an elite special force.

He, along with his squad, fights several mysterious species, i.e., aliens, to protect his planet. He faces several difficulties in leading his team due to being the new leader of his squad. It is a good choice to experience the battle between humans and wolf-type aliens.

It is one of the most popular anime movies in the Pokemon franchise. It was directed by Kunihiko Yuyama and was released in 2010. It mainly focuses on Zoroark, a wolf-type dark Pokemon, and its incredible power and abilities.

Zoroark can create terrifying illusions that can haunt even the most ordinary Pokemon. It is also very hard to catch Zoroark, but whoever tries to do it will be trapped in its illusion.

Gekijoban Dobutsu no Mori is one of the best-animated films for kids and was directed by Joji Shimura. It is mainly based on the Animal Crossing video game and depicts the story of a young girl, Ai.

Ai is newly shifted to an animal village filled with numerous animals such as cats, elephants, eagles, wolves, monkeys, gorillas, and many more. She gradually started to become friends with all of them and spent most of her time with them.

This movie is beautifully animated and has a very simple storyline that kids find very adorable and interesting.

Dante’s Inferno: An Animated Epic is a great fighting movie that was directed by seven directors. It is mainly based on Dante’s Inferno, a popular video game developed by Visceral Games.

It demonstrates the incredible adventures of Dante, a powerful warrior who travels to different parts of hell. During his adventure, he fights with several powerful demons and monsters, some of which have wolf-like appearances.

Due to his flawless battle against the king of hell, Lucifer, this movie became so popular among fans. I highly recommend you watch this incredible film and experience its deadliest battles.

It is the final film in the series and was directed by Kazuya Nomura. This movie depicts the end of the Sengoku Era and is mainly focused on Date Masamune and Sanada Yukimura.

They were both incredibly strong and possessed excellent swordsmanship skills. Even with their incredible skills, they face difficulties against Mitsunari. But they have to defeat him to bring peace to their country.

The Dear King is an excellent anime movie directed by Masashi Ando and Masayuki Miyaji and was released in 2021. It depicts the stories of Van, a soldier, and Yuna, a young girl, who are the only survivors of a wild dog’s attack.

Their attack spread Black Wolf Fever, a lethal disease that kills everyone. After surviving the attack, Van and Yuna struggle to live and face many problems.

12. Pokemon: Lucario and the Mystery of Mew

It is one of the best Pokemon anime movies ever, directed by Kunihiko Yuyama, and was released in 2005. It is mainly focused on Lucario, a wolf-type Pokemon, and its incredible powers and abilities.

Lucario can sense aura and manipulate it to the maximum extent of his own will. Throughout the movie, it demonstrates its great strength by winning several pokemon battles against powerful pokemon.

11. Fuse: Memoirs of a Huntress

Fuse: Memoirs of a Huntress is a folklore anime film that was directed by Masayuki Miyaji and produced by TMS Entertainment.

This anime follows a girl named Hamaji who comes to Ireland with her brother on a mission to kill Fuses. Fuses are hybrids of wolves and humans who consume the souls of others.

After they kill Fuse, they understand Fuse’s feelings, and their mission will be changed from that point.

Ringing Bell is one of the best anime movies with wolves, especially for children. It was directed by Masami Hata and was released in 1978.

It mainly focuses on a young lamb named Chirin who lives happily on a farm alongside his mother. However, one night, the farm is attacked by a group of wolves, and during the process, he loses his mother.

It is a great family anime movie that shows you an interesting and shocking story.

9. Inuyasha the Movie: Fire on the Mystic Island

Fire on the Mystic Island is the last film of the Inuyasha anime series. It was directed by Toshiya Shinohara and was released in 2004.

It depicts the story of Inuyasha and his friends and how he protects the half-demon children from the four war gods. These war gods were incredibly powerful and possessed plenty of mysterious powers.

Inuyasha also used his demonic traits to the highest extent and showed some of his new powerful attacks.

Shiroi Kiba White Fang Monogatari is one of the classic anime movies with wolves, directed by Soji Yoshikawa. It is set in Alaska, Iceland where a young boy named Mit-sah lives with his father.

One day, while walking around the forest, he, unfortunately, found a white fang, a hybrid of wolf and dog. Due to his dream of owning a dog, he brought him to his house and lived alongside him.

This movie is a good pick to explore the unbounded love of brotherhood between a human boy and a wolf.

7. The Witcher: Nightmare of the Wolf

It is an adult animated film that was directed by Kwang Il Han and written by Beau DeMayo. It is also one of the best anime movies on Netflix and was released in 2021.

However, as he tries to become more popular, he must confront the demons of his past. In this movie, a witcher is considered to be a wolf because of their job of hunting down monsters.

6. Inuyasha the Movie: The Castle Beyond the Looking Glass

The Castle Beyond the Looking Glass is the second anime movie in the Inuyasha series. It was also directed by Toshiya Shinohara and was released in 2002.

This movie depicts the story of Inuyasha, a wolf-type boy who only wants to be brought back to his ordinary life. However, Kaguya, a new character, appeared and began to create problems for Inuyasha and his friends.

It shows us some of the excellent fighting sequences that bind you to the end.

5. InuYasha the Movie 3: Swords of an Honorable Ruler

Swords of an Honorable Ruler is the best movie in the Inuyasha series and was directed by Toshiya Shinohara. The main character of this film is Inuyasha, a half-human, half-demon who has wolf-like fangs and ears.

In this film, Inuyasha works alongside his brother, Sesshomaru, to seal his father’s awakened sword. It has lots of incredible action sequences that you will surely like.

Ghost in the Shell 2.0 is a well-known fighting movie directed by Mamoru Oshii. This film is based on a manga of the same name by Masamune Shirow.

This anime follows Motoko Kusanagi, the leader of an unofficial cyborg unit. During her mission, she meets several mysterious species and fights against them. Her ultimate reason for all these missions is to uncover the puppet master, an unidentified hacker.

It contains a lot of gun fighting and hand-to-hand combat that provide you with a great experience.

The Wolfwalkers was directed by Tomm Moore and Ross Stewart. This film was first released at the Toronto International Film Festival (TIFF) in 2020.

It tells the story of Robyn Goodfellow, who recently shifted to Ireland alongside his father. They needed a new place for their mission, which is why they shifted to Ireland. In Ireland, they befriend a girl named Mebh, who turns into a wolf at night.

After being friends with Mebh, they find many secrets related to wolfwalkers and their ultimate mission.

Wolf Children is one of the greatest anime movies with wolves and was directed by Mamoru Hosoda. It depicts the story of Hana, an attractive human lady who falls in love with a werewolf and marries him.

After the sudden death of her husband, she raised her two half-human, half-wolf children on her own. This film shows the unbounded love of mother and child even though they belong to different species, such as wolves.

I personally recommend you watch this beautiful movie with your mom and child at once.

Princess Mononoke is one of the best anime movies with wolves, directed by Hayao Miyazaki. This film depicts the story of a young prince, Ashitaka, who fights several monsters to save his village.

He lives alongside his giant white wolf, Moro, who has godly power and intelligence. Later in the film, he and Moro embark on an adventure to find the cure for the curse to save their village from monsters.

It is a great pick to explore the power of the wolf’s god and experience its excellent battle against monsters.

We’ll conclude this article by discussing each anime film on the list. This amazing list was created by combining IMDb ratings (2022) and fan popularity. Each film includes a variety of wolves and a fantastic plot that you will thoroughly enjoy.