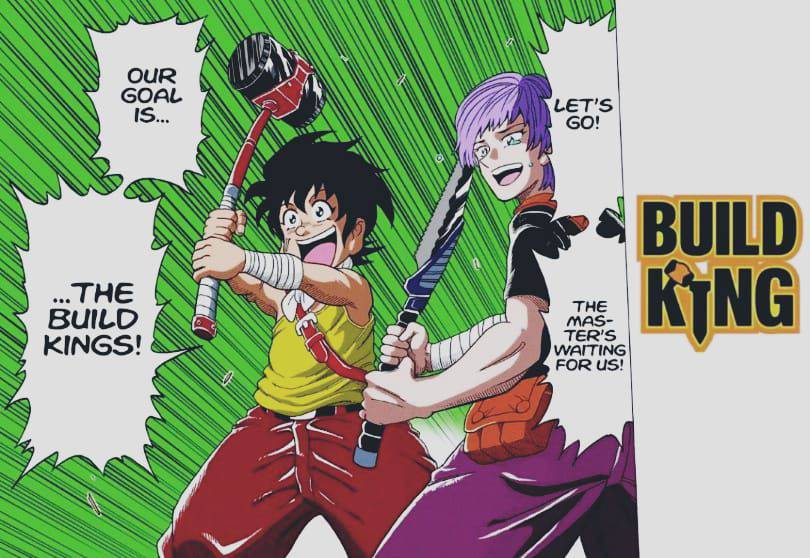 It is written and illustrated by Mitsutoshi Shimabukuro. With the release of only one-shot, it gets popular within the otakus.

Only 2 chapters of Build King has surfaced till now. And it has secured 18th position among Shonen Jump Manga with an average view of 92k.

The plot of Build King is totally different from the other manga. Thanks to Mitsutoshi sensei to bestow us the story with an unimaginable plot.

Build King is a weekly scheduled Japanese manga that has begun on November 15, 2020.

Moreover, a week later, the second chapter got surfaced.  Therefore, in this post, we will discuss this series’s plot and the next chapter’s release date.

What is Build King?-

Over ancient times, miraculous structures had been built beyond one’s wildest dreams.

Some examples are the Giant Mountain range Condos, the Dark Castle afloat on Magma, the Gold Hotel in the Sea of Clouds, and the Underworld Prison.

These fantasy areas have experienced many types of natural disasters, and they still are standing over the years.

No one knows how these buildings were built and who made them. Those buildings are usually categorized as Build Kings.

Build King is the action genre consists of the adventure of the builders. In various manga series, we have seen potent antagonists and their castles.

So, Mitsutoshi thought something different; he has covered the part of the builder who had constructed these castles in unattainable regions.

The Demon Castle, the Fairy Realm, the Dragon’s Dungeon, and the God Palace in the sky, there was a builder behind every building.

Without builders and incredible buildings, we can’t imagine the beginning of any manga series.

Therefore, it is imperative to witness the story of these carpenters.

The tale has started with the adventure of two boys Tonkachi and Renga, on Hammer Island.

Three years ago, these two boys were gone through harsh training under Master Carpenter Shovel.

He taught them basic lessons of carpentry and the true meaning of Build King. After that, he left them on Hammer Island for two years.

Their only task is to build a house and live in this rigid environment.

Tonkachi and Renga have to build a house that even the boss of the House-Eaters can’t destroy.

Renga is the younger brother who is an expert in building a house.

On the other hand, Tonkachi only knows the basics of carpentry, so every time he made the house, the House-eaters destroyed it in no time.

Therefore, at all times, he spent the night in Renga’s house. His house is made of steel, and the House-Eaters couldn’t wreck down.

But one day, the boss of the House-Eaters came outside and even smashed Renga’s house. So, in the end, Tonkachi defeated the boss with his hammer and raw strength.

And from this way, the story of two boys has begun with the dream that they will become the Master Carpenter and construct a Build King one day.

Recently, Build King has surfaced its two new chapters and the upcoming release will officially air on November 29, 2020.