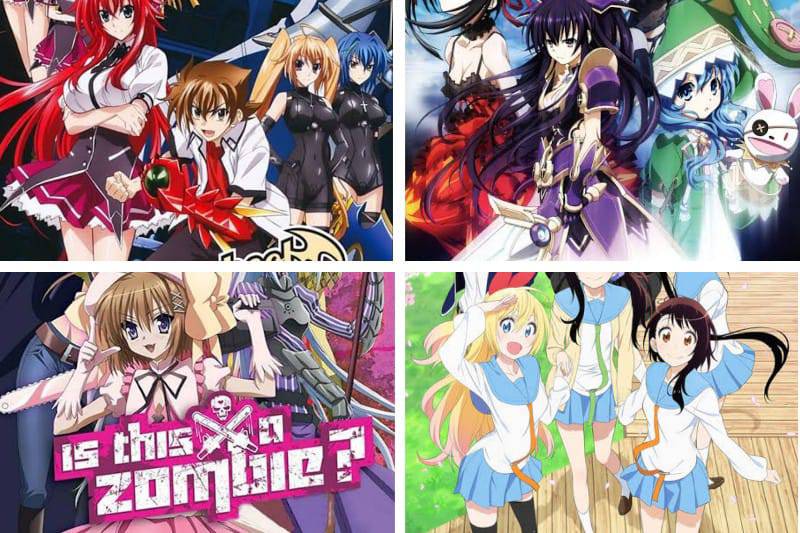 In Japanese anime and manga, a harem is a narrative in which a male character is surrounded and adored by a large number of female characters.

The females are usually romantically engaged with the main character. In anime, manga, and other forms of media, this genre is typically a subset of romance, humor, or action.

Here is the list of the top 15 Harem anime on Funimation; the ranking is done on the bases of IMDb ratings. 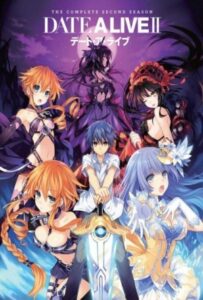 At number 15 on the list of “Best Harem Anime on Funimation” is “Date A Live II,” which is the sequel to the harem series “Date a Live.” Previously, in Date A Live Shido Itsuka, after meeting a spirit, he discovers that he has an ability that can seal the spirit’s power.

So here in this plot, it’s Shido who is the only one with this ability. He again puts himself through dangerous situations, which as going on dates with beautiful spirits. 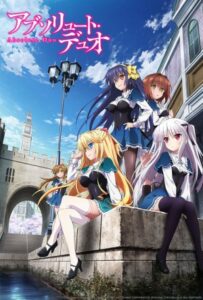 The story of Absolute Duo is told from the perspective of Tor, the primary male protagonist, as he enters Koryo Academy, a high school for Exceeds, artificially made people.

Although they are fundamentally human, they have stronger bodies, move more quickly, and can materialize their souls as a weapon. To become future peacekeepers, students at Koryo Academy battle, practice, and study using these spirit weapons called Blaze.

Those who can create weapons out of their souls are known as “Blazers,” and they attend Kouryou Academy High School to develop their skills. To increase their chances of one day achieving the power of Absolute Duo, each trainee is needed to team with another. 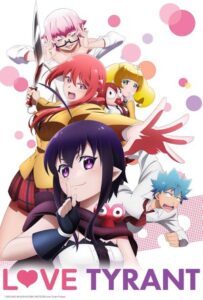 The show centers on Seiji Aino, a high school student who finds himself stuck in a polyamorous relationship with four different women: the obnoxious angel cupid Guri, the brutally obsessed Akane Hiyama, the quiet but fiercely protective Yuzu Kichougasaki, and the merciless psycho Shikimi Shiramine.

With all normality removed from his life, Seiji is forced to work as a matchmaker alongside these crazy girls. 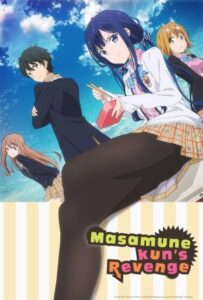 Masamune Makabe befriended a girl named Aki Adagaki as a kid, but she cruelly rejected him after his love confession and called him “Piggy,” as he was an overweight child forcing him to go through various dieting and workouts.

He’s also determined to seek revenge on Aki by gradually developing a relationship with her and then shattering her heart when the time is appropriate.

Masamune is conflicted about how he should approach Aki as their friendship deepens, and he starts to wonder about the goals of his cunning plans and whether seeing them through is what his heart truly craves. 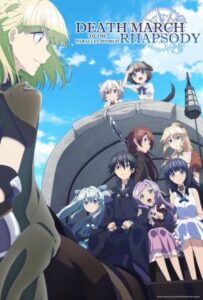 Chirou Suzuki, who is a programmer in his thirties, is overburdened with work. He finally has a chance to catch up on sleep after working himself to exhaustion, only to awaken to find himself in an RPG fantasy world that is a mashup of the games he was testing.

Inside the game, he is Satou, a 15-year-old. Although he initially believes he is daydreaming, his encounters seem quite real. He eventually annihilates an army of lizard men and earns a high-level adventurer rank due to a strong skill he wields but rarely uses.

Satou now embarks on an exploration of this fantastical new realm as a high-leveled adventurer with a variety of abilities and no means to return to reality. 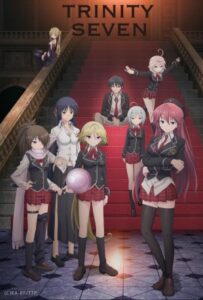 Kasuna Arata, the lead character, wakes up one morning to discover his life has completely changed when a supernatural calamity called a “Breakdown Phenomenon” wrecks his town and kills his childhood friend.

He decides to enroll at a magical school tasked with teaching magicians how to deal with these catastrophes after acquiring a Grimoire (a book of spells).

Now that he is enrolled and working on his training, he is up against a group that wants to end the world, has a harem of dangerous magicians at his back, and is in danger of being destroyed by his newly discovered skills while the fate of the entire world hangs in his hands. 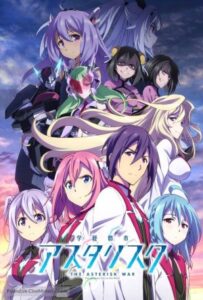 During the 20th century, an unimaginable catastrophe was brought on by the meteorite storm known as Invertia. There were countless cities destroyed worldwide as a result of this catastrophe.

A mysterious substance known as mana was found inside the meteor. It enabled human technology to advance quickly, giving rise to a new breed of super-powered people known as Genestella.

The Festas (Star Warrior Festivals) organize fights between Genestella and Rikka, also known as “Asterisk,” a metropolis of six academies.

Ayato Amagiri, a scholarship student, enrolled in Seidkan Academy after transferring there to carry out his own goal and make a promise to battle in this city. 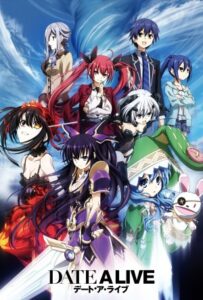 Thirty years prior, a bizarre event known as a “space quake” destroyed Eurasia’s center, causing the deaths of 150 million people. Smaller spacequakes have plagued the world on an occasional basis since then.

A regular high-school student named Shid Itsuka meets a girl close to a spacequake and discovers through his sister Kotori that she is one of the “Spirits” who are the true cause of the spacequakes that occur when they appear on the Earth.

He also discovers that Kotori is the captain of the aircraft Ratatoskr and hires him to use his enigmatic ability to seal the Spirits’ energies and prevent them from becoming a threat to humanity. There is, however, a catch: to seal a spirit, he must date her. 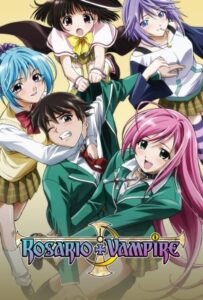 Tsukune Aono is an ordinary high-school student who has not been able to get admission to any private school of his liking. By a rare chance, the sole school to accept him proves to be anything but typical; students that attend the school are youkai dressed as humans.

When he attempts to flee out of fear for his life, he only manages to run into Moka Akashiya, a pretty girl who also happens to be a vampire. With this, Tsukune chooses to remain at the school, concealing his human behavior from both students and teachers.

This comes at number 7 on the list of “Best Harem Anime on Funimation.“ 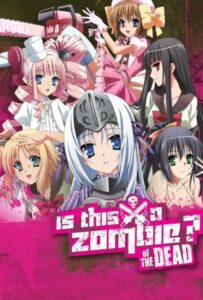 Ayumu Aikawa is a 16-year-old high school student who was tragically killed while looking into a shady house. He soon wakes up next to an armored girl named Eucliwood Hellscythe. She introduces herself as a necromancer who has resurrected Ayumu, transforming him into a zombie.

Ayumu is now immortal and sets out to find his murderer. One day, while hunting in a cemetery, he comes across Haruna, a little girl dressed as a magical girl who is fighting a beast. Haruna tries to wipe Ayumu’s memories of her after she kills the beast, but accidentally he takes her magic for himself.

Robbed of her powers, Haruna now orders Ayumu to do her job for her, which is hunting bizarre creatures known as “Megalo,” monsters who roam the human world and frighten the people.

5. Saekano: How to Raise a Boring Girlfriend 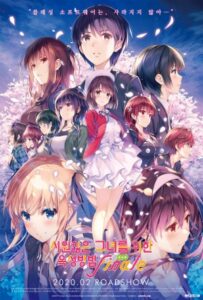 To support his visual novel game, Tomoya Aki, a high school student, does a part-time job. Wanting to make a graphic computer game. He seeks the assistance of illustrator Eriri and bestselling author Utaha for this task.

Tomoya then invites Megumi, his classmate, to play the game’s “heroine,” eventually forming a production team, “Blessing Software.” However, to connect to the feelings required for an engaging visual novel, he and his “super team” must first feel these emotions.

The series covers their adventures in making the game, as well as their ambitions to market it at the Comiket convention, as well as the team’s emotional complexities.

4. How Not to Summon a Demon Lord 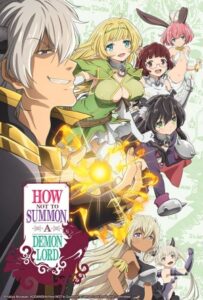 At number 4 on the list of “Best Harem Anime on Funimation” is “How Not to Summon a Demon Lord.” Takuma Sakamoto is an ordinary guy who gets summoned into a different realm, which turns out to be his favorite game, taking on his in-game character appearance, which is Demon Lord Diablo.

Upon arriving, the two girls who brought him into this world try to put a spell on him to make him their slave, but unfortunately for them, the spell backfires and makes them his slaves instead.

Now Takuma travels with these two girls to find a way to get rid of this spell and to find out why he was summoned into this world. 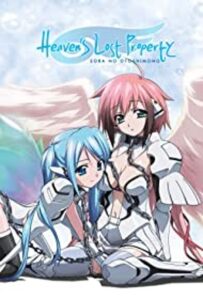 Tomoki Sakurai is a perverted teen whose mantra is peace is the greatest. He frequently has a dream about a mysterious girl who asks for his help, but he can’t quite remember her face after he gets up.

One Unidentified Mysterious Animal crashed nearby one night while he was watching a strange phenomenon in the sky. Tomoki realizes that the object that fell from the sky is a winged female humanoid called Ikaros from the unknown world of Synapse, who quickly proclaims herself Tomoki’s servant.

From then on, more entities are known as “Angeloids” approach, disrupting his peace but also bringing him pleasant things and fighting the forces that fall upon Earth. 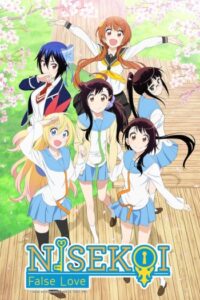 Raku Ichijo made a secret promise to his childhood love when he was a kid, holding a locket as a remembrance while his sweetheart kept the key.

He fantasizes about reuniting with his old girlfriend, but reality messes with his plans after Chitoge Kirisaki unintentionally knees him in the face.

Raku is a regular high school student, although his father is the leader of the famous gang, the Shuei-Gumi faction. And he is pulled into family problems when he is pressured into dating Chitoge, the daughter of the leader of a rival gang. 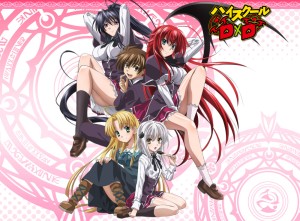 At number 1 on the list of “Best Harem Anime on Funimation” is “High School DxD.” The story centers around Issei Hyodo, a dim-witted, perverted second-year high school student who is murdered on his first date by a girl.

Issei is revived as a demon, and he now works as an underling for Riasu after being recruited by her into her club of high-class devils. She also happens to be the most attractive girl in his school.

Hope like this list of harem anime on Funimation. We will be back with another ranking article. Till then stay tuned with us and read the articles mentioned below.