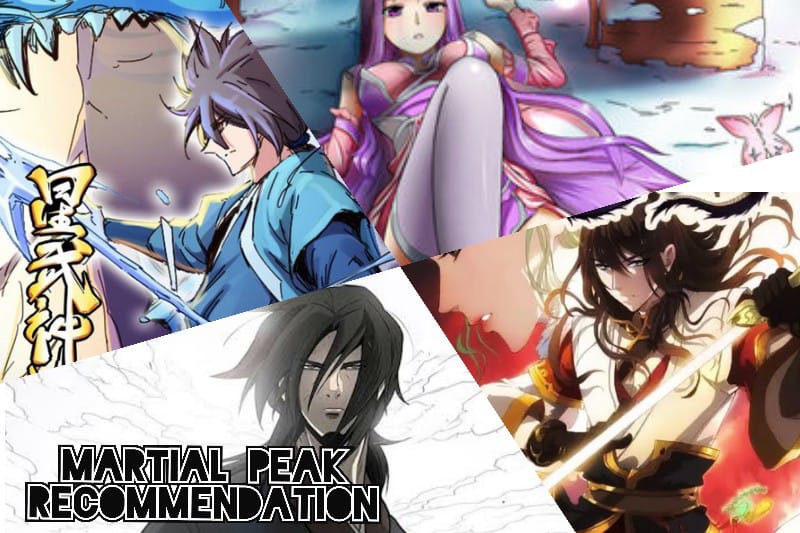 Martial Peak is a great cultivation manga combined with martial arts. It is one of the hottest topics out there with its incredible plot and story build-up.

It is natural for people to find other stories similar to it. So here is a list of the top 15 manhwa/manhua/manga-like Martial Peak.

It can never be a great thing for the main character of a series to belong from the branch of a great family. Things will never look good when the branch family has to literally live in the shadows of the main family in the countryside.

Luckily for him, one day, he gets the chance to transport himself to a different world where time passes differently from the real world. He trains himself hard and comes back to his family to take up the responsibilities all by himself.

The character in focus in this story is Ye Ming. Similar to most main characters in a story, his childhood was destroyed after his father and mother were wrecked. It was made worse when none of his family members made any effort to get revenge for him.

As a result, he had to take all the matters into his own hand and train hard day and night. But his family went a step further and wrecked his meridians which destroyed with any hope left for him.

In a strange turn of events, he comes in possession of the treasures of an old man when he tries to attack him and tries to use them to avenge his mother and father.

Our protagonist of this story lives in the countryside and tries to train properly in martial arts. As we know, the law of the world in most stories states that the weak will get dominated by the strong.

The same thing happened in his case and despite his family not leaving any stones unturned for his training, he did not seem to make any real progress.

The reason for this turned out to be a spirit inside him which came out one day. Now, he must continue his training regime under the guidance of the ghost and become a proficient martial artist.

Our main character in Against the Gods had great support from his family. Although he did not make much ground in cultivation, his effort and desire were up to the mark.

An extremely unfortunate event leads him to flee his house, and he gets poisoned by his brother in that process. He is reincarnated in another world where he deeply studies medicine but ends up dying there too.

Luckily he gets born at the moment just before he is about to get poisoned by his brother. He gets a second shot at life and decides to use it wisely this time.

Soul Land can be categorized as an Isekai manga since our protagonist gets reborn in a different world. Previously he was a genius who wanted to know the eternal truth of the sect.

However, it was forbidden, and he got chased by the members, which caused him to take his own life. After his death, he is born again as the son of a blacksmith, where he gets possessed a weak spirit.

Now it remains to be seen if he can survive in a world where everyone’s worth is measured by the value of their spirit.

Our protagonist in Spirit Sword Master gets a shot at another life. This is similar to Martial Peak, where he starts his second life at a relatively weak state and slowly scales up in power.

All of his family members from his previous life were crushed, but since he still possesses his memories from his past life. So he uses that to train himself with only revenge on his mind.

Xiao Yun’s world is filled with martial arts. In such a world, he sets a vow to rise to the top of Combat Qi and make a name for himself.

He sets out on his journey in a world where cultivation is equally important to succeed. Battle through the Heavens is a great mix of cultivation with martial arts, which is what makes it so intriguing.

The story setting of Martial God Asura is based on the nine provinces. Everything was going on normally in all the provinces until one day, a strange phenomenon occurred. No one could explain the reasons behind it, and it was shrouded in mystery.

Meanwhile, Chu Feng is a normal student of the Azure Dragon School. Fast forward five years and a mysterious lightning beast awakens within him in the form of an egg.

It is not a stretch to say that this incident is going to change his life forever. Will Chu be able to adapt to all the challenges that will come alongside it?

Cheon Yeo Woon is an orphan from a Demonic Cult who puts his life in danger. One sudden day his descendant from the future comes to meet him and inserts a nanomachine into his body. Naturally, it has major consequences, and it changes his life completely.

This nanomachine allows him to surpass the Demonic Cult and become one of the best martial artists. But the journey to reaching the top is not going to be easy, and he has to overcome all the obstacles in his way.

In this manhua, we see the story of Luo Zheng, who had a rocky start to his childhood. Not only his father died, but his family started treating him like a slave. But fate decides to smile upon him at last when he finds his father’s book.

When he opens it, nine dragons fly into his body. This is a turning moment in Luo Zheng’s life as he gets immense help in his cultivation by the nine dragons. A slim chance may fall before him now whereby he can escape his family and change his life for the better.

This is a tale of another main character getting reincarnated in a different world, and the character in the discussion here is Nie Li. He gets into a tough battle with a Sage Emperor and dies at his hands.

This leads to him being born as a 13-year-old and a chance to avenge everything that has happened. But will he be able to protect the ones he loves in his second life?

This story starts with the Northern Heavenly Sect, which is renowned for saving the world. But things change when their leader dies, and no one seems to know anything about them.

Now the son of the deceased leader has to take matters into his own hands as he learns a new technique left behind by his father. This will train him perfectly and make him prepare for the future wars that are yet to come.

It is never a good thing to get betrayed, and it is even worse when the betrayer is your own brother. Our main character finds himself in a similar scenario and gets a second shot at life almost a thousand years later.

At that moment, he has only one thing in his mind, and that is revenge. But to take revenge, he has to find his brother first, and naturally, he is unable to do so since thousand years have passed since the incident.

God of Martial Arts brings together the bodies of two people who kind of had miserable lives previously. The protagonist of this series wakes up in the body of a cultivator in a world of martial arts.

Coincidentally it is the body of a son of a sect leader who has weak spiritual roots. But once he gets that body, he suddenly becomes immensely strong, gaining praise from everyone around him.

The main question that arises now is that whether this situation is sustainable or will it go back to the old days soon.

The protagonist of the Star Martial God technique is a weak character who slowly scales up in power. The fact that he belongs to a weak family also does not help his cause.

One day when he returns home, he gets to meet a bluefish which proves to be the turning moment in his life. It marks a new journey for our character as he looks to embrace it and leave his weak past behind.

This concludes our list of the top 15 manhua/manhwa/manga like Martial Peak. Martial Peak is undoubtedly the best of the lot, but if you are looking for something different, you can also try these out.