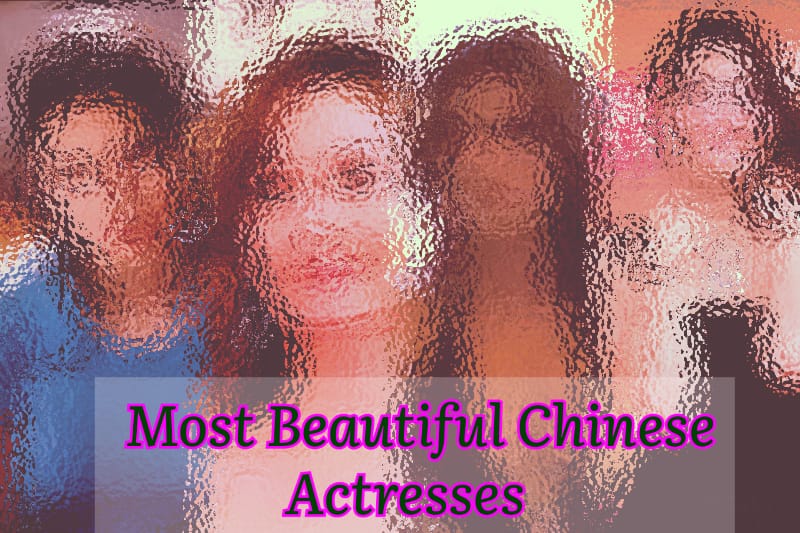 China boasts one of the biggest movie industries in the world with its beautiful and talented actresses. Hence, today we will be listing the Top 15 Most Beautiful Chinese Actresses Ranked (2023).

Nowadays, the Asian entertainment industries are getting more recognition than ever, so it is natural to be curious about the gorgeous actresses of China. We definitely and sadly cannot mention all the deserving contenders here, so forgive us for leaving many.

Now without wasting any time, go ahead and read our picks for the Top 15 Most Beautiful Chinese Actresses Ranked (2023).

The very next year, she was also selected as the Olympic Babies and performed at the closing ceremony of the Athens 2004 Summer Olympics. It was with the film Carol of Zhenguan with which she made her official debut.

Li Qin is one of the most beautiful chinese actresses of all time. This Chinese actress graduated from the Shanghai Theatre Academy in the traditional Chinese opera called Kunqu. She debuted with the series The Dream of Red Mansions, and through that, she got notable success.

It earned her the award of Best New Actress at the TVS Award Ceremony. Her debut film The Founding of a Party also gave her the nomination for the Best Newcomer Award at the 31st Hundred Flowers Awards.

Fan Bingbing is one of the most beautiful Chinese actresses who is also one of the highest-paid actresses in China. She debuted with the series Powerful Woman and only acted in minor roles for some time.

But it was with the series My Fair Princess, where she got a proper role. The film Cell Phone provided her groundbreaking success as it went on to become one of the highest-grossing films of China.

Zhang Ziyi is a veteran actress who is considered one of the four most bankable actresses of China. She has won many accolades for her acting and was nominated for Golden Globe Awards, Bafta, etc.

She debuted with the film Touching Starlight at the mere age of 16. After that, she acted in many record-breaking films which gave her international fame like Crouching Tiger, Hidden Dragon, Rush Hour 2, etc.

Popular Movies/ Dramas: The Legend of White Snake, Love Under the Full Moon, In a Class of Her Own

Ju Jingyi is a multi-talented actress who also excels in dancing and singing. She first started her career as a member of the Chinese pop group SNH48.

Her acting debut happened with the drama Novoland: The Castle in the Sky, where she got the role of the female protagonist. But it was the historical drama Legend of Yunxi that accelerated her fame to new heights as it became a commercial hit.

Popular Movies/ Dramas: The Heaven Sword and Dragon Saber, War and Beauty, The Charm Beneath, The Dance of Passion, The Gem of Life

This veteran Chinese actress is from Hong Kong and, apart from acting, she’s also talented in singing. She had to enter the show business when her family got bankrupt at the age of 14.

Before acting, she first started as a singer and released many albums in Mandarin and Cantonese. It was with the film Happy Ghost II with which she started her career as an actress.

Guan Xiaotong, a singer and talented actress, was born in a family of actors who encouraged her to pursue a career in the arts. She also attended the Beijing Film Academy, where her performance was extraordinary.

Her career started when she was four and she got to act in the film Nuan. She is also a talented child actress who successfully worked in many projects and, thus, Chinese Media calls her Nation’s Daughter.

This beautiful singer and actress is another Chinese celebrity who is famous for her notable features. Her career began when she participated in Yahoo Search Star Game and was able to win the competition.

She then signed a contract with Huayi Brothers and made her debut with the series Golden Marriage. Her role in the Legend of Lu Zhen made her an instant hit not just in China but in South Korea and Japan.

Popular Movies/ Dramas: Sister, Adoring, One and Another Him, Inference Notes, A Love for Separation

Zhang Zifeng is one of most beautiful chinese actresses. She is one of the most famous and celebrated actresses of China who became recognized as a child actress. She is only 20 years old and has achieved immense success in her field.

She’s the youngest person who was able to win the Hundred Flowers Award and 22nd Huading Awards. She was also on the Forbes China Celebrity 100 list in 2019 and 2020.

This beautiful Chinese actress is one of the most sought-after celebrities in the Chinese industry. She made her acting debut with the movie King of Beggars and the series Tang Ming Huang.

But it was through the historical TV series Palace, that she got mainstream success. Here she played the part of an actress who time-traveled to the past.

Dilruba is an actress of Uyghur ancestry who is known for her gorgeous features. She debuted with the drama Anarhan in 2013. The series became popular and also got a nomination at the 30th Flying Apsaras Awards.

But it was through the drama Pretty Li Huizhen, which was a remake of the hit South Korean drama, She Was Pretty, that she got breakthrough success.

Popular Movies/ Dramas: Mojin: The Lost Legend, League of Gods, See You Tomorrow, General and I

Angelababy is one of the most beautiful Chinese actresses who is also a model and a singer. As her father was in the fashion industry, she became interested in fashion from a very young age.

When she was 14, she signed a contract with Style International Management and started her modeling career. It was with the movie Trivial Matters, with which she debuted as an actress and here she only had a cameo appearance.

This Chinese actress famous for her beauty and grace was born on September 13th, 1993. She completed her degree in Chinese folk dance from the prestigious Beijing Dance Academy.

While she was still a student, she got picked to play one of the central roles in the movie, Coming Home. The film went on to break many records, and Zhang herself was highly praised for her acting and dancing skills.

Popular Movies/ Dramas: Dynasty Warriors, The Game Changer, The Dance of the Storm, Fighter of the Destiny

She also got an award in modeling and took the title of “Most Photogenic” at the age of sixteen. In 2012, she made her acting debut with the series, Xuan-Yuan Sword: Scar of Sky.

Lin Yun is one of the most beautiful Chinese actresses of her time. She was born to a Porter father and a housewife mother.

When she was eighteen, she got her big break in the movie The mermaid and, it went on to become one of the highest-grossing films ever. With this movie, she became famous and from then on started acting in numerous successful films.

On that note, we conclude our list of Top 15 Most Beautiful Chinese Actresses Ranked (2023). We hope you like our picks and agree with the list. Stay tuned to read more entertaining articles on your favorite topics.