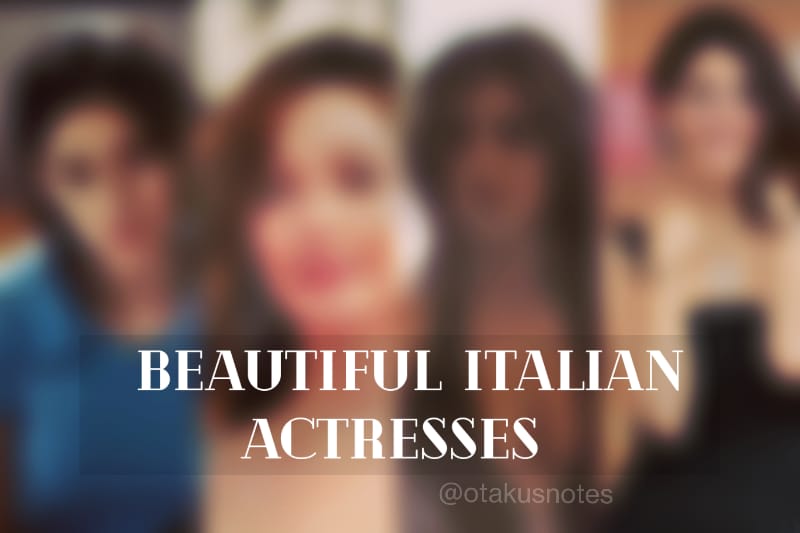 Everybody is aware of the beauty that Italian actors and actresses hold. They not only mesmerize us with their acting but also with their otherworldly features. So, to appreciate their charm, we list our version of the Top 10 Most Beautiful Italian Actresses Ranked (2023).

Beauty lies in the eyes of the beholder and, these actresses on our list are considered beautiful by the majority of their admirers. It is not just their appearance that we admire but also their talent and passion for what they do. Hence, we present our Top 10 Most Beautiful Italian Actresses Ranked (2023).

Ana is an Italian actress born in Romania to a classical ballet dancer mother. She graduated from the Centro Sperimentale di Cinematografia and started her acting career in the theatre.

She gained popularity when she acted in a series of television dramas and movies. Even though she has many accolades to her name, the most important one is her nomination for the Best Actress category at the David di Donatello Awards.

Another beautiful Italian Actresses on the list is Elena Santarelli. She is one of the most beautiful Italian actresses, models, and television personalities. She is also the niece of the famous Italian footballer Ubaldo Righetti.

She started her career with modeling and then made her television debut as the assistant of Amadeus in the quiz show L’eredità. As a host, she was also a part of Stadio Sprint, which is a sports program. Apart from that, she has also acted in many films and series.

Anna Safroncik is one of the most beautiful Italian actresses and models, born in Ukraine. She made her stage debut at the age of 4 and then moved to Italy at the age of 13.

In 1998 she won the contest for Miss Toscana and ranked in the eighth position at the Miss Italia competition. She made her debut with the film Welcome Albania in the year 2000.

This beautiful Italian actress was born in Rome, Italy, and graduated from the prestigious Centro Sperimentale di Cinematografia. Before becoming an actress, she dreamed of becoming a film critic, but her love for acting took over and, she had to let go of that dream.

It was with the film H2 Odio with which she debuted as an actress. One of her most celebrated works is the film Parlami d’amore for which she got nominated for the award of the Best Supporting Actress at the David di Donatello Awards.

This Italian actress is another beautiful woman who was born in Siena. She graduated from the prestigious Piccolo Teatro from the acting course of Giorgio Strehler, who selected her himself when she was 18.

She worked for many years in theatre but soon moved to Rome to start her acting career. It was with the movie After Midnight, with which she debuted.

This is another beautiful Italian actress who graduated from the University of Rome in communication sciences. Her first role was to act in a commercial for Maxibon Motta Ice cream, which gained immense popularity.

She debuted with the Italian series Amico mio when she was only 13. But, her debut in cinema happened with the movie Vacanze di Natale 95.

Elisabetta Canalis is an Italian actress and a showgirl, famous for her beautiful features. She was born in Sardinia to a radiologist father and a teacher mother.

Even though she got a chance to study foreign languages at the University of Milan, she couldn’t graduate because she had already started working as a dancer for the channel Canale 5. She made her debut with the series Deuce Bigalow: European Gigolo, where she had a cameo appearance.

Maria Grazia Cucinotta is another famous Italian actress who is regarded as one of the most beautiful women ever. She is not only just an actress, but also a film producer, model, and screenwriter.

Her acting career began with the movie Vacanze di Natale ’90 in 1990. In 2012 she received a star on the Italian Walk of Fame in Canada.

Murino is another Italian actress who is famous for her beauty and graceful acting. At first, she wanted to become a doctor, but then she competed in the Miss Italy contest, where she got 5th place.

She studied acting in Scuola di Cinema e Teatro, run by the actress Francesca De Sapio. Her acting career began with theatre, but after some time, she moved on to act in dramas and movies.

Let’s end the list of most beautiful Italian Actresses with everyone’s favorite, Monica Bellucci. She is undoubtedly one of the most famous and beautiful Italian actresses ever. She started her career as a model at the age of 13 and later modeled for brands like Dolce and Gabbana, Dior, etc.

Her acting career started with films like La Riffa and Dracula, where she had minor roles. But it was with the French film, The Apartment, with which she got widespread acclaim.

On that note, we end our list of Top 10 Most Beautiful Italian Actresses Ranked (2023). We hope this list was satisfactory to our readers and, we were able to include your favorite actresses here. Stay tuned for more articles that you will surely be interested in.