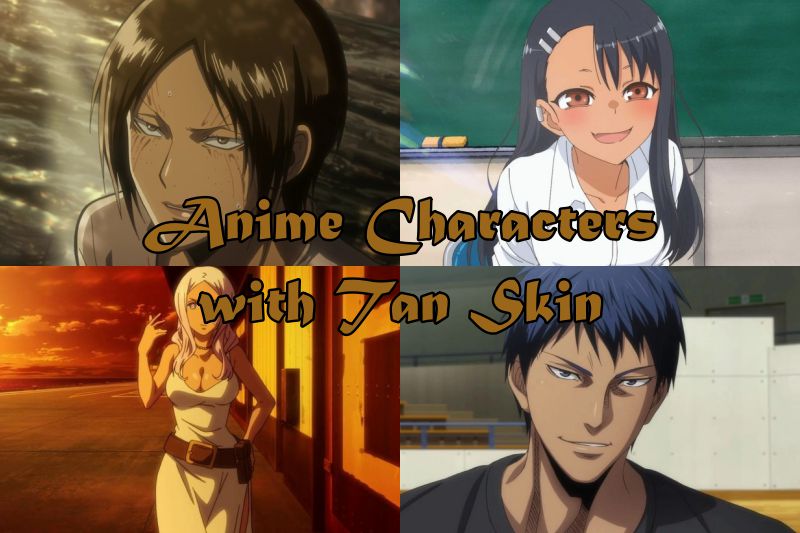 Though anime is originally from Japan, its characters are not limited to that geography. Anime characters can be found of various nationalities and ethnicities as well as of different races.

For this list, we’re taking 15 characters from different anime. Before you start reading further, let us issue a spoiler warning for some of the content there. Now that it’s out of the way, let’s see what the list of 15 anime characters with tan skin looks like. 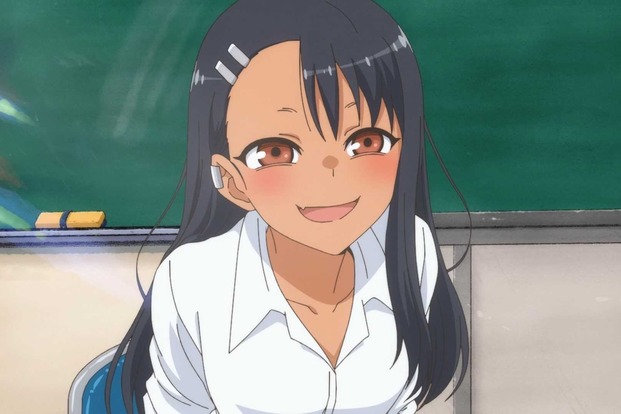 The very first on the anime characters with tan skin list is Hayase Nagatoro. She is a first-year student at Kazehaya High School, where she meets the meek and shy Senpai.

Nagatoro takes a shine to her upperman and regularly bullies and teases him. Despite her seemingly thoughtless actions, she actually cares for him and even develops feelings.

Nagatoro is an outgoing and athletic girl. She is of average height and has a strong and sporty figure. Her hair is long and black, and her eyes are brown. Because of her outdoorsy hobbies, her skin has tanned to olive. 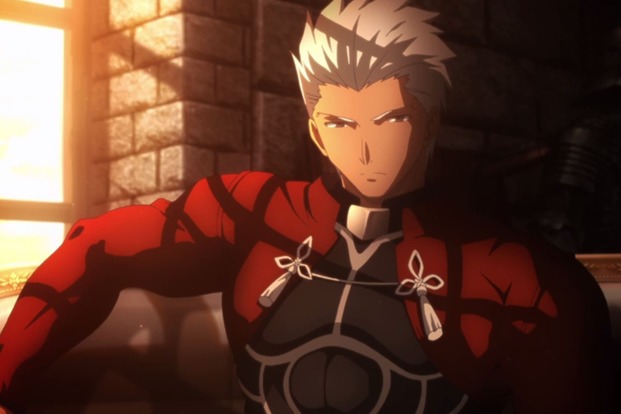 Archer is the Archer-class servant who serves Rin Tohsaka during the Fifth Holy Grail War. Archer’s true identity is EMIYA. Unlike the other servants, he’s not a proper Heroic Spirit.

Instead, he’s actually Shirou Emiya, who becomes a Heroic Spirit after coming into contact with the World or Alaya, vowing to protect the world as a Counter Guardian.

Archer’s appearance differs vastly from his true identity. As a Heroic Spirit, he appears as an adult. He has swept up white hair instead of Shirou’s reddish brown. Archer is tall and muscular and has tanned skin, a trait he doesn’t share with Shirou. 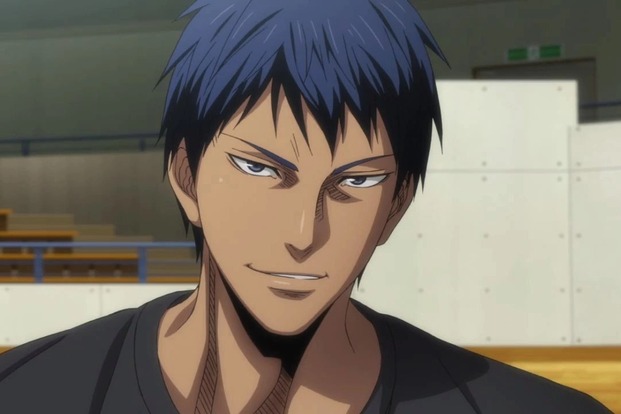 Daiki Aomine is the ace and power forward of the Touou High School basketball team. He previously played for Teiko Junior High and is one of the Generations of Miracles.

He was Kuroko’s partner and the light of their light-shadow combination to Kuroko’s shadow. He’s an exceptionally good player who becomes a rival of Kagami.

Being a basketball player, Aomine is very tall. His height reaches up to 6’3.5”. He is tan-skinned and has short blue hair with blue-grey eyes. 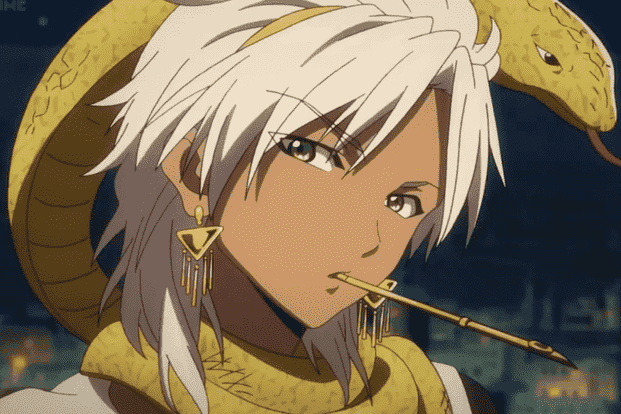 Anime: Magi: The Labyrinth of Magic

Shintus Carmen is a friend and roommate of Aladdin who goes to the Magnostadt Academy. He is also the heir of a poor noble family in the Heliohapt Kingdom. Sphintus is originally from the 4th Kodor with average magic, but he works his way up to the 1st Kodor. He specializes in healing magic.

Sphintus is a handsome and tan-skinned young man with white hair and green eyes. He always wears his pet cobra, Kukulcan, around his neck. 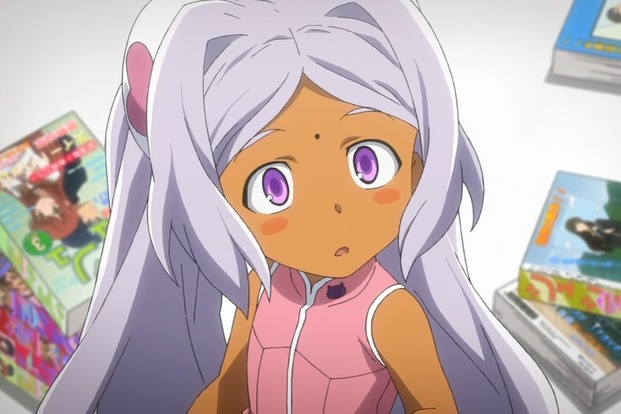 Muru Muru, or Mur Mur is the servant of Deus ex Machina, the God of Time and Space. Her main task is helping Deus oversee and judge the Survival Game. She appears comical and harmless, but her true self is revealed towards the end. She’s a major antagonist of the series.

Muru Muru looks like a little girl, but her personality is dark and twisted. She is tanned brown and has long, pale lavender hair. Her eyes are big and purple, with a black dot between her lavender eyebrows. 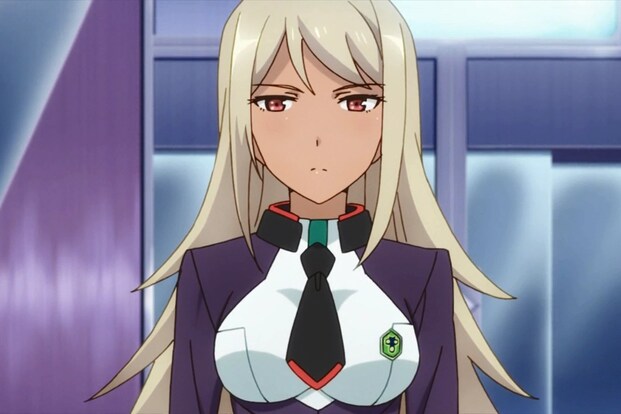 Camilla Pareto is a student at the Arlequint Academy and the leader of the Ferrovius (Lion’s Faction). She is researching combat and has developed two puppets with her fellow researcher, Ernesta. Camilla lost her arm and leg in the war, and her lost parts are replaced by Ernesta’s puppet technology.

Camilla is a serious-looking teenager. She has long, sandy-blonde hair and reddish-brown eyes. Her skin is tanned, complementing well with her light-colored hair. 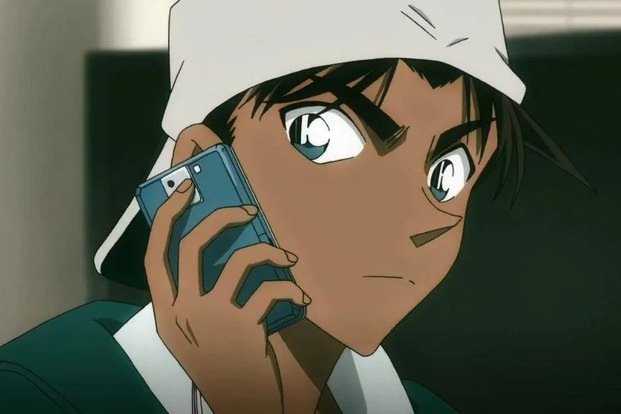 The seventh entry on the anime characters with tan skin list is Heiji Hattori. Heiji is a high school detective like Shinichi. He’s from Osaka and talks in Kansai dialect. Heiji is a rival to Shinichi but helps the guy protect his masquerade as Conan after learning his situation.

Heiji is a brilliant guy and has the looks to go along with his sharp intellect. He is tall and tan, and has bluish green eyes. He’s almost always seen with his childhood friend, Kazuha. 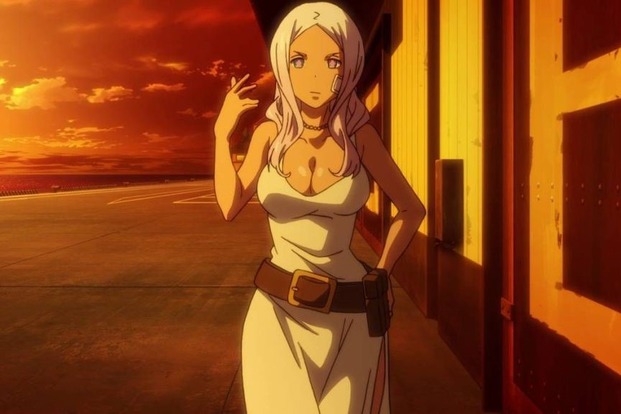 Hibana is the Captain of the Special Fire Force Company 5. She’s a Third Generation pyrokinetic and a scientist, as well as one of the only two surviving nuns, alongside Iris. Her pyrokinetic ability, Clematis, allows her to create flower-shaped flames through her hands or a fan.

Hibana is a gorgeous 20-years, old woman. She has tanned skin and a curvaceous figure. Her hair is a very pale pink, and her eyes are blue with pink, flower-shaped pupils. 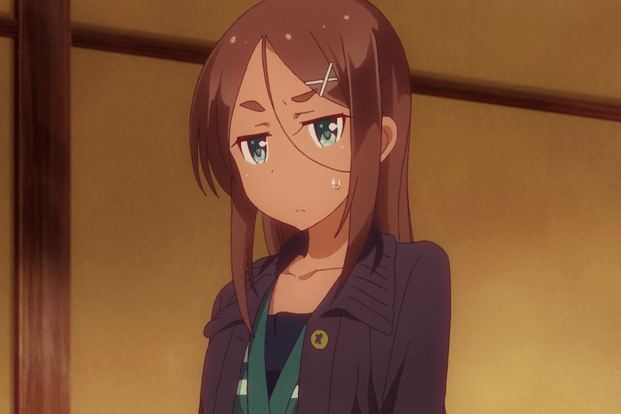 Umiko Ahagon is the chief programmer at the game company, Eagle Jump. She is a strict professional and doesn’t like fixing others’ mistakes. Umiko is a fan of the military and keeps airsoft guns at her office. She also particularly dislikes her surname.

Umiko is a beautiful young woman in her mid 20s. She is tanned and has long brown hair. Her eyes are blue, with short and thick, brown eyebrows. 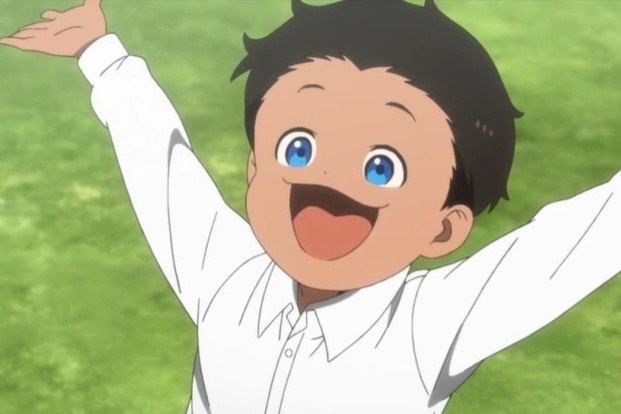 Phil is an orphan child living at the Grace Field House along with the other orphan children, not knowing the cruel situation they are in. Phil is only 4-years old and is thus considered to be a low-grade food. But he’s still one of the smartest, as well as one of the highest scorers.

Phil is a sweet and adorable child. He has a childlike round, chubby face with tanned skin. His hair is dark brown and his eyes are bright blue. Prior to knowing their predicament, Phil is always smiling. 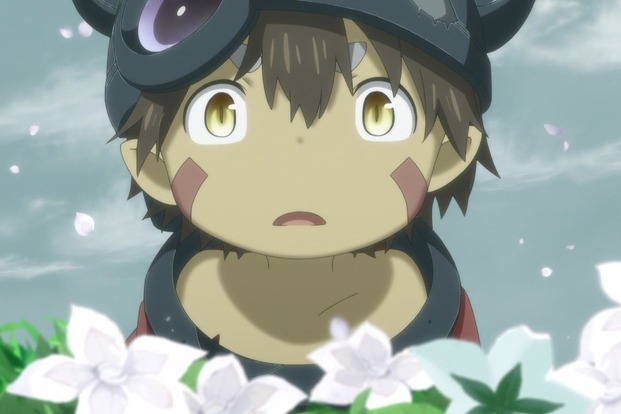 Anime: Made in Abyss

Reg is a robot who has amnesia and is found by Riko in the first layer of the Abyss. Riko names him Reg after the dog she had in the past. Because of his artificial body, the Curse of the Abyss doesn’t affect him. This leads to people dubbing him as “The Treasure of the Deep”.

Despite being a robot, Reg’s appearance is that of a little boy. He has golden eyes and brown hair, covered by a mystical helmet. His skin is tanned and he has two symmetrical red markings on each side of his chin. 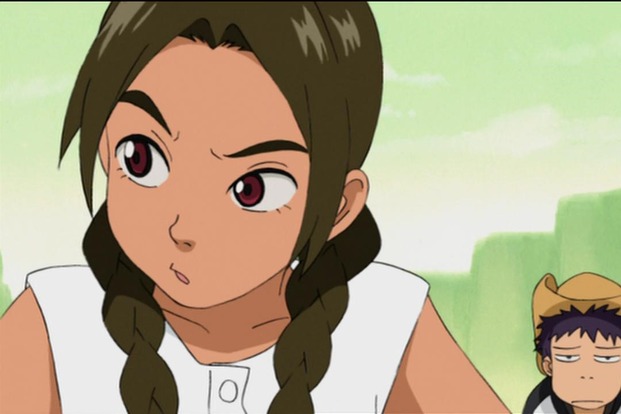 Arumi is a sweet, 12-years old girl. She has tan skin, with brown hair styled in two braids. She also has reddish brown eyes with thick eyebrows. 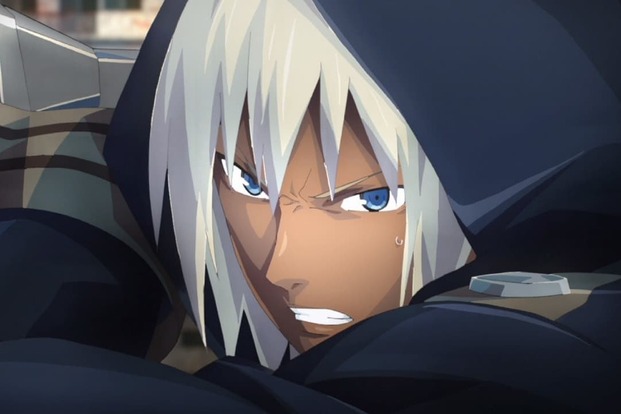 Here at number 13 on the list of anime characters with tan skin, we have Soma Schicksal. Soma is a veteran of the group, God Eater. He uses a Buster Blade as his God Arc. Soma has reserved nature and doesn’t interact much with people around him. His survival rate is very high due to his fast regeneration.

Soma is an 18-years old teenager. He’s tall and tanned, and has platinum blond hair with blue eyes. Soma’s brown skin comes from his German, caucasian father and Indian mother. 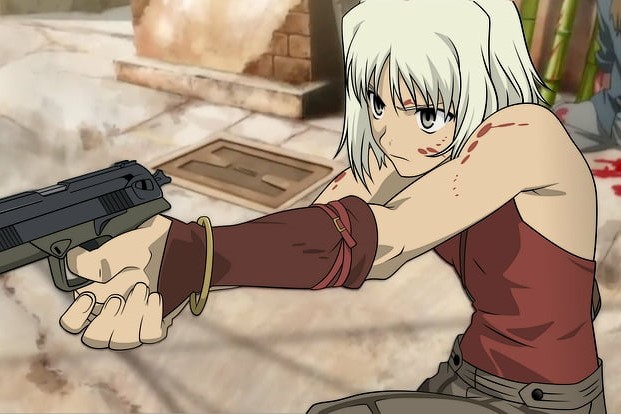 Canaan is a mercenary working in Shanghai. A war in the Middle East destroyed her village, leaving her as the sole survivor. She was saved by an ex-mercenary, Siam, who trained her and gave her the name Canaan. She’s currently looking to extract revenge from Alphard Al Sheya for betraying Siam.

Canaan is a young woman with a slender and muscular build. She has tan skin, along with platinum blonde hair and gray eyes. The light-colored hair contrasts her darker skin beautifully. 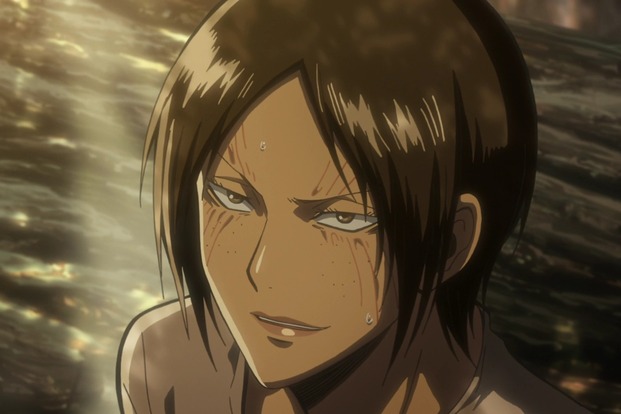 Ymir is a fellow trainee of Eren in the 104th Training Corps. After graduating, she joins the Survey Corps along with Krista. Ymir is the Jaw Titan and originally belongs to Marley, thus knowing the truth about Titans and the world beyond the walls.

Ymir is actually several years old. But spending many years of them as a Mindless Titan had stopped her aging. She currently looks like a teenager with severe features. She has tan skin with freckles under the cheeks on her face.

The number of anime characters with tan skin is decidedly less than those with fair skin, but here are those who know how to rock a tan look. The list above has both minor and major characters, but they are all special and beautiful in their own way.

We’ll conclude here. If you liked this list, don’t forget to check our other exciting lists on anime and manga.