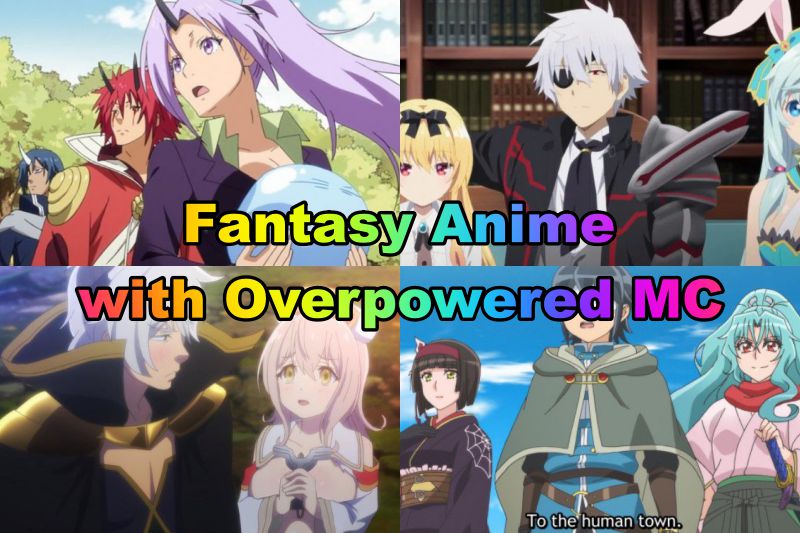 We often wonder if we can escape from reality to a full fantasy world and magic and awe. A world that makes the impossible possible has anything we can imagine, and features a life that is full of fun and frolic.

Fantasy animes help us live out this dream, showing us the world we aspire for through a hero’s journey. But a simple hero won’t be as much fun as an MC who can defeat an enemy just by flicking their finger.

The anime world is littered with the same theme as a fantasy world. But don’t worry, this article will give you the 15 best fantasy anime with overpowered MC.

15) Problem Children Are Coming from Another World, Aren’t They? 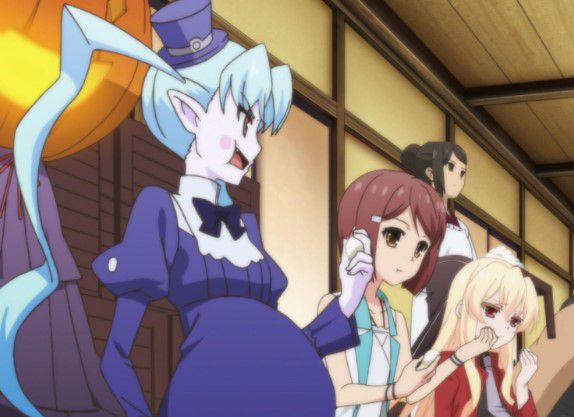 What would you do I you had infinite power but lived in a world that was too boring to use it? Problem Children Are Coming from Another World, Aren’t They? Follows the lives of Asuka Kudou, You Kasukabe, and Izayoi Sakamaki, who had immense psychic powers but boring lives.

One day they received a mysterious envelope inviting them to an unknown place called Little Garden. Suddenly transported to this new world, our trio meets Kurousagi, who informs them that they’ve been given a unique opportunity to participate in a game using their abilities.

The group is asked to join a community called no name and embark on a journey to protect its citizens and defeat the demon lord.

14) How Not to Summon a Demon Lord 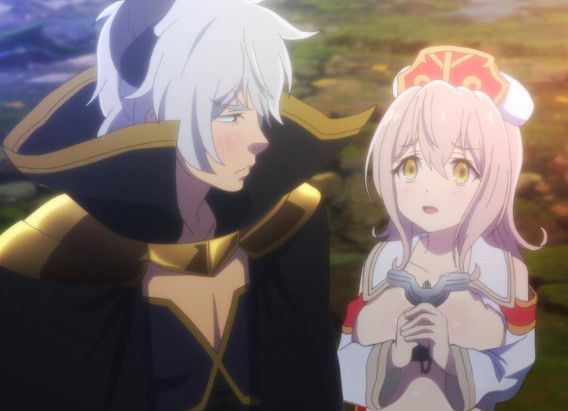 Takuma is suddenly summoned into a world like Cross Reverie by Shera L. Greenwood and Rem Galeu. How does our shut-in NEET with no experience of talking to women react to being greeted by a busty elf and a pantherian girl? He dons his demon lord persona to mask his crippling anxiety.

The trio now embarks on a journey to find a way to undo this uncanny situation of the summoners becoming slaves.

13) Arifureta: From Commonplace to World’s Strongest 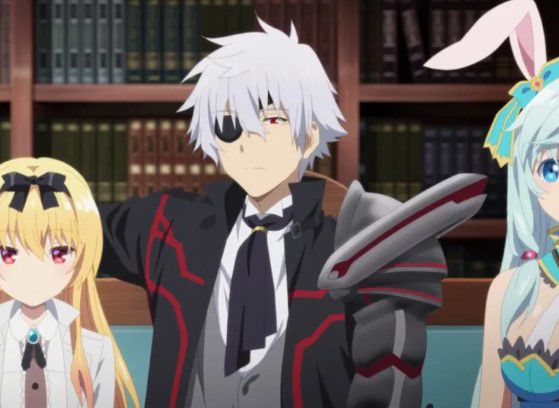 After Nagumo Hajime and his class are mysteriously summoned to a fantasy world and tasked with the job of saving humanity. Hajime finds himself as a weak character with a transmutation skill. His life gets turned upside down again as he’s betrayed by one of his classmates and falls to the bottom of the abyss.

Hajime tries his best to survive the unforgiving dungeon and meets Yue, who takes an interest in him and decides to help him return to the upper world. 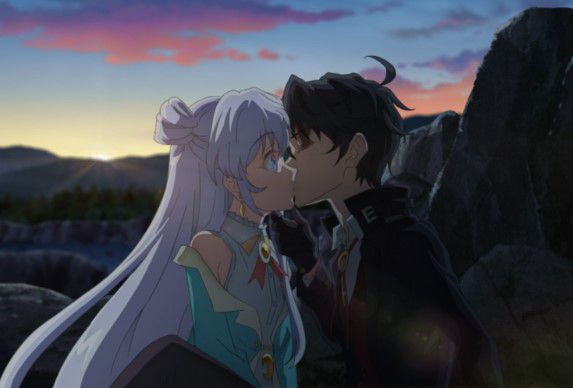 Reincarnation is a common theme when it comes to fantasy animes. The world’s greatest assassin gets betrayed by his organization and dies frustrated with his incomplete life. A goddess interested in his skills offers him a chance at reincarnation.

Accepting this invitation, he finds himself reincarnated as Lugh Tuatha Dé in a noble family that serves as the assassins for the Alvan Kingdom. Tasked with the mission to prevent the world’s destruction by its hero Lugh attempts to polish his newly gained skills.

11) The Misfit of Demon King Academy 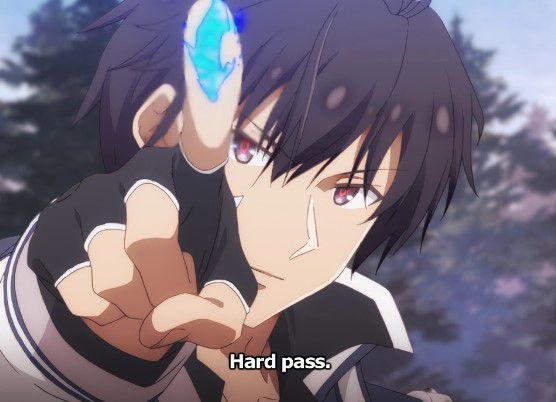 Humans and Demons have been at war against each other for eons. Seeing no end to this war, the demon king Anos Voldigold sacrifices his life and creates barriers between the worlds.

Anos reincarnates himself after two millenniums in hopes of returning to a peaceful world. He enters the Demon King Academy to announce his return. But finds something different; no one remembers the true name of the Demon Lord.

Anos decides to investigate this change in his people’s history and unmask the imposter who wrongly claims his title. 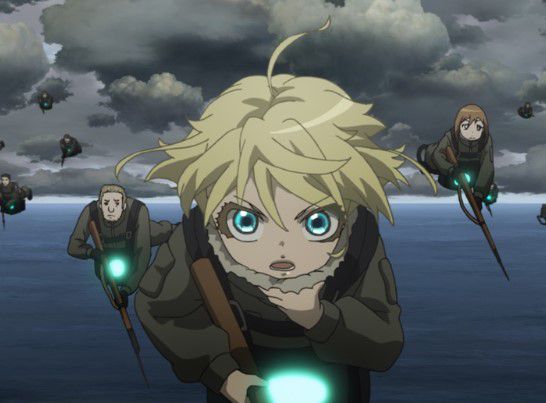 A fantasy anime with an overpowered MC usually has a male character as its MC. Youjo Senki takes a departure from this usual trend and covers the story of a female MC.

Tanya Degurechaff is one of the most feared imperial armies. In reality, she is the reincarnation of a man who challenged a god who calls himself X. After challenging X, he finds himself reincarnated in an alternate world that has been at war as a girl.

Known for her ruthless, cold-hearted demeanor and high tactical aptitude, she rises through the military ranks to defeat X. 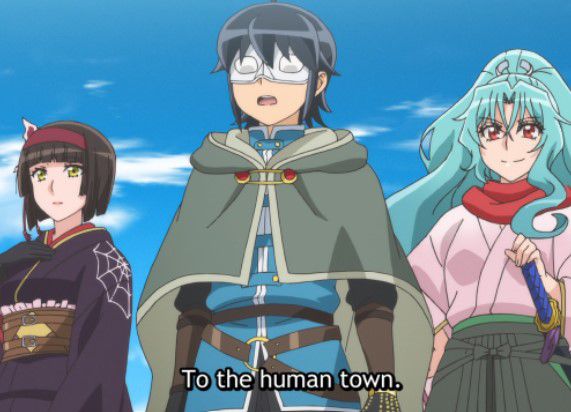 Makoto Misumi was a normal human being till he was contacted by a god from another world. It was here he found out that his parents had been other worlders who were transported to Earth.

But when he reaches the Goddess o the other world, she declares him ugly and revokes his hero status. She goes far enough to curse him such that he can’t communicate with humans but understand all other languages. He is plunged into the farthest corner of the world, unprotected and rejected. 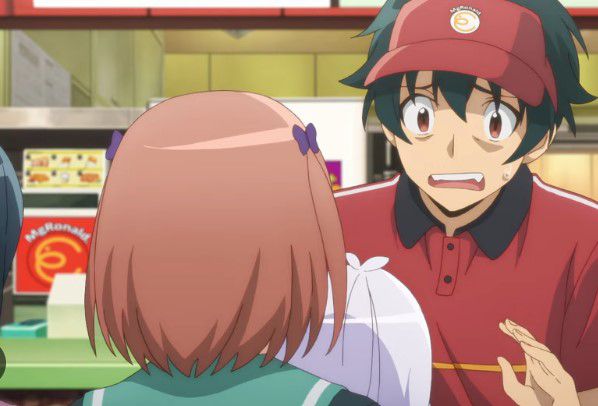 Fantasy animes with overpowered MCs usually follow the story of the Hero’s in their bid to defeat the demon lord. The Devil Is a Part-Timer! departs from this approach.

Satan, in his bid to conquer the world, battles with hero Emilia but ends up retreating through a dimensional portal. Unbeknownst to him, he lands on Earth. He finds himself stranded in modern-time Tokyo with his trusted aid Alsiel.

Losing his ability to use magic, he adopts the identity of Sadao Maou and begins working at MgRonald’s. He starts living as a normal human doing chores, struggling to pay rent, and soon forgetting his objective of going back. 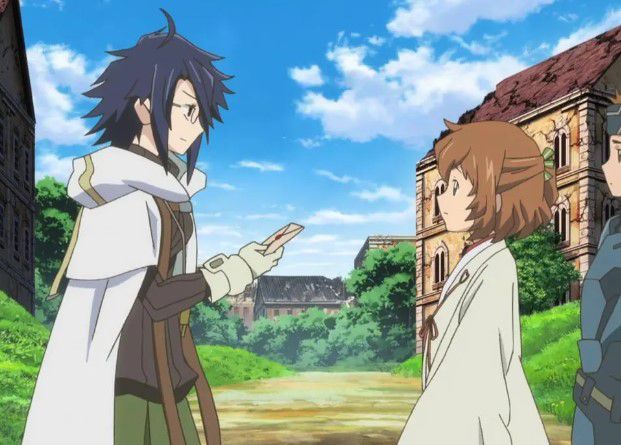 Haven’t we all wished we could live in our favorite games? Log Horizon helps us live that fantasy through its characters. Log Horizon differs from other animes within its theme by not being a death game like Sword art online.

Shiroe, along with 30,000 other Japanese users, finds himself transported to MMORPG Elder Tale. They must learn to live in this new world without their usual commands and negotiate with NPCs who have come alive.

Shiroe, who was the strategist for Debauchery Tea Party, must bring stability to this chaotic world with his newfound allies. 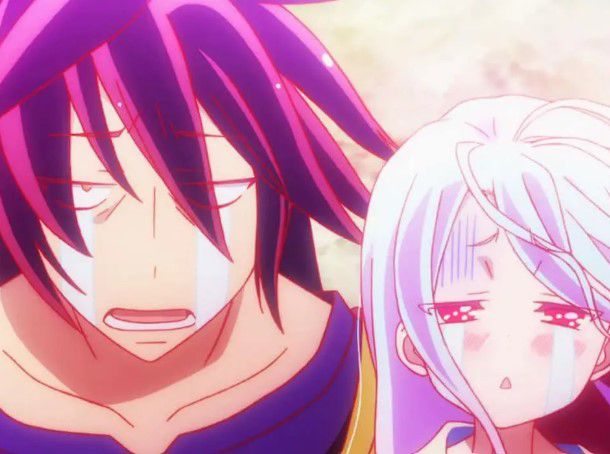 What if games could decide everything in our lives, make decisions, solve disputes or maybe conquer the world? No Game No Life delves deep into this theme.

Step-siblings Sora and Shiro were the best gamers who stood at the top of their gaming communities. They respond to a game from an unknown user and get transported to Disboard. Disboard is a world occupied by 16 races and administered by the user who invited them, Tet.

Tet is the one true God of the world who sends them to Elkia. Both the siblings decide to help the kingdom grow and challenge Tet once again. 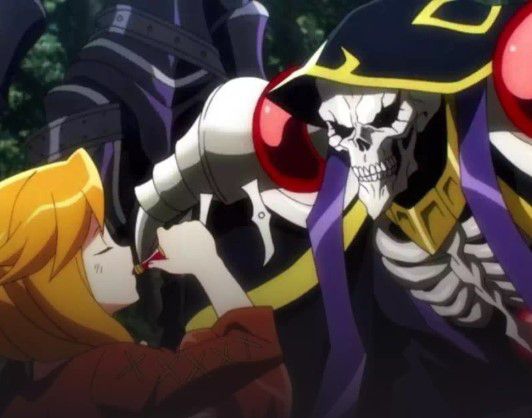 Momonga is an avid supporter of the VR game called Yggdrasil; using this in-game identity, he decides to stay in his guild till the servers shut down at midnight.

But to his surprise, he finds himself fully conscious in his avatar and the server still running. But there’s a twist he can’t log out, and all the NPCs have somehow come alive. Perplexed by this unique situation, he decides to explore the current changes in the world he must reside in.

He soon decides to establish himself as Ainz Ooal Gown, an undead Lich, in an attempt to find his former comrades who might have been transported as well. 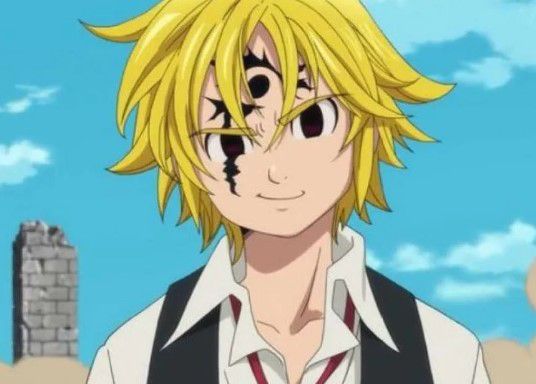 Nanatsu no Taizai became one of the most successful animes of its year. However, its journey has been a bit bumpy, being criticized for the bad animation of its later seasons.

The Seven Deadly Sins were the most celebrated Holy Knights of Britannia. But they soon got labeled as traitors when they got framed for the murder of the chief holy knight. This accusation caused them to disperse and become words of legends.

Elizabeth decides to look for these legendary figures to protect her kingdom from a coup against her father. Only to soon discover Melodias, who decides to help her reassemble the group.

3) The Rising of the Shield Hero 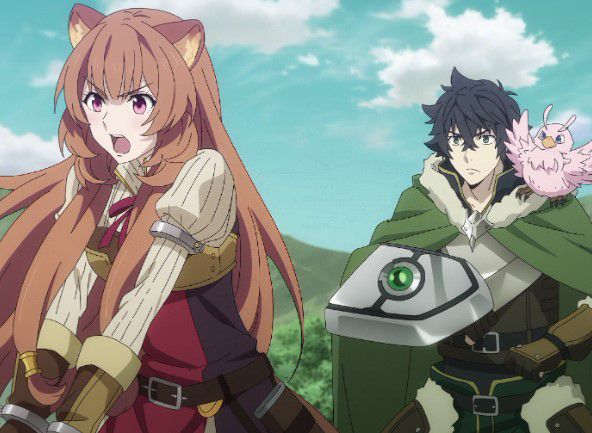 As we move into the top 3 of our list of Best Fantasy Anime with Overpowered MC. We will come across animes that take a unique approach to the genre.

The Rising of the Shield Hero depicts the life of Naofumi Iwatani, who gets summoned to Melromarc as one of the four cardinal heroes. These heroes must protect the world from waves of catastrophe.

Naofumi, as the shield hero, gets betrayed by the princess of the kingdom and is marked a criminal. He must avenge his lost image and find a way to survive in this new world.

2) That Time I Got Reincarnated as a Slime 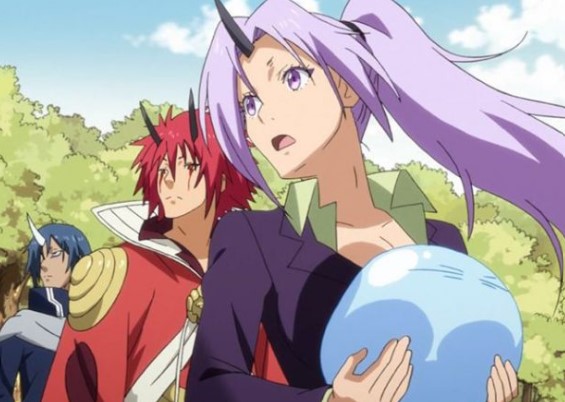 Tensei shitara Slime Datta Ken is unique in its take on the fantasy genre. At the same time, reincarnation is a common theme within the theme; reincarnated as a slime shifts perspectives by following the renewed life as a monster.

Satoru Mikami suddenly finds himself stabbed while returning from work. Filled with regret, he finds himself in a peculiar situation. Satoru gets reincarnated as a slime, the weakest monster in a fantasy world.

He soon learns to live in this new world after befriending the storm dragon Veldora. 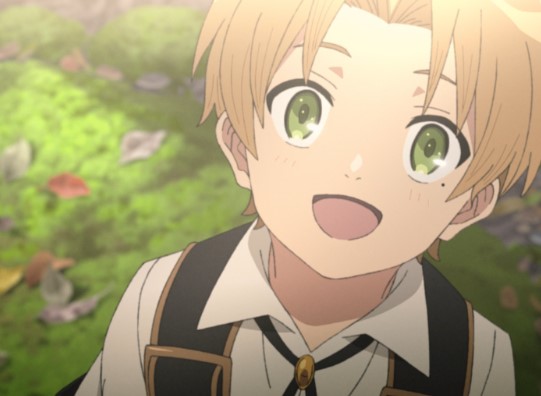 Mushoku Tensei: Isekai Ittara Honki Dasu was one of the most anticipated and successful animes of 2021. This anime adaptation follows the life of Rudeus Greyrat, who gets reincarnated into a fantasy world.

Using his memories and knowledge of his previous life, he begins to master magic and combat, proving to become a genius. What does this new world hold? Fame, Love, adventure?

Live your fantasies through our list of the top 15 list of best fantasy anime with overpowered MC. Let’s get transported to an alternate realm to experience these otherworldly stories.