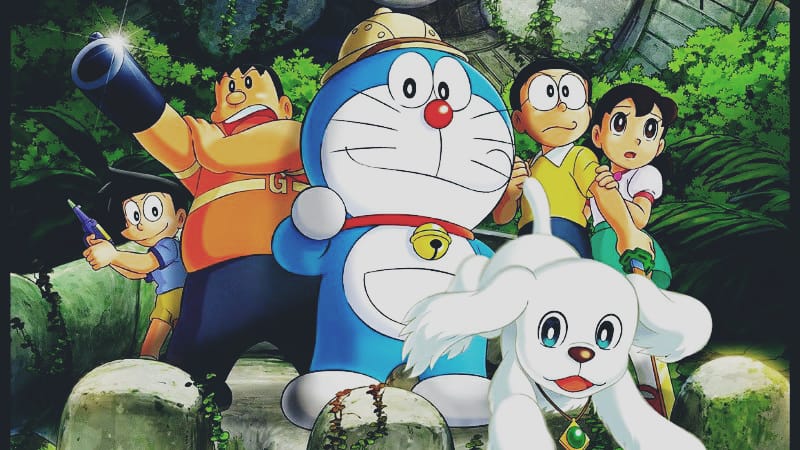 Doraemon, the Japanese Manga series illustrated and written by Fujiko Fujio, was first published in 1970, and since then, it has become one of the most loved animation series. Doraemon is the one such series that almost every person would have seen in his/her childhood. It’s not only a series; it also teaches us many things related to daily life.

Doraemon series also earned the title of the nation’s first “Anime Ambassador” in March 2008. Also, it became one of the best-selling manga for children all around the world in 2015.

The plot revolves around Nobita Nobi, a young depressed boy who is poor in schooling and doesn’t have any friends. To help him, Doraemon, a cat robot, is sent to him from the future through time travel by Nobita’s grandson, Sewashi Nobi, and after that, his life changed.

Doraemon has a four-dimensional pocket from which he can summon any unexpected future gadgets to help his friend Nobita from daily life challenges. Not only support, but he also teaches him in the right direction and how to solve the problem on his own. This is the best part of the Doraemon series, and this is why it is the most-lovable series among children.

This post will discuss the list of all movies in Doraemon from the beginning to the latest. Every movie teaches something different, like the History of Japan, the world’s reality, the creation of the Universe, etc. We highly recommend you guys to watch the movies according to the increasing release date. So, let’s begin;

This movie teaches about the Late Cretaceous period, which was 100 million years ago.

The story is about the connection between different dimensions and universes.

The movie combines mysterious events and the time machine story.

The plot of this movie mainly focuses on the Bermuda Triangle and the Atlantic Ocean.

The story is based on the parallel world’s journey where magic exists.

The adventurous story revolves around the alien and the battle in the different universe.

The science-fiction movie comprises the adventure to the North Pole.

In the movie, Doraemon explains the extinction of the dinosaurs and other planktons.

The adventurous movie shows the journey to the West, where Doraemon is the traveler from the Western Dynasty.

This is one of the best movies which comprises the history of Japan.

The movie has shown the environment of Animal Planet where all animals can speak.

This movie teaches the history of Iraq and the 5th Abbasid Caliph, Harun Al Rashid.

In the movie, Doraemon solidifies the kingdom of clouds with the help of robots.

The adventurous movie is based on the hotel vacation at Hotel Burikin.

The dream story with inspiration from The Three Musketeers where Nobita dreams of the fantasy world.

It is another best movie that teaches the creation of the Earth.

The 22nd-century story where Doraemon and his friends experience different planets in the Galactic Express Train.

The story of another adventure on a habitable and lush planet.

The Pirate life story where Nobita and his friends go on the South Seas journey for the treasure.

The movie is based on a game where Nobita and his friends are having a Spaceship race.

The story teaches about the Mesoamerican Kingdom, called Mayana.

The story of another planet where Doraemon and his friends will meet futuristic robots.

The story of the Ancient wizards where Doraemon and his friends wander the Storm Village.

An unexpected story of a mysterious dog who entered the Time Machine and an accident happens.

Another dinosaur-based movie that shares the knowledge of its history.

The story of the Blackhole and how it will destroy the earth and its inhabitants.

This movie is also one of my favorites because it teaches the importance of plants and always takes care of them.

Same as The Records of Nobita, a Spaceblazer movie.

The story on the legend of Mermaids.

The story revolves around the giant RC robots.

Another favorite movie, which unveils the knowledge of extinct animals.

The adventure story inside Doraemon’s pocket.

The mysterious story of Africa, where Doraemon and his friends solve a mystery.

Another space adventure story in which Doraemon and his friends save a different planet.

This movie also shows the history of Japan about 70,000 years ago.

Nobita and his friends are on a great adventure and learn about Antarctic history.

The adventurous pirate movie in which Doraemon and his friends are on the treasure hunt.

As referred by the title, here Nobita and his friends explore Moon to solve a mystery.

Another story related to the dinosaur and their extinctions. But this time, Nobita meets new species of dinosaurs.

This movie is the remake of a previous movie, “Nobita’s Little Star Wars.”

Where to Watch All Doraemon Movies-

Fans can watch all Doraemon movies from the Dailymotion website with English subtitles. It is challenging to get the source of every movie list because it is a Japanese TV show. But this website has a collection of maximum Doraemon movie (in Hindi dubbed also) along with the episodes. Fans can also watch Doraemon movies on YouTube. We will be back with another movie list. Till then, stay tuned with us.