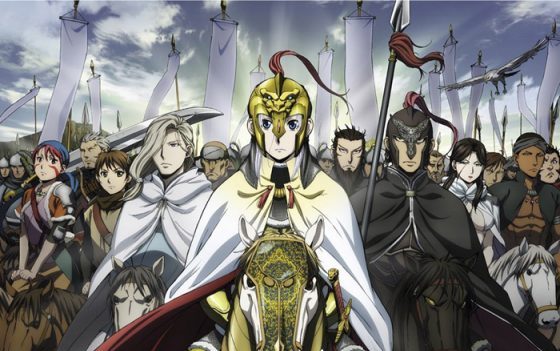 The setting of a historical anime takes place at some point in Earth’s past. The level of dedication to portraying the lifestyles, societies, and technologies of past periods and peoples accurately or believably can vary greatly between different works. Anyway, some of the most popular of these have also cringed the past and altered it to make it more fun.

Nonetheless, this genre has always pleased the viewers and the otaku community. On that note, here we are presenting to you the list of top 10 historical fantasy anime shows of all time. Read further for the whole list.

A powerful and young witch with her two familiars is disrupting the brutal war between the two nations in medieval France. Soon, the heavens intervene, and the archangels disapprove of her stance. Thus, her peacemaking starts to crumble as she fights against it.

The Montague family slaughters the Capulet family and takes over their kingdom. Capulet princess is spared in the onslaught and, after 14 years, falls in true mutual love with the Montague prince. Two lovers fighting against the stars and fate, gradually unraveling more truths.

A strong empire gets betrayed by a trusted minister, endangering the last surviving royal prince. Now he roams other countries in search of allies to take back his rightful empire, at the same fighting other opponent kingdoms and the minister, now the new emperor as the last boss.

In the 1600s, a soldier died in their rearguard and waked up in an isekai, full of already dead warriors, but alive here. There he teams up with legendary emperors like Oda Nobuna and unravels the secrets of this world and the bad guys ruling it.

Little magicians jump into grand adventures of roaming the wild to discover the legendary dungeons. On clearing them, the winner gets Dijjin, a familiar which helps them to one day gain the power to become the ruler of the world itself.

A bamboo cutter finds a small baby in a bamboo shoot. He soon finds enormous gold and takes it up as the baby, Kaguya’s fortune, and makes her a princess of a huge mansion. A seemingly jolly story turns sad and emotional as Kaguya’s real origin comes to light.

An interviewer and his cameraman cover a retired but successful actress as she describes her childhood struggle and path to fame. A significant person reveals her unexpectedly ordinary story. A tale inside a tale as we go in her flashback, as a poor and simple village girl.

A Medicine Seller roams feudal Japan in search of unworldly apparitions names Mononoke. His way of exorcising involves intensive inspection and analysis of the Mononoke to be slain. Soon, the situation riles up as stronger breeds pop up, endangering more people.

A boy lives in a remote mountain with his lovely family, with no father. A demon destroys his whole family in his absence and converts his sister into a demon too. With his mother and 5 siblings dead, he seeks unordinary power to defeat the demon and revert his sister back to a human.

Mushi is a basic form of life in the world of apparitions, present everywhere and nowhere at the same time. Some are deadly, and most are friendly, as they have many uses and benefits. A Mushishi is an expert who deals with all types of Mushi to save, help, and enlighten people.

These are the top 10 historical fantasy anime shows of all time with splendid and authentic stories from old books and literature. Do watch them from trusted sources only and experience a series of spectacular stories and animation with equally excellent fights and action.

Subscribe to our website for more charts and lists of the most popular genres in the otaku community. We will be back soon with more interesting anime titles for you. Until then, stay tuned, stay hyped.