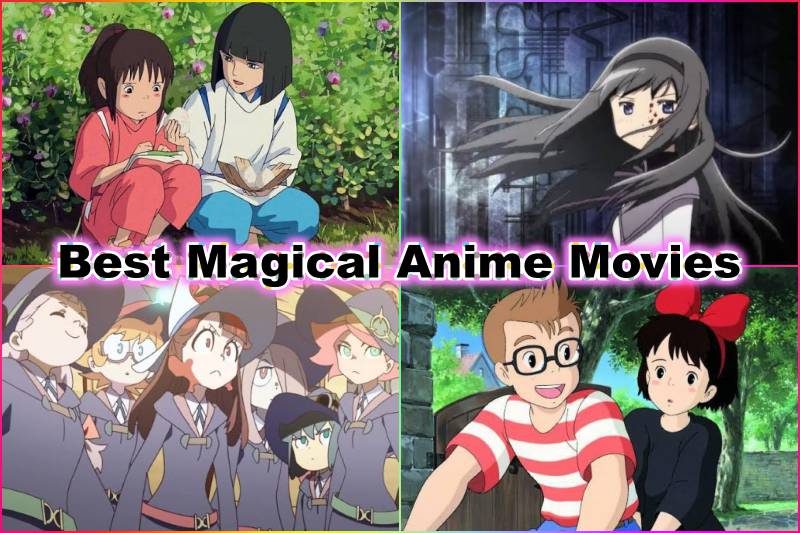 Magical anime is one of the most popular genres and has brought us plenty of great series. However, most fans do not have enough time to watch an entire series and still want to watch Magic. Then don’t worry; we have prepared a fantastic list of the 15 best magical anime movies that will blow your mind.

Even though anime movies are not as long as series, they excellently depict magic alongside great visuals. So without any delay, let’s get straight to the list.

Brave Story is set in a world that is connected to a strange world through an old building near a school. Wataru Mitani and Mitsuru Ashikawa attend the school and hear a rumor of ghosts in the nearest old building.

One day, Wataru saw a man entering the building, and he followed him to the end and stumbled into another world. He is unaware of the truth behind this building: that it is connected to a strange world and opens only once every 10 years.

Now, it is very thrilling to explore his journey in this strange world filled with mysterious things.

Princess Arete depicts a wonderful story about a princess named Arete who lived a boring life in a castle. She always wanted to see the outside world and also try to escape from the castle. However, she is caught by soldiers and forced to live inside the castle.

In the meantime, she reads several magical books about witches and wizards. Boax, a sorcerer, comes to her castle one day and proposes to her.

The King is ready to marry her daughter to a powerful sorcerer, and now Arete is ready for the first time to go outside the castle. You should watch this magical movie once and experience Arete’s wonderful story filled with magic and sorcery.

Magical Sisters Yoyo & Nene depicts the story of two sisters, Yoyo and Nene, who are experts at using magic. The series is set in a fantasy world where everything goes well until a huge tree appears from another world.

While investigating the tree, Yoyo suddenly went to another world. In another world, she finds that adults are slowly turning into monsters. Now it’s very interesting to see how she dealt with these issues and whether she was successful in returning to her world.

A Whisker Away is one of the most popular modern magical anime movies that was released in 2020. It does not depict magic to the extent that other magical anime films do. However, it beautifully uses magic alongside its wonderful love story.

It depicts the story of Miyo Sasaki, a young girl who is not very happy in her life. She also keeps being rejected by her crush and feels very low until she gets a mysterious mask.

She transforms into a cat by wearing this mask and spends her time with her crush. Its cute romantic elements and little magical elements make it a perfect pick for you.

11. The Irregular at Magic High School: The Movie – The Girl Who calls the Stars

The Irregular at Magic High School: The Movie-The Girl Who Calls the Stars is one of the great magical anime movies. It excellently depicts the story of two siblings, Tatsuya and Miyuki Shiba, who enroll at First High Magic High School.

They try to live normal lives while concealing their ties to the infamous Yotsuba clan. However, their skills and intelligence make them quite unusual for a normal high school student.

Now it is very interesting to explore how they keep their identity hidden and enjoy their school life. Its excellent magical skills and wonderful visuals make it one of the best choices for you.

10. Mary and the Witch’s Flower

Mary and the Witch’s Flower is one of the best magical anime movies. It brilliantly depicts the story of Mary Smith, a young and adorable girl. One day, she discovers a mysterious flower called “Fly-by-Night.”

This flower has the potential to grant her the ability to transform into a witch for only one night. If you’re looking for a cute, magical family anime movie to watch with your family or kids, then this is the ideal choice for you.

Big Fish & Begonia is a Chinese animated epic fantasy film, and it is also one of the best Chinese magical anime movies. It depicts the journey of a 16-year-old Chun girl who embarks on a fantastical and scary adventure.

Her journey began when she transformed into a red dolphin. During her journey, she meets a boy who gives up his life to save her. She then uses magic to bring him back to life, but this power comes at a high cost. This movie is truly heartfelt and really worth watching.

Okko’s Inn is a movie adaptation of a very popular children’s novel of the same name. This film began with a family tragedy in which both parents died, leaving a child with no memories.

As a result, Okko, a grade schooler, begins living with her grandmother at a rural ryokan that welcomes all kinds of visitors. But she soon discovers that the inn also has invisible residents.

Children Who Chase Lost Voices is a film by Makoto Shinkai, who has given us many blockbusters. So there is no doubt why you should watch this movie.

It demonstrates the story of a girl who spends her lonely days listening to the strange music coming from the crystal radio her father gave her as a keepsake. But one day, she sets out on an adventurous quest to reunite with the boy.

That’s how she learns about loss and the world’s cruelty and beauty.

In this movie, six witch girls (Akko, Lotte, and Sucy, Amanda O’Neill, Constanze, and Jasminka) are preparing for the upcoming school’s annual witch parade. If they can’t make this event successful, then they will be expelled from the school.

It became a great choice for you in terms of exploring magic because it is a movie from a popular magical anime.

5. The Secret World of Arrietty

The Secret World of Arrietty depicts a fantasy world where a tiny family lives whose members are just a few centimeters tall. They continued to live within the walls and floors of a typical household, concealing their identity from ordinary humans.

One day, Kamiki, a human boy, saw Shida, a member of a tiny family, and became very shocked by their presence. After that, the movie became highly engaging and depicted several hilarious incidents that kept you glued to the end.

If you are looking for a light-hearted magical movie with an incredible story, then you should watch this movie.

Kiki’s Delivery Service is a fun and easy-going magical anime movie created by Hayao Miyazaki. It depicts the story of Kiki, a young girl who is highly skilled at using several kinds of magic. However, she wanted to live a normal life and began providing delivery services.

While delivering stuff to customers who live in distant places, she used her flying broom. It is a great pick for you because you get to explore a wonderful story of a girl and her independence.

All of this came to an end when she gave her life to protect other magical girls from the cruel fate that awaited them. Homura Akemi keeps fighting by herself in the world Madoka left behind for mankind to see her smile once more since she is unable to let her memories of her pass away.

Howl’s Moving Castle is another great magical anime movies from Miyazaki’s collection. It is entirely a magical movie filled with magic and magical species such as wizards, witches, demons, and so on.

In this series, Sophie, a young girl, is turned into an older woman by a witch. Now, she embarks on an adventure to find the cure for the curse and get back to her young self. She meets Howl, a wizard, and unintentionally becomes involved in a war between two kingdoms.

If you want to experience a wonderful magical world and some of the best magical powers, then this is the ideal choice for you.

Spirited Away is one of the greatest anime movies of all time created by Hayao Miyazaki. It depicts the magical world beautifully, complete with spirits and magical creatures such as dragons.

In this series, Chihiro Ogino, a young girl, is unfortunately trapped in this fantasy world alongside her parents from the human world.

She now has a lot on her plate, including figuring out how to get her parents back to being humans instead of pigs and how to leave this fantasy world. You have to watch this wonderful series once to know why it is the only anime to win an Oscar.

We’ll wrap up this article by going over each magical anime movie on the list. We hope you like this fantastic list and stay tuned with us for more interesting anime recommendations.