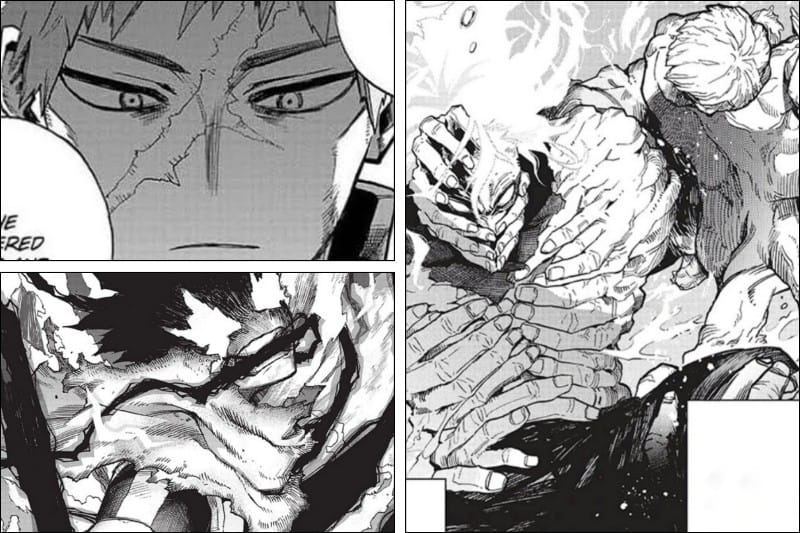 The epic fight between Midoriya and Shigaraki has finally begun after a long wait. However, the plot’s pace has suddenly picked up without much justification about how everything is happening. Perhaps My Hero Academia Chapter 369 Spoilers can give us some important hints. Meanwhile, let’s see what new information is out about MHA from the latest chapter.

The chapter luckily kept the focus on Shigaraki and Midoriya’s fight. Right when Midoriya starts to believe that Tenko is indeed gone, Mirio states an essential point. He affirms how Tenko lost his stability and defended himself when Mirio accused him of having no friends.

Thanks to Mirio, Midioriya decides to try and save Tenko if he’s still there. The following panels also give us a glimpse of Nana Shimura directly staring at Kotaro as she says that he (Tenko) is still there. But to cut off this little hope, Shigaraki declares that he is taking One For All right now, without any further delay. 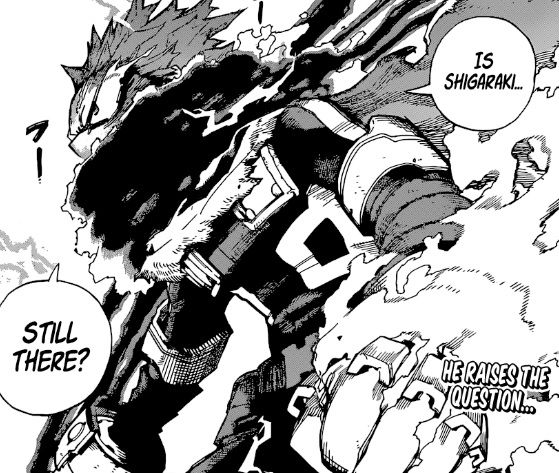 But Midoriya lands a massive smash sending the Floating UA shaking and moving from the initial spot. He claps back, addressing AFO that he will not allow him to get what he wants. Following this exchange, he begins landing back-to-back cleverly planned moves and combo attacks using Blackwhip and Fa Jin.

To everyone’s surprise, Midoriya uses the second user’s quirk, Transmission. Therefore, he has more room to come up with new attacks to overpower Shigaraki. However, by the time the last panel comes, it is unclear whether Midoriya is surpassing him or if his attacks are affecting him. We will find out soon.

The spoilers and raw scans of Chapter 369 are out. The next chapter will show the past fight between OFA’s second user and AFO.

Here are the brief spoilers of My Hero Academia Chapter 369. Below we have attached the raw scans and prediction part.

The parallel where AFO choked Katsuki and belittled him but was then taken aback by his actual power before he died.. same way he was taken aback by 2nds power now. He didn’t expect 2nds quirk to evolve this massively. pic.twitter.com/YZDxppsQ8O

Must Read: Strongest Users of OFA in My Hero Academia Ranked (with Quirks)

Thanks to Midoriya’s rage, he is somehow able to sustain his body while using 120% of his quirk. He can even use Blackwhip, Fa Jin, and the second user’s quirk, Transmission. This quirk, in particular, is best compatible with Midoriya’s fighting style and OFA.

While the working of the quirk hasn’t been explained yet, we only know that it is level or gear based. Therefore, we saw Midoriya uping the gear with every consecutive attack. Additionally, the second user speculates Shigaraki’s moves.

He notices how they both keep getting faster every time Midoriya hits him. Fans speculate that it is perhaps Kinetic Manipulation since it allows the user to change a target’s speed by touching it.

Lastly, Horikoshi paid homage to One Piece by using the concept of the gear since he is highly inspired by it. Fans were quick to notice and appreciate it. Furthermore, Midoriya seems to keep using more and more of his powers from the users as we see him landing a massive Detroit Smash. So we cannot be so sure yet about who will dominate the fight.

In addition to this fight, we currently have no update on all the other fights and heroes. We can only find out once the spoilers and later when the next chapter is out.

Chapter 369 will be out on October 10th, 2022, as per the weekly schedule of the manga. So that means no hiatus was announced by the latest chapter. We will soon learn more about the fight and if Midoriya can really subdue Shigaraki.

Where to Read My Hero Academia Chapter 369

My Hero Academia is officially available to read on Viz Media and MangaPlus Shueisha. It is best to read the manga on official sites since they both allow you to read the latest chapters free of cost. So you needn’t waste time and compromise over the quality you read the manga in. They also announce the chapter schedule so that you don’t miss an update.

Additionally, other platforms such as Comixology, Kindle Unlimited, Amazon, etc. for purchasing/reading. Therefore, you have plenty of options.