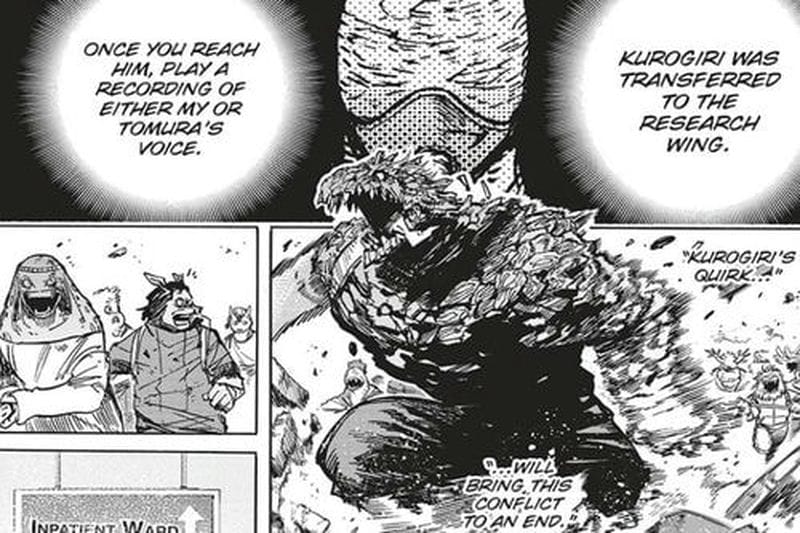 My Hero Academia Chapter 373 spoilers are here since the chapter is only four days away. Things are about to get worse for the heroes as Spinner manages to rescue Kurogiri after all. That’s the plot twist for the next chapter, as confirmed by the spoilers.

The latest chapter, along with the past few chapters, has strictly kept the focus on this scenario; therefore, soon, we will see what is happening in other locations. Although, the most critical fight between Midoriya and Shigaraki has taken a backseat all this while. We may get a glimpse soon. For now, we have to witness Kurogiri on his way to protect Shigaraki.

The spoilers of Chapter 373 are out, and we have some more motivational epiphanies to witness. The latest chapter is focused on Kurogiri’s rescue, and Spinner is so close to insanity. Although, the spoilers reveal that he will push himself even more. Let’s see how.

Here are the raw scans of Chapter 373.

Kurogiri and these 2 were the only good thing about this chapter #MHAspoilers #MHA373 pic.twitter.com/6WEoscDJZD

i rly do feel for the mutants, they all look terrified and confused 🙁 pic.twitter.com/ap7dJnScxP

Chapter 373 is set to be out on 20th November 2022. The manga is published in Shueisha’s Weekly Shounen Jump, and therefore, it follows a weekly schedule. New chapters are usually released every Sunday. So keep an eye out for them on your preferred channels.

Officially, you can track the manga on Viz Media and Mangaplus by Shueisha. Since both are official platforms for reading manga, you can create a free account and add MHA to your Favourite list. Worry not, because they allow you to access three of the latest chapters free of cost. Therefore, if you regularly read manga, you needn’t look elsewhere for it.