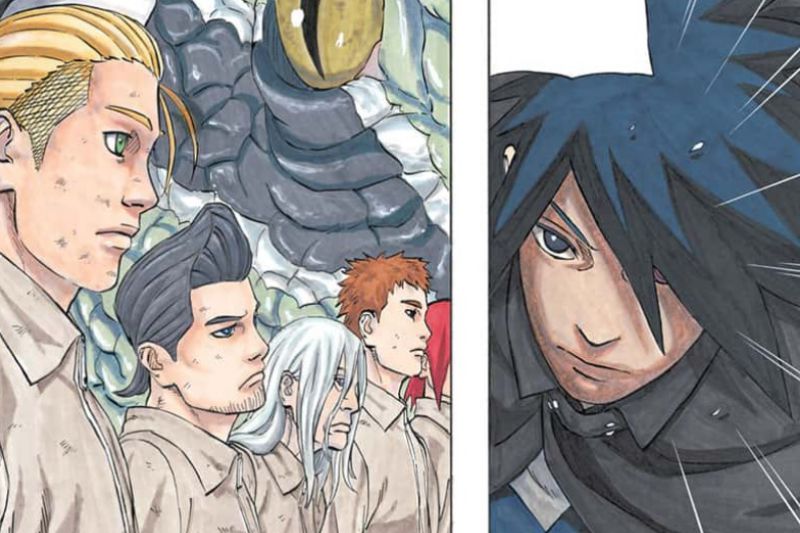 Naruto fans rejoiced when a manga adaption of the spin-off, Sasuke Retsuden, aka Naruto: Sasuke’s Story-The Uchiha and the Heavenly Stardust, was announced this October. Jun Esaka, the author of Sasuke Retsuden, captured the essence of the original series and its storytelling to perfection. Well, the wait is over since the first chapter of Sasuke Retsuden is out, featuring a colored cover and opening page. So let’s dive into it and find out what we know so far.

The light novel focuses on Sasuke and Sakura together, traveling to the mysterious Land of Redaku and more to find a cure for Naruto’s chakra disease. Naruto is suffering from a Chakra disease, as mentioned by Kurama. The illness turns one’s own chakra against themselves and causes rapid health declination.

Therefore, Sasuke, Sakura, and Kakashi immediately begin their investigation to find a cure for Naruto before it’s too late. And all the events and plot of the same are captured in Sasuke Retsuden, aka Naruto: Sasuke’s Story- The Uchiha and the Heavenly Stardust. 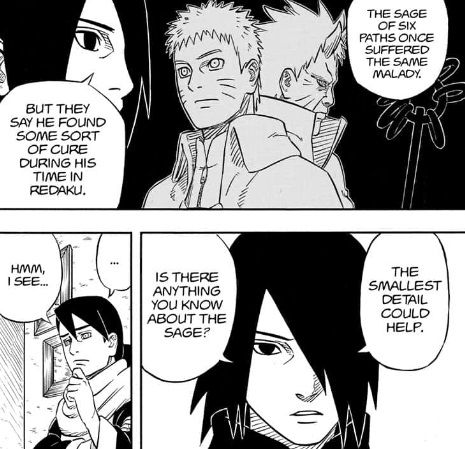 Chapter one introduces the settings of the world with lots of new characters. The chapter opens with a scene where Sasuke goes around asking the people of Redaku about the Sage of Six Paths. However, since the Redaku is too remote and has always been cut off from the rest of the world, nobody even knows what a shinobi is.

But luckily, Sasuke encounters a pair of a mother and daughter, Kail and Layla, who happens to know something. Kail takes out a book called the Book of Yore which has little but important information on the same. The book mentions that Hagoromo stayed at the Tartar Observatory, where he also healed himself. But over the centuries, the observatory is now a prison harboring prisoners of Redaku.

Therefore, Sasuke immediately enters the observatory as prisoner #487. He encounters the Director of the Tartar Observatory, Zanzul, who isn’t what he seems. Following this settlement, Sasuke is approached by a prisoner who proposes he joins him in escaping the prison.

However, the very next day, everyone witnesses how those who try to escape are brutally murdered by Meno, the mysterious dinosaur who guards the prison. Nobody can slip past it, and he only follows Zanzul’s commands. Sasuke realizes that the observatory is harboring darker secrets than he thought.

Why did Sasuke and Kakashi visit the Land of Redaku? 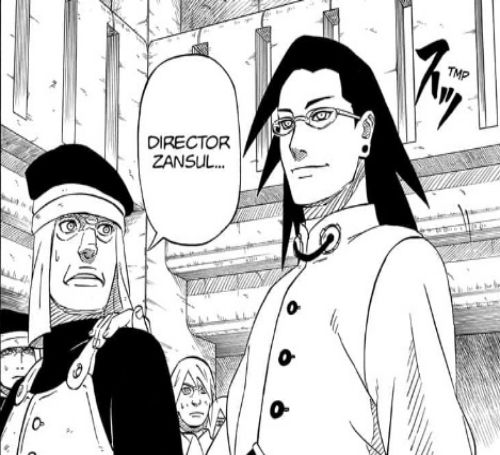 As the story clears out that Naruto is suffering from a life-threatening illness, Kakashi and Sasuke begin their mission to find a cure at all costs. Thanks to Kurama’s intel, they know that Harogomo also suffered from this chakra-inflicted illness and healed himself in the Land of Redaku.

Therefore, they begin their search in Rendaku, asking around to find any information regarding the same.

Given how the first chapter captured the events of Chapter 1 of the highlight novel next chapter of the manga will also narrate the events accordingly. 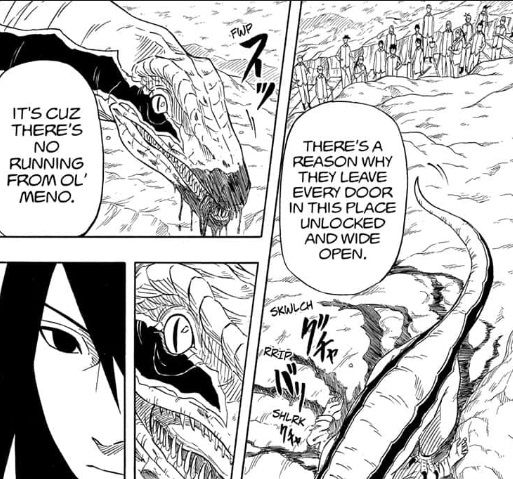 Now that Sasuke is settled in the Tartar Observatory, he will find out more about Zanzul and his goals. With Meno’s introduction, we know that the setting has dinosaurs now. But since they no longer exist naturally, how is there a dinosaur guarding the prison and is under Zanzul’s control? Sasuke, and we will find out in the next chapter.

Secondly, Zanzul isn’t fazed by Sasuke’s ninjutsu that he is a full-fledged shinobi. And despite observing his Sharingan, Zanzul simply just indirectly warns Sasuke to stay put and not cause any more trouble. Therefore, he clearly knows a lot about shinobi and likely about Hagoromo too.

The next chapter will capture the events where Sasuke investigates Meno vigilantly and learns more about the prisoners. However, it isn’t going to be as easy as it sounds, for Meno isn’t an average dinosaur. As for Sakura, perhaps we will see her make an entrance soon.

If the manga covers a good amount of plot in one chapter against its source, some interesting plot twists are on their way. Alternatively, chapter 1 has no deviation from the original plot, which is a good new way. It is quite clear this manga will compensate us for missing out on Sakura-Sasuke scenes and their bond amidst Boruto: Naruto Next Generation.

As per Viz, Naruto: Sasuke’s Story-The Uchiha and the Heavenly Stardust Chapter 2 will be out on November 5, 2022. Therefore, the manga is likely to follow a bi-monthly schedule. So, you can mark your calendars as we wait for Chapter 2 to tell us more. Fans are excited to witness more of Sasuke and Sakura’s bond as they together carry out one the most important mission of their lives.

Where to Read Naruto: Sasuke’s Story-The Uchiha and the Heavenly Stardust Chapter 2

Since Shounen Jump is the official publisher of Sasuke Retsuden, the manga is officially available to read on Viz Media. In addition to Viz, the manga is also available on Mangaplus Shueisha to read. Other official platforms, such as Amazon, Barnes and Noble, Comixology, etc., offer the manga for purchase.

Lastly, since Viz is quite strict about its manga, you may face some difficulties finding the manga on private sites. However, there are quite some that offer the a to read as it releases.

Now that we have answered all your questions regarding the wonderful spin-off, Sasuke Retsuden, and its chapter, we shall conclude the article.

We will be back with another article covering the next chapter and everything you need to know about it when it’s out and so on. Meanwhile, check out some more articles covering the latest chapters of some of the most popular manga.