Skip to contentHome » Anime & Manga » Who is the main character in Death Note? 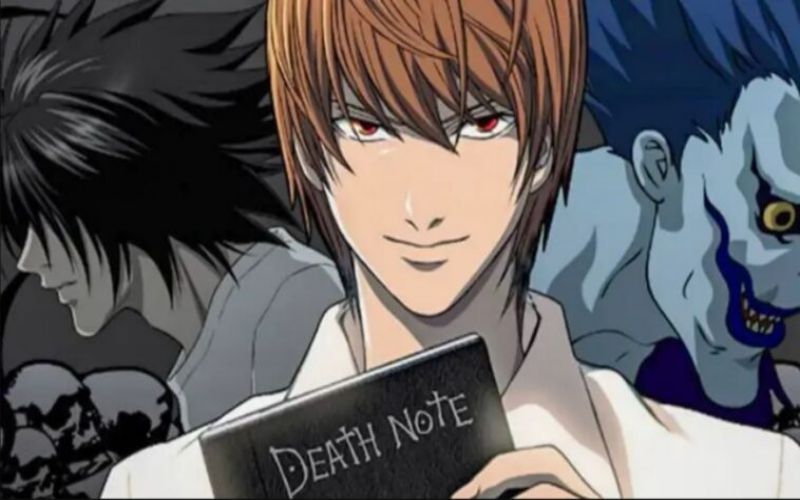 Tsugumi Ohba and Takeshi Obata‘s Death Note is the legendary anime of all time. Boasting a cleverly written plot with lots of plot twists, the series has been mandatory in every Otaku’s list. The main character in Death Note is Light Yagami, rivaled by L Lawliet. However, both characters are not your typical hero or villain.

Each character is extremely well-written and fleshed out to contribute to the plot. And the supernatural elements make it even more interesting and unique.

For example, the shinigami Ryuk is the key character to the plot because he started it all. He dropped the Death Note on earth simply because he was bored and wanted some entertainment. Lucky for him, Light found it, and so began the realization of his twisted idea of justice and murders.

Death Note follows the life of an extremely smart high schooler, Light Yagami. Bored with his life and frustrated with all the injustice in the world, he happens to find the Death Note that Ryuk dropped.

Had it been any other average person, they might not have cared enough about the book. However, Light was too ambitious when he realized he finally had the power to change the world as he wanted.

Death Note comes with several rules but grants the power to kill anybody in any specific way and time by simply writing their names. Therefore, the book itself is a double-edged sword that needs incredible intelligence and a solid plan to use it well.

And Light was simply all of that. He begins killing criminals using Death Note while Ryuk hangs out around since it is amusing to him. He wanted drama, entertainment, and danger, and Light just gave him all of that.

This is because the series was concluded within only one season. Nevertheless, Death Note is still one of the best anime to have ever been created, thanks to Tsugumi and Takeshi’s genius minds and creativity.

Apart from Light, the deuteragonist of Death Note is the genius detective, L Lawliet. L was everything but an average detective. The man has an unfathomable genius and is by far the most uniquely written character.

He rivaled Light even without the massive advantage that he had, i.e., Death Note. By simply analyzing the killing pattern and time, he immediately found out that the person is a high schooler.

With L closing in on him, Light ups his game and further drowns in his ambitions. He announces himself as the god of the new world, Kira.

However, amidst everything, L directly approaches him out of nowhere and directly suspects him to his face. At this point, the plot becomes extremely interesting with spine-chilling plot twits.

Furthermore, later in the story, we are introduced to another character who possesses a Death Note, Misa Amane. The difference here is that she is a famous model and barely cares about Death Note. To top it all off, with the shinigami attached to her, Rem even genuinely cared about her.

Therefore, the plot complicates even more, with stakes rising as high as a skyscraper. If you haven’t watched this mind-boggling anime, watch it right away. And now that you know about the main character in Death Note and its main cast, we shall conclude the article.

Feel free to browse through and check some more interesting articles below and come back for more!