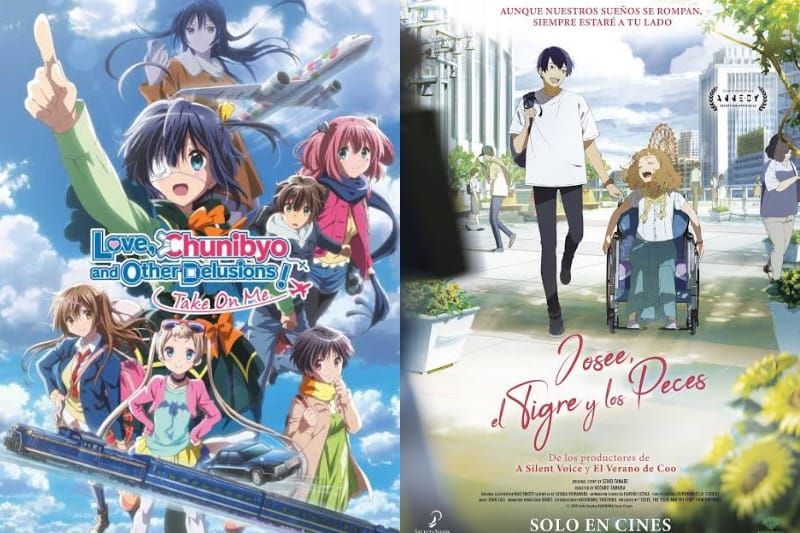 Rom-com is one of the most popular genres in the anime world. They were a fantastic way to immerse yourself in a beautiful love story full of humor and comedic activities. However, because we do not have enough time to watch the entire series, we prefer movies over series.

We are all immersed in our childhood stories and feel overly connected to the characters while watching any rom-com anime movies. In this article, you will find the Top 15 Rom-Com anime movies that you can enjoy in 2022, so just get down to the list.

15. The Moment You Fall in Love 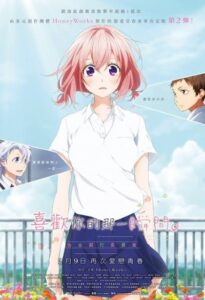 The Moment You Fall in Love is one of the great rom-com anime movies directed by Tetsuya Yanagisawa. It is the sequel to the I’ve Always Liked You anime movie and was first released on December 17, 2016.

It follows the story of a group of high school students and their beautiful love story. Each of its characters seems so realistic that we easily connect with their feelings. They show us how beautiful the feeling of love is! No matter how many rejections we receive from our crush. 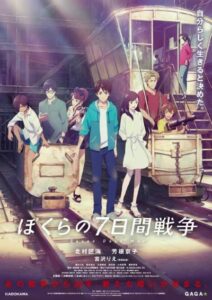 Seven Days War is one of the well-known rom-com anime movies that was directed by Yuta Murano. This anime movie was first released on December 13, 2019.

It centers on a group of six high school teenagers. They went on a secret adventure, spending seven carefree days at a deserted mining plant. 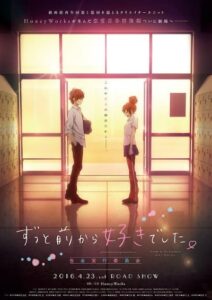 I’ve Always Liked You is a Japanese rom-com anime movie that was directed by Tetsuya Yanagisawa. This anime movie was first released on April 23, 2016.

The story of this movie is revolves around multiple high school students. They were all in love with one other but were too reluctant to confess it.

However, the film is really about a lovely love story between Setoguchi and Natsuki Enomoto, who were neighbours. It also has some hilarious sequences that will make you laugh out loud. 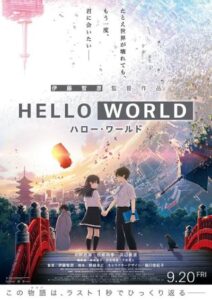 Hello World is a popular rom-com anime movie that was written by Mado Nozaki and directed by Tomohiko Ito. This anime movie was first released on September 11, 2019, in Kyoto.

The story of this anime takes place in Kyoto in 2027, where Naomi Katagaki, a high school student, meets Ruri Ichigo.

He claimed to be a time traveller who went back in time a decade to save his classmate. They progressively become closer and even fall in love with one other. 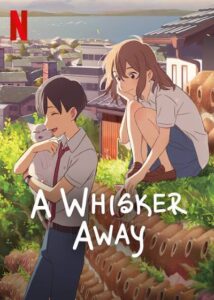 A Whisker Away, also known as “Wanting to Cry, I Pretend to Be a Cat“, is a beautiful rom-com anime movie that was directed by Junichi Sato and Tomotaka Shibayama. This eye-catching movie was first released on June 18, 2020.

The plot of this anime follows Miyo, who secretly loves her classmate Kento. To close in on Kento, she uses a mysterious mask that helps her transform into a cat. Due to transforming into a cat, she doesn’t know that she’s started to lose herself. 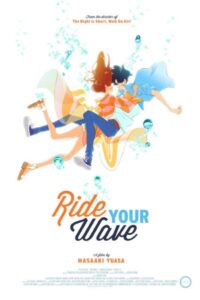 Ride Your Wave is a popular rom-com anime movie that was directed by Masaaki Yuasa. This anime movie was first released on June 10, 2019, at the Annecy International Animated Film Festival.

This film depicts a wonderful love story between Hinako and Minato. Hinako loves surfing while Minato is the firefighter. Despite their completely opposite personalities and thoughts, they fall in love. 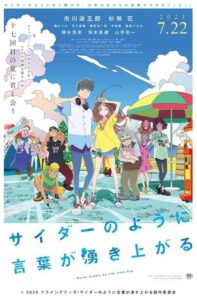 Words Bubble Up Like Soda Pop is beautifully directed by Kyohei Ishiguro and was first released on July 25, 2020, at the Shanghai International Film Festival.

This movie’s plot revolves around a romance between two characters who have difficulty communicating with others. The first character is Yui Sakura, an introverted boy who can only communicate through his haiku writing.

The second character is Yuki, who is an online influencer and mostly wears a mask over her mouth to conceal her braces that attempt to correct her buck teeth.

8. Library War: The Wings of Revolution 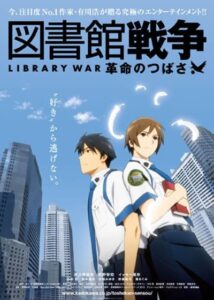 Library War: The Wings of Revolution is excellently directed by Takayuki Hamana and was first released on June 16, 2012 in Japan. It mainly follows Kasahara Iku and Dojo Atsushi who are in love and go on a date.

On that date, they received an emergency call and informed them that Japan was under a terror attack. Now their beautiful romantic date turns into a very vicious mission in which they have to protect famous author, Touma Kurato. 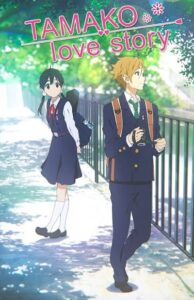 Tamako Love Story is one of the best rom-com anime movies that was directed by Naoko Yamada. This beautiful anime movie was first released on April 26, 2014.

It mainly follows the story of Mochizou, who has decided to relocate to Tokyo to study. However, before he does so, he musters the courage to eventually confess his love to his best friend, Tamako.

On the other hand, Tamako is taken aback and unsure how to react, and her life is forever altered as a result of this incident.

6. Love, Chunibyo, and Other Delusions: Take on Me 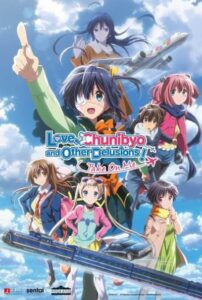 Love, Chunibyo, and Other Delusions! Take on Me is one of the best rom-com anime movies directed by Tatsuya Ishihara.

It was released on January 6, 2018, and depicts an unbounded love story between two high school students, i.e., Rikka Takanashi and Yuuta Togashi. In this movie, they face very big problems due to Rikka’s older sister, who will separate them from each other.

However, they try their best and also take help from their friends to solve this problem. It’s very interesting to see how they overcame this problem. 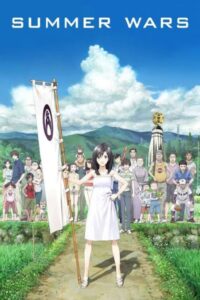 Summer Wars is one of the most popular rom-com anime movies written and directed by Mamoru Hosoda. This anime movie was first released on August 1, 2009.

The plot of this movie revolves around Kenji Koiso, a math genius. He works part-time as a moderator on a virtual reality computer. One day, he’s invited to the birthday party of his friend’s grandmother.

However, he is falsely accused of hacking a virtual world by Love Machine, a self-aware, sadistic artificial intelligence. Now, he has to repair the damage and find a way to prevent the rogue computer programme from wreaking further havoc.

4. The Night is Short, Walk on Girl 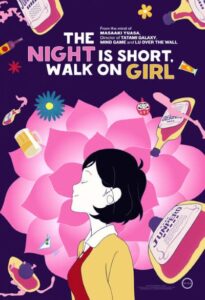 The Night is Short, Walk on Girl is an excellent anime movie directed by Masaaki Yuasa. It is the sequel to Tatami Galaxy, a well-known series, and was first released on August 1, 2009.

This movie revolves around Kohei, a beautiful girl, and his senior, whom she usually calls Senpai. Her senpai tried lots of methods to confess to her, but he faced lots of difficulties doing it.

This film is considered one of the most popular rom-com anime movies because it features romantic relationships and a lot of humor. 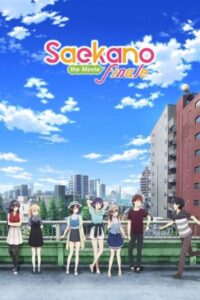 Saekano the Movie: Finale is one of the high rated rom-com anime movies on IMDb. It was directed by Akihisa Shibata and Kanta Kamei and was first released on October 26, 2019.

The plot of this anime follows the stories of Megumi Kato and Tomoya Aki, who are working for Blessing Software and developing the next game for them. Due to the development of the game, they are also developing feelings for each other. 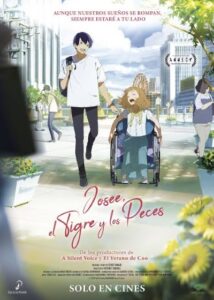 Josee, the Tiger, and the Fish is one of the most hyped-up rom-com anime movies directed by Kotaro Tamura. It was first released on October 30, 2020, at the Busan International Film Festival.

The plot of this film centers around the romance of Josee, a young girl who cannot walk and has rarely left the house by herself due to her handicap.

Whereas our male lead is a university student name Tsuneo. He first sees Josee with her grandmother walking her in the morning, and they eventually cross paths. 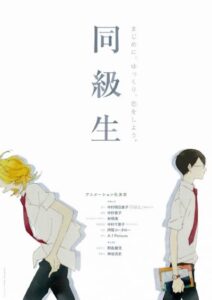 Doukyusei Classmates is one of the most popular BL anime movies directed by Shoko Nkamura and was released in 2016. It depicts a beautiful love story between two high school boys, i.e., Rihito Sajo and Hikaru Kusakabe.

Throughout the series, there did lots of humorous activities that made you laugh to the fullest. It is a great choice that perfectly demonstrates romance and comedy simultaneously.

As a result, it became one of the best rom-com anime movies with the highest IMDb rating.

We’ll conclude this post by discussing each anime film on the list. This incredible list was compiled using IMDb ratings (2022) and fan popularity. Despite being an anime film, they surpasses the majority of rom-com anime series.