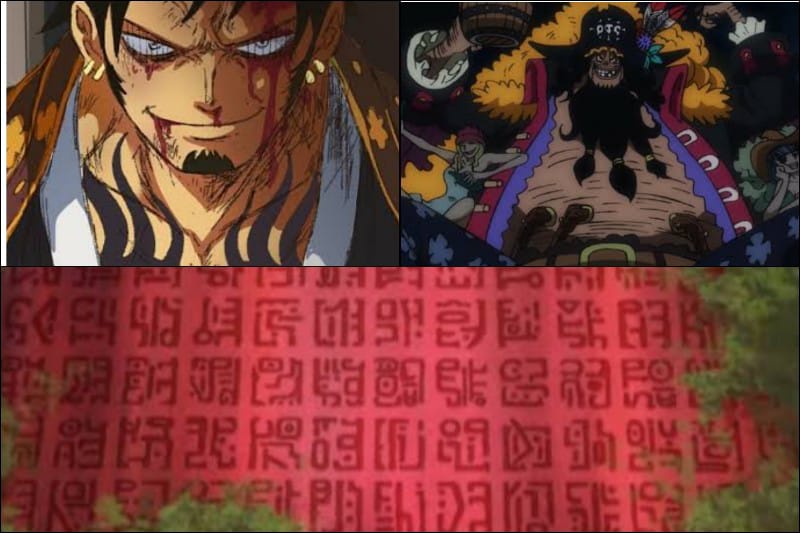 We are back with another spoiler article, and this time it is for One Piece Chapter 1063, after witnessing an interesting ending of Chapter 1062 where the remnants of the CP0 are on the move to eliminate Vegapunk. Fans are excited to think how Lucci will respond to seeing Luffy this time. CP0 will definitely plan to capture Nico Robin rather than eliminate Vegapunk when the WG knows that Straw Hats are also on Egghead Island. So, let’s discuss the happenings of the next chapter.

Note: In One Piece Chapter 1062, Oda sensei mistakenly put the number Punk 06 instead of 05. So, the one that appeared in front of Luffy, Bonney, Chopper and Jinbei was Punk 05, Atlas (Violence), not Punk 06. Oda sensei sent the correction on the same release day and apologized for it. Another correction is that Seraphin Kuma has white hair like other Seraphins. Below we have attached the correction details. 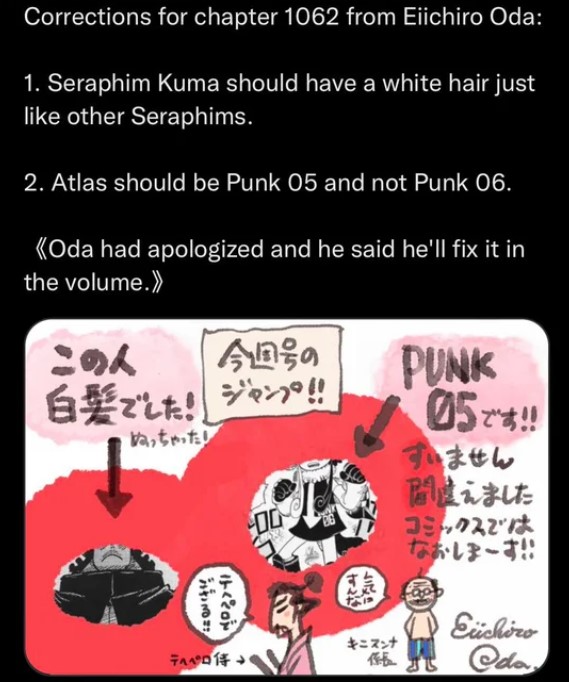 Finally, the confirmed spoilers are out. The next chapter is going to be an exciting one. We will witness another fight, and this time it is between Blackbeard Pirates vs. Heart Pirates. The title of the next chapter is “My Only Family.” It shows the relationship between Kuma and Bonney. 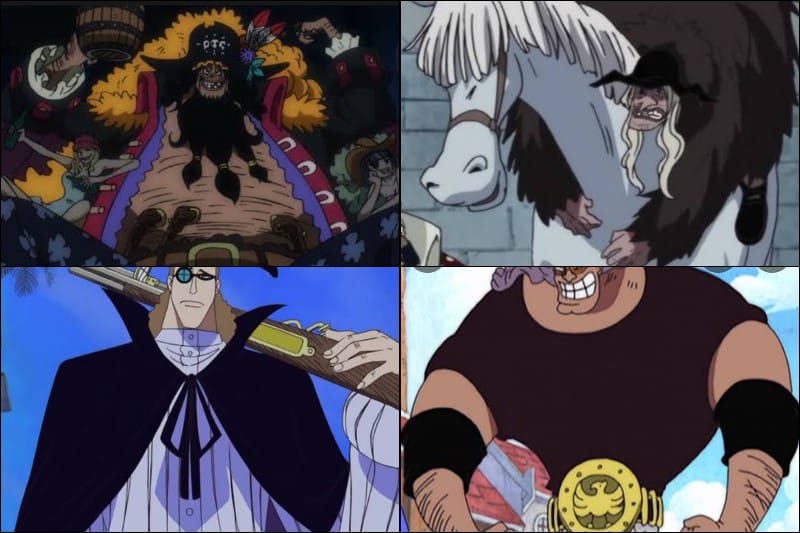 On the final page, the one-on-one battle is about to begin between Law and Teach. Teach will say that Kaido must have one Poneglyph, and he’ll take all your Road Poneglyph. Law will reply that he is ready and winner takes all.

In the chapter, you will see white bolts when Law uses Haki on Doc Q, but not the black bolts. We’ve seen this before when someone has used Haki with ‘Conqueror Haki’.

And the battle begins.

Must Read: Who is Vegapunk? About All Six Vegapunks in One Piece

What will happen if Teach takes Law’s fruit? In our opinion, Teach is not interested in Law’s devil fruit. Because to operate Ope Ope no Mi, one should have knowledge of medical science. So, it will be a waste to risk for Law’s devil fruit.

On the other hand, as mentioned in the chapter, he only wants the Road Poneglyphs. There is a high possibility that Teach will win this fight and, in exchange, Law will give all his Road Poneglyph to him.

The cover page of Chapter 1062 showed an emotional excursion in Chocolat Town. Everyone was frozen to death, and now in Chapter 1063, we witness Cracker is also frozen. So, who was behind it? We know that all of you are thinking about Aokiji.

So, there is a possibility that the remaining Blackbeard Pirates attacked Toto Island to collect Poneglyphs. Presently, Big Mom is dead, and there is no news of her crew.

Only Katakuri and Oven are there to fight. Indeed, they both are very powerful, but still, they are against the Blackbeard Pirates. So, it will be impossible for two of them to defeat the whole crew.

The chapter began with the introduction of Vegapunk 02 Lilith, the Evil one. She decided to rob the Straw Hat Pirates. However, Punk 01, Shaka warned her that it was the Emperor’s crew. They look soft and act childish, but they have the potential to take her down in an instant.

It was fantastic to witness the shocking expression on Lilith’s face. Punk 01 commanded her to bring them to the lab because Vegapunk wanted to discuss something with them. In our opinion, Vegapunk knows that CP0 is on his way to eliminating him, and that’s why there is a possibility that he will ask for help from the Straw Hat Pirates.

After that, we witnessed the appearance of Punk 05, Atlas appeared in front of Luffy, Jinbe, Chopper and Bonnie. She has a violent trait that why she punched Luffy and other holograms while talking.

She unveiled the secret behind the temperature regulation of this island to them. So from Luffy’s side, Punk 05 will guide them to the main lab, where Punk 02 is also arriving with the Straw Hat Pirates.

In the end, Lucci, Kaku and Sussy arrive to take down Vegapunk where Kaku explains to everyone that Vegapunk created six satellites to help him, and these satellites are all Vegapunk together.

Then we witnessed a glimpse of Kuma’s Seraphim (having white hair, as mentioned in correction). Lucci asked the reason behind eliminating the most useful man in the world, but Kaku warned him to drag everyone into trouble.

It clearly shows that Lucci was not satisfied with WG’s orders. He thinks that Vegapunk has some connection with the Lulusia Incident. Let’s see what will happen next.

There is a high possibility that CP0 will clash with the Straw Hat Pirates, and Luffy and Jinbei will engage with Seraphin Kuma. In this way, we may see the full potential of Seraphin and how powerful they are.

According to the WG, they are as much as strong as the Warlords, but we don’t think so. Moreover, this island is going to be heaven for Franky. We hope that Franky will learn many things here and can make General Franky even larger than a giant.

There is no break this week, which means One Piece Chapter 1063 will be released on Sunday, i.e., October 16, 2022. The full raw scans will surface tomorrow.

We will update this post once we get the raw scans. It will be great to witness the clash between the Blackbeard Pirates and the Heart Pirates. Here’s Oda sensei is displaying that Law may lose this time.

Where to Read One Piece Chapter 1063

Now, One Piece Chapter 1062 is available on the official websites Viz Media and Mangaplus Shueisha. And One Piece Chapter 1063 will be available on October 16, 2022. Till then, you can read the spoilers and raw scans to get an idea of what will happen in the next chapter. We will be back with another One Piece article. Till then, stay tuned with us and read the articles mentioned below.