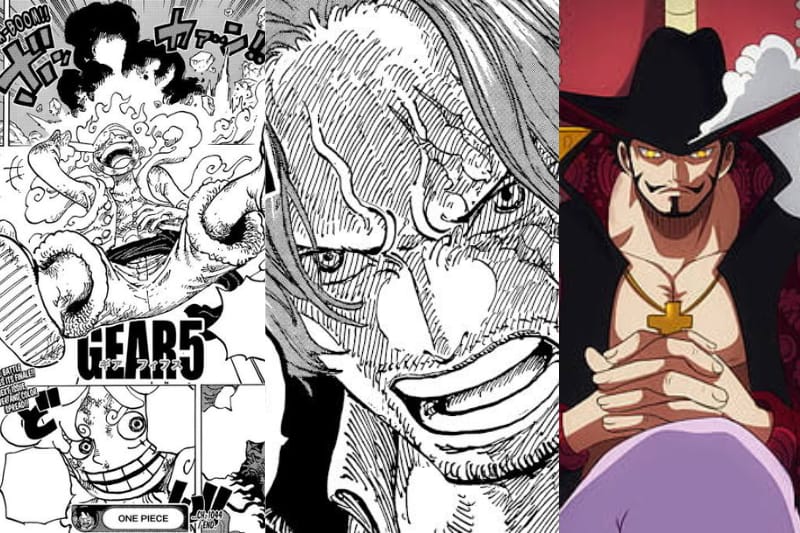 One Piece has entered its final saga, with Oda Sensei stating the end of the series is near. Now that we have entered the final saga, we feel the need to cover the Top 15 actively strongest Pirates in One Piece as of now.

With major power shifting after the Wano arc, such as Luffy’s Gear 5, and Blackbeard’s two devil fruits, here are the Top 15 Strongest Pirates in One Piece. 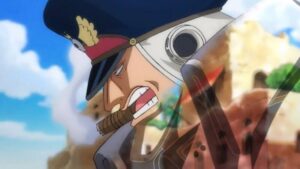 Shiryu joined the Blackbeard Pirates after Teach freed him in Impel Down. He stole the abilities of the Suke Suke no Mi (Invisibility-based Paramecia Devil Fruit) after he killed Absalom. Shiryu is a proficient swordsman and wields the legendary blade Raiu.

He is said to be as powerful as Magellan in terms of power, speed, ad durability. Shiryu’s skill of stealth was said to be legendary even before gaining the Suke Suke no Mi’s abilities. Shiryu is merciless, and when he was a jailer in the Impel Down, he would kill prisoners on a whim. Shiryu’s combat & swordsman skills gained him infamous notoriety in the current One Piece and put him in fifteenth place on this list. 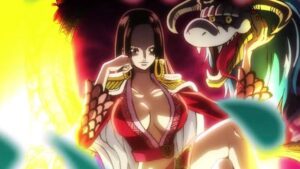 The beauty that could turn you into stone along with the brawns to turn you to dust. Boa Hancock is the perfect combination of beauty brains and brawns. Queen of the Amazon Lily, Captian of the Kuja Pirates, and a former warlord, Boa Hancock wields the ability of the Mero Mero no Mi (Love-based Paramecia Devil Fruit). The fruit allows her to turn people as well as nonliving things to stone.

Boa Hancock is well versed in all three forms of Haki and is also a formidable hand-to-hand combatant. She was able to kick a Pacifista whilst turning it to stone. Hancock’s strength and intelligence combined make a deadly combo. 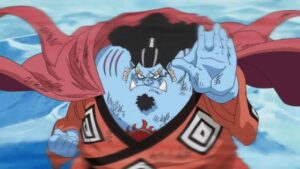 Next up, we have the Helmsman of the Straw Hats, “Knight of the Sea” Jimbe Oyabun. Jimbe is well versed in Fishman Karate, and being a Fishman himself, he has great strength, durability, and stamina. Jimbe is a former Captain (Sun Pirates), Warlord of the sea, and a member of the Big Mom Pirates, adding a tonne of experience and testaments to his strength.

After surfing over a tsunami-level wave and defeating Who’s Who in Wano, he established his place as the Helmsman of the Crew and fearless pirate in the One Piece World. 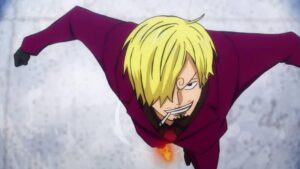 Next up, we have our chivalrous cook of the Straw Hats, Vinsmoke Sanji. Sanji is adept at using Observation and Armament Haki. He is also theorized by us to be a Lunarian and one of the most chivalrous warriors in One Piece.

Sanji has a genetically modified body. Queen’s sword shattered on contact with his neck showing just how durable his body is. Along with his genetically engineered body and the Black Leg Combat Style, which is his own creation, Sanji is the deadliest cook in One Piece. 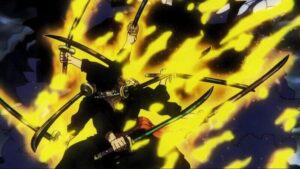 After receiving the sword Enma, Zoro truly manifested into becoming the King of Hell. As the first mate to the Straw Hat Pirates, Zoro has the ambition the become the World’s Best Swordsman. After the time skip, Zoro has shown great improvement in swordsmanship skills.

Zoro has been revealed to have all three forms of Haki. He wields three swords which are the Sandai Kitetsu, the Wado Ichimonji, and Enma, two of which are among the 21 Supreme Grade Swords. Zoro has unbelievable endurance that, coupled with his loyalty towards his captain, makes him a force to be reckoned with. 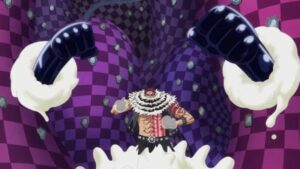 Next up, we have the Son of Big Mom, the First mate to the Big Mom Pirates and an admirable foe to Luffy, Charlotte Katakuri. Katakuri wields the Mochi Mochi no Mi (Mochi-based Paramecia type Devil Fruit) and has the most powerful Observation Haki in One Piece as he is able to see a couple of seconds into the future.

Katakuri is an honorable opponent and can use All three forms of Haki with efficiency. 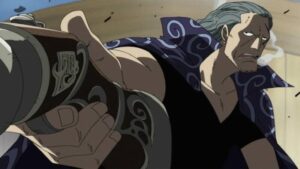 Next up, we have the first mate of the Red Hair Pirates, Benn Beckman. Although much is not revealed about him or his power yet, it is safe to assume he, too, is a powerhouse. Aside from his power, his intelligence is also to watch out for; as Oda stated, Benn is the most intelligent character in the East Blue Saga.

Benn Beckman was able to freeze an admiral, that too an overpowered one like Kizaru after he fought off Marco and Whitebeard himself on the spot with the raise of his gun. That is enough statement of his power as of now, as we are sure to see more of it in the final saga. 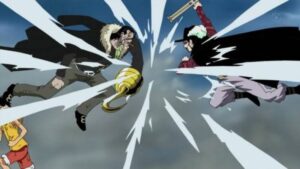 Crocodile (Mr. 0) wields the Suna Suna no Mi (Sand-based Logia type Devil Fruit). He was one of the Seven Warlords, leader of the criminal organization Baroque Works and a pure criminal mastermind. With his contacts in the underworld, he formed the Cross Guild in alliance with Mihawk.

Crocodile has the power to rob a human of his moisture as well as perform a bunch of mind-blowing attacks using his devil fruit. His evil genius, coupled with his thirst for power, makes him a huge threat and on eighth place on this list. 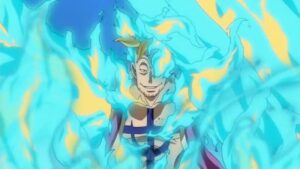 Marco the Phoenix was the first division commander of the Whitebeard Pirates, wields the Mythical Zoan type devil fruit Tori Tori no Mi, Model: Phoenix. Just like a Phoenix, he has healing abilities and is the only devil fruit user in this list without offensive abilities. Still, he was powerful enough to face Kizaru, Akainu, and Aokiji in their prime during the war, making him a force to be reckoned with

After Wano, we will see more of Marco as he will always come to Luffy’s aid because of Whitebeard’s wish to not let that boy (Luffy) die.

Eustass “Captian” Kid captain of the Kid Pirates and is the devil fruit user of the Paramecia type fruit Jiki Jiki No Mi. His devil fruit allows him to manipulate magnetic objects and use them as he pleases. He is wild and untamed, with strong allies making him even more powerful.

Kid is one of the select few on this list who can use all three forms of Haki. With his devil fruit awakening, he can control magnetic fields and polarities of metallic objects as well as assign magnetic properties to alive things. He showcased his awakening when he defeated Big Mom along with Law. That, coupled with his erratic behavior, makes him a huge threat and on the sixth place on our list. 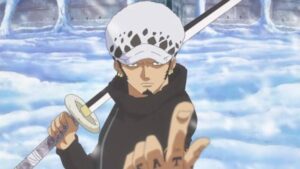 Trafalgar D. Water Law is one of the most dangerous devil fruit users on this list. With the Ope Ope no Mi. This devil fruit grants its user the ability to manipulate anything and everything within a sphere of influence (even interchange bodies and souls).

As captain of the Heart Pirates, Law is one of the most well-thought-out powers in the series. With the awakening of his devil fruit in the Wano Arc, Law was able to distort space by putting a coat of his sphere on his sword and using it to attack. Along with this, he has a variety of attacks. He can also use his devil fruit to heal others, putting him in fifth place on our list. 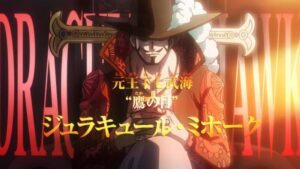 “Hawkeye” Mihawk is the Strongest Swordsman in One Piece, making him a huge threat to the world government. He has immense skills and power, which he has shown multiple times. Mihawk is the only person strong enough to call Shanks a rival in this list, as they used to duel a lot back when shanks had both his arms. Not to mention he was the only Warlord of the sea without a crew.

Mihawk has developed his Observation Haki and Armament Haki to the fullest and uses them in battle nonchalantly with incredible skill. Mihawk, along with Crocodile, formed the Cross Guild using Buggy as a front, which has created major ripples in the world of One Piece. 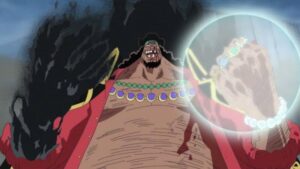 Teach is one of the most brutal examples of a treacherous pirate in the whole of One Piece. He has two of the most powerful devil fruits, which are the Yami Yami No Mi (Darkness Logia devil fruit) and Gura Gura No Mi (Quake Paramecia type devil fruit), which originally belonged to The World’s Strongest Man Whitebeard himself.

As Captain of the Blackbeard Pirates, he has multiple powerhouses in his crew which he gathered from Impel Down. It is said that the Gura Gura no Mi had the power to destroy the world, coupled with Yami Yami no mi, which is a broken devil fruit on its own, being able to hurt other devil fruit users without Haki is one of the main reasons why Teach is on the third place in this list of Top 15 Strongest Active Pirates in One Piece. 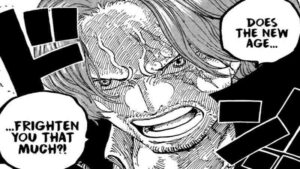 Oh, to be able to walk into a war and stop it by words. That’s exactly what Shanks did in War Summit Arc. The captain of the Red Hair Pirates is one of the most hyped characters in One Piece, and with good reason. He has the most balanced crew out of all the previous Yonko and has the most powerful Conquerer’s Haki in the entire One Piece. Shanks is the only character in this list to have only one arm yet be placed so high in terms of power.

Shanks has a long sword which he used to split the heavens with “The World’s strongest man” ( Whitebeard) himself. His influence, coupled with his balanced yet broken power level, puts him in second place on this list.

Must Read: Is Shanks Evil? Latest Shanks’ Theory in One Piece 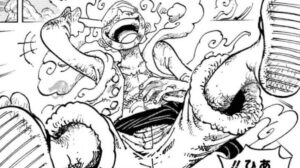 Finally, the strongest pirate as of now in One Piece is arguably or not our protagonist “Joyboy” Luffy, Captain of the Straw Hat Pirates himself. In the climax of Wano, he awakened his devil fruit. Gear 5, as it is called, reveals his fruit to not be the Gum-Gum fruit but a Mythical Zoan Fruit Hito Hito no mi: Model Nika (Sun God). His Devil Fruit has the ability to wield Freedom and Hope, spreading joy which is indeed a ridiculous ability. It is pure contrast to the theorized final antagonist, Blackbeard’s abilities.

Luffy also has Conquerer’s Haki, which cannot be acquired by training; rather, one is born with this quality of a King. Luffy has, as Oda stated, a ridiculous devil fruit, and that, coupled with his knowledge of all three forms of Haki as well as advanced techniques of Haki such as Ryuo, makes him the Strongest Pirate in One Piece.

One Piece has entered into its final saga, and as the plot Oda Sensei has managed to thicken and marinate for the last 25 years, it will finally yield fruit. With this, we shall conclude this article. If you liked this, check out the other One Piece content, and we shall see you next time with more.