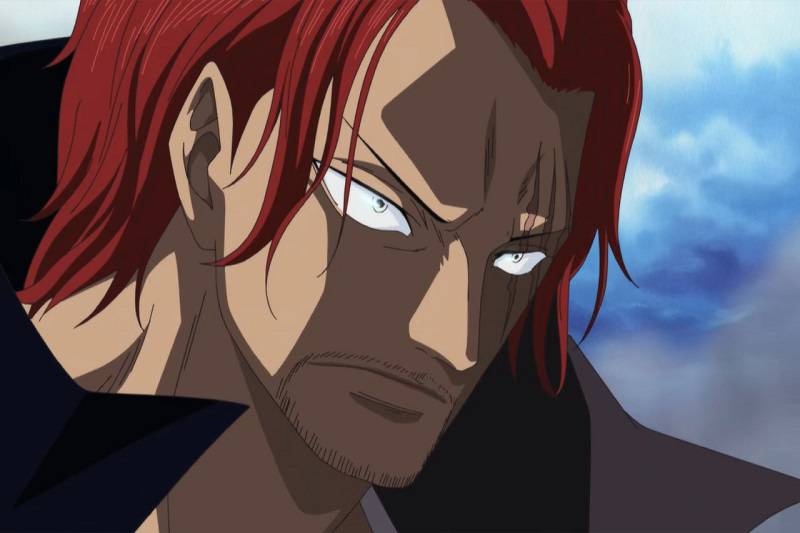 One Piece is the manga that follows the adventures of Luffy & his crew and his journey to becoming pirate king. The person who inspired Luffy to become a pirate is Shanks. Shanks is one of the most influential characters in One Piece’s world. After the release of the new movie “One Piece: Red,” many fans were astonished after witnessing the fearsome strength of Shanks. This brought a lot of curiosity to fans, raising the query, “How strong is Shanks?”

Shanks is currently the strongest Conqueror Haki user in the One Piece series. He is known as the Killer of the Observation Haki, who doesn’t let his opponent see through the future. Shanks is the emperor of the sea whose power level is equal to that of Kaido, Big Mom, and Black Beard. He leads the Red-Haired Pirates, whose strength is based on the pure raw power of Haki. His crew excels in using Haki; the most prominent user in his crew is Ben Beckman and Yasopp.

Shanks was founded by Roger & Rayleigh, as shown in the movie inside a treasure chest when he was one year old. Shanks became an apprentice in Roger’s crew along with Buggy. At some point in time, Roger gave Shanks his Straw Hat. He traveled across the world under Roger’s captaincy in search of Road Poneglyphy. Shanks did not travel to Raftel, as his friend Buggy got untimely sick.

Later in the series, Shanks grew up to be an influential pirate in the new world and rosed up to the level of Yonko. He gave his straw hat to Luffy and told him to become a great pirate.

How Strong is Shanks in One Piece? Shanks’ Power Level

Shanks is one of the strongest characters in the One-Piece series. He single-handedly stopped the Marineford war without putting up any effort. Before he arrived at Marineford, he easily stopped Kaido from interfering in the war. At first, most of the fans thought that how Shanks stopped Kaido with ease. The answer was given to us in the latest movie as it made us witness the true strength of Shanks. We saw that the Marine Admirals were frightened to the core after witnessing his power in the movie. 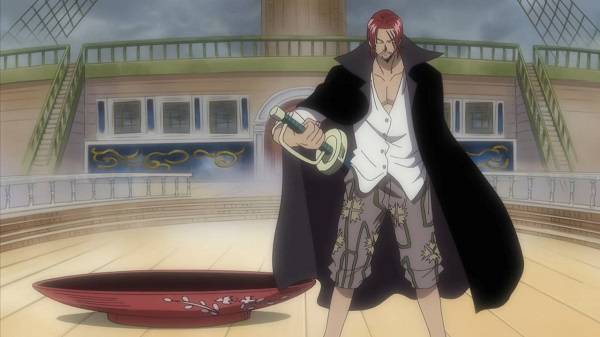 Shanks is equally powerful as Kaido. Also, based on Haki Shanks has the upper hand, but if we compare them based on brute strength and fruit’s ability, Kaido overwhelms him. Even with the power of the devil fruit, Kaido had to withdraw his forces since he knew how dangerous Shanks was.

In the past, Shanks used to share a rivalry with Dracule Mihawk, aka Hawkeye. They always used to duel like legends, and it is said that their battles echoed through the entire grand line whenever they clashed.

When Shanks and Mihawk fought, he had two hands, meaning his bounty was around 1 billion at that time. But after losing his left arm, Mihawk considered himself the strongest swordsman.

However, after that, he became Yonko, so it clearly shows that his power level increased tremendously within this period; therefore, currently, Mihawk is not as powerful as Shanks.

Coming to the strongest member of the Big Mom pirates other than Big Mom is Katakuri, who is an exception at using Observation Haki but is no match to Shanks. As Shanks is known for being a Killer of observation Haki, Katakuri is no match for him. Thus, we can say that Shanks alone is stronger than the entire Big Mom crew.

When it comes to Blackbeard, another big player in the new world, he shares some sort of history with him. Shanks told Whitebeard that Blackbeard was responsible for giving him the three scars around his left eye. During Marineford War, Blackbeard acknowledges that Shanks is dangerous as he withdraws from the war after his arrival.

In a nutshell, Shanks’ Power Level is somewhere equal to Kaido and Big Mom’s level but not above Roger and Prime Whitebeard.

How strong is Shanks’ Haki in One Piece?

In One Piece’s world, Haki is a dormant ability that exists in every person. There are three types of Haki which are mastered by only a few. Shanks is one of the characters in One Piece who manages to master all three forms of Haki. 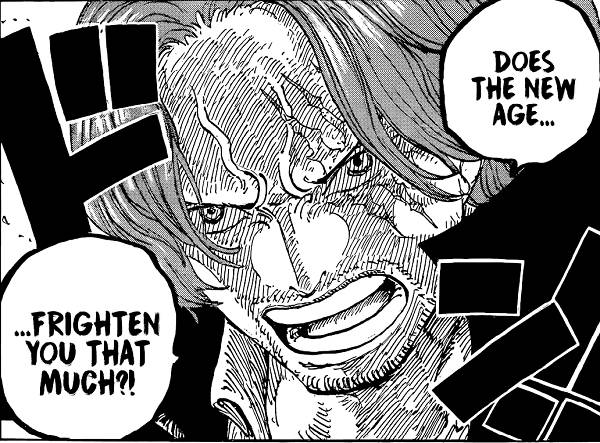 During the climax of the Wano arc, Kaido tells Luffy that one cannot reach the top alone with the power of Devil Fruit. To reach the top, one must master the art of Haki.

Also, he goes on to say that Gol D. Roger is one of the few people who conquered the world without the power of the Devil Fruit. So, here, let’s discuss Shanks’ all three types of Haki.

Shanks is an exceptional Observation Haki user. During the post-Wano arc, he easily detected the presence of Aramaki and scared the marine admiral. In the manga, he is shown rarely to use this power.

Shanks is an excellent Armament Haki user. During the Marineford arc, he efficiently managed to stop the magma-infused punch of Akainu to save Coby. It was the same, which managed to make a hole in Ace’s chest. When Shanks stopped Akainu’s punch, he was frightened to see him. 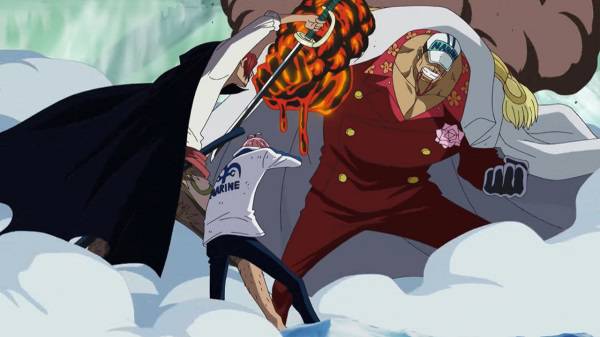 There are only a few users of Conqueror’s Haki, and Shanks is one of them. He is the strongest user in the entire One Piece verse. Shanks used this Haki a lot of times in the series. He first used this Haki to scare Sea King to save Luffy and later made half of the crew of Whitebeard Pirates pass out during his meeting with him. 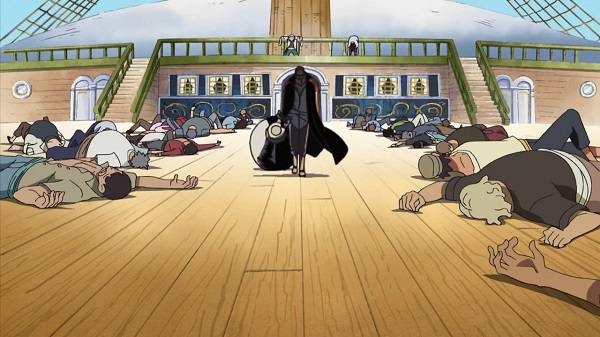 During the Wano arc and One Piece film Red events, he scared the admirals Aramaki, Kizaru, and Fujitora to the core. According to admirals, his Haki blasts are strong enough to paralyze them.

How is Shanks so strong?

Shanks was strong since childhood, and when he was just an apprentice on Roger’s ship, he, along with Buggy, took on Whitebeard on multiple occasions. Even though they lost but never stopped going against him, later, he used to fight against Mihawk, but after losing his left arm, Mihawk lost interest. At an unknown point in time, he fought against Blackbeard, who gave him those unforgettable scars on his left eye. 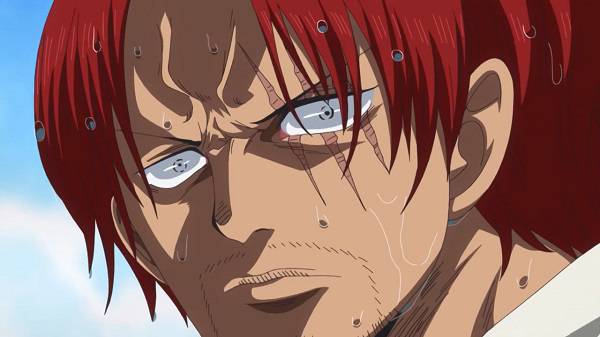 After becoming Yonko, he had a meeting with Whitebeard. After the discussion, he clashed against him, which split the sky into two halves. During the Marineford arc, just by seeing him, most of the marines were extremely frightened to go fight against him as they were surprised that he immediately arrived after battling against Kaido. Recently, during the Post-Wano arc, we saw how admiral Aramaki gave even before he put up a fight against Shanks after only taking his Haki blast.

Before his fated meeting with Luffy, Shanks was one of the fearless pirates. Even before he became Yonko, he went on against CP9, which was led by Who’s Who. He easily managed to steal the devil fruit Gomu Gomu No Mi from them.

After that incident, Who’s-Who was discarded by the World Government, and probably Shanks’s bounty got raised to 1.04 billion berries. It shows that Shanks was very powerful at that time. He is powerful enough to fight for the strongest swordsman in the world at the beginning of One Piece.

In the movie red, Shanks took on the marine admirals to save his daughter Uta. He warns both Kizaru and Fujitora that if something happens to his daughter, they will have to face the consequences.

When Kizaur launches his attack above the sky, Shanks easily manages to deflect that attack. Seeing this brings sweat to Kizaru’s face. Fujitora immediately decides to retreat since it would start a war when innocent people are around them.

Why is Shanks so strong?

During the release of the movie Red, many leaks surfaced on social media. The one who took the community by storm was Shanks, the Figarland family. Figarland family might be one of the twenty royal families which formed the world government. 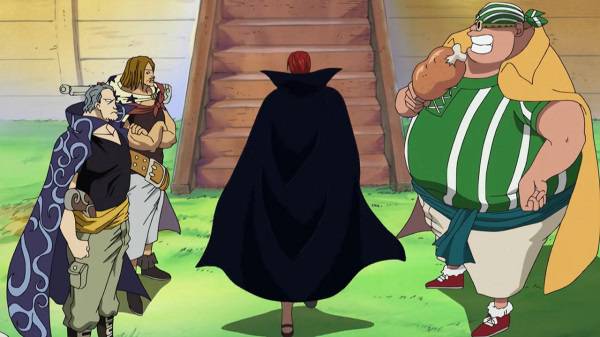 This led to many fans becoming very curious about Shanks’s origin. After the release of the movie, it was revealed that not Shanks but Uta was from the Figarland family who was found by Shanks when she was one year old inside a treasure chest, just like how Roger found him.

Coming to the origins of Shanks, he was found by Roger and Rayleigh found inside a treasure box when he was only one year old. And Shanks has the strongest conqueror Haki which cannot be learned; it can only be gained through the bloodline. Shanks has one in a billion Supreme King Haki. It led to various theories, such as he may be Xebec’s son or High celestial son.

According to the first theory, there is a likely chance that shanks are Xebec’s son because first, we must wonder why he was in God Valley. The highest possibility is that he might be protecting his year-old son from enemies. Rock D. Xebec is one of the notorious pirates who wanted to conquer the entire world.

He commanded the world’s notorious pirates under his command. His crew members were Whitebeard, Big Mom, Kaido, Shiki, and Captain John. If he is indeed the son of Rock D. Xebec, then he is also the member of D who carries its will. It makes him the natural enemy of Celestial Dragons.

According to the second theory, there is a likely chance that Shanks is a celestial dragon as the god valley incident was the clash between Roger & Garp against Rocks to protect celestial dragons and their slaves. There might be a chance that Rocks kidnap the high celestial dragon son so that he can stop the war between them and could escape by managing him as his shield.

This theory makes Shanks a celestial dragon, which is proved by his enmity with Teach, who carries the name the will of D. As we already know, the person who holds D in his name is the natural enemy of God, i.e., the celestial dragon. It is similar to that of DonQuixote Doflamingo, who is also a celestial dragon.

This would also logically fit how Sengoku easily listened to him and how he got easily got an audience with Gorosei. As they easily allowed him inside Mariegeios.

These are two theories that are going viral on social media regarding Shanks. So, this is it for today, folks! Here, we have concluded our article on “One Piece: How Strong is Shanks?“ We will update once the story progresses further, as we can witness what kind of moves Shanks is going to make in the One Piece world.