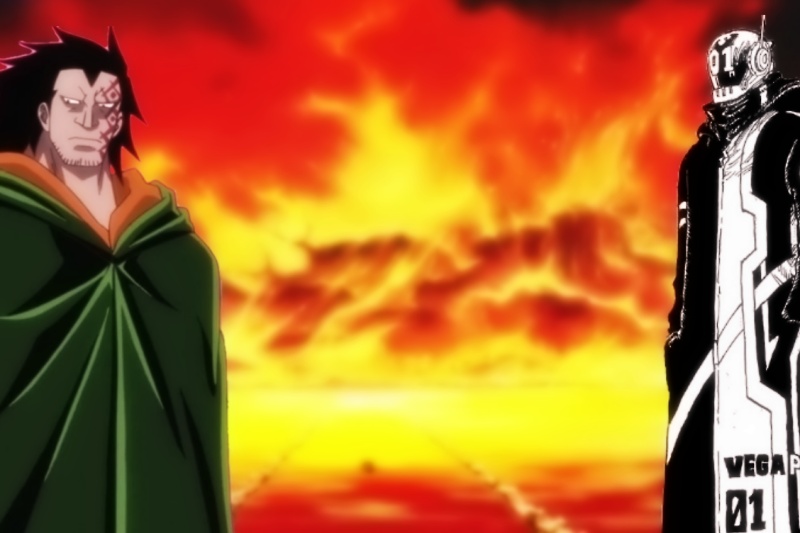 Finally, a glimpse of spoilers arrived, thanks to redon from Arlong Park Forums for surfacing the early spoilers. And this time, it will blow your mind. The next chapter will unveil one of the greatest mysteries of all time, and it is related to Monkey D. Dragon. So, tighten your seatbelts and let proceed through the spoilers and raw scans of One Piece Chapter 1066.

In the last chapter, we witnessed multiple unexpected events. Starting with the entrance of Kuma Seraphim, which is far more powerful than we expected. He alone fought the Straw Hat Pirates. Then we witnessed the remaining Punks and Punk-01 Shaka, who was talking to Dragon. And in the end, Shaka revealed that the Egghead is not a futuristic island; it’s ancient technology.

According to him, 800 years ago, the Ancient Island was far more advanced than we see now. The chapter ended where Luffy and nakama discovered a giant ancient robot. It seems like now Oda sensei is focusing more on unveiling the old mysteries. So, let’s go through the spoilers part.

The title of One Piece Chapter 1066 is “The Will of Ohara.” It means we will witness past events when marines slaughtered the whole Ohara library.

Here are the spoilers of One Piece Chapter 1066. Below we have attached the additional comment and answer by Redon regarding the next chapter.

According to Shueisha, there is no break this week. So, One Piece Chapter 1066 will release on its mentioned schedule, i.e., on November 13, 2022. The complete raw scans with English translation will surface two days earlier on TCB scans. Here, we highly recommend following Viz Media and Mangaplus Shueisha to read the official One Piece manga.