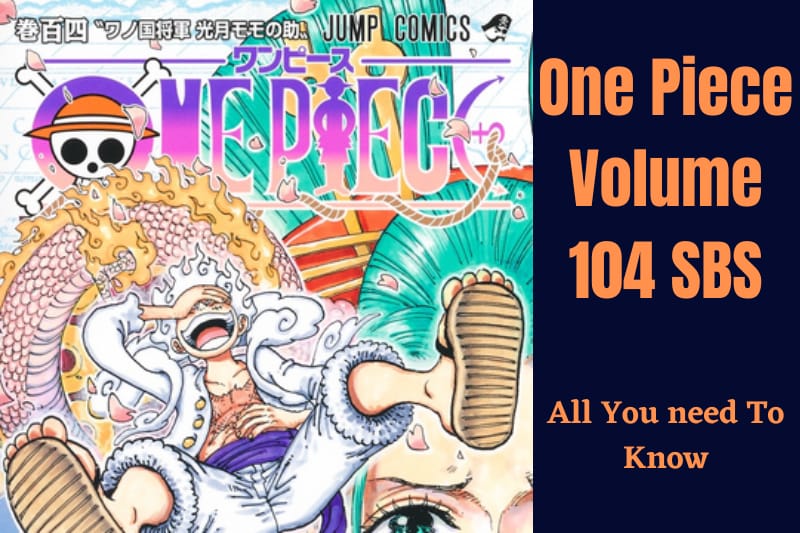 One Piece is one of the greatest franchises of all time and has maintained its hype for over 25 years. Because of its fantastic world-building and incredible character development, it succeeded in grabbing attention from across the world. This is why fans were looking forward to getting the information about One Piece Volume 104 SBS.

In the previous ten years, it rapidly increased its fan following and became the best-selling manga franchise of all time. Consequently, fans were always desperate to know about the latest chapters of the manga before they were published.

This is why they follow all platforms such as Reddit, Discord, Quora discussions, anime websites, interviews, events, and so on to get the information.

One Piece SBS is one of the most popular and genuine sources for getting all necessary information related to the series from its original creator, Eiichiro Oda. For fans who do not yet know about One Piece Volume 104 SBS, don’t worry; we will tell you about it.

You just have to read the article thoroughly to the end to get all the answers to your questions. So without any further delay, let’s dive into this informational article.

SBS’s full form is Shitsumon o Boshu Suru, which means I am taking questions. Most Manga series feature a special column in which the creator of the series replies to their avid fans’ questions. Whenever any manga series enters its 4th volume, it will begin to attach a special column, which is called SBS.

In One Piece SBS, Eiichiro Oda gives some valuable answers to their fans related to the series or its characters. In the SBS, the questions and answers were written in a simple format. It tells us some untold facts about the series that we have not heard yet.

The facts will be anything, such as personal details about characters, such as their birthday, hobbies, favorite food, favorite place, and so on. Oda sometimes shares the background of the character and reveals some hidden characters yet to appear.

One Piece Volume 104 SBS is the special column of question-answers that features in the latest volume 104 of the manga series. It is the most recent One Piece SBS, and fans were eager to get some new facts and stories about the series.

In this SBS, Oda reveals several details and facts about the series, some of which are serious and some of which are silly. Some severe facts reveal some new characters’ names, the real identities of several mysterious characters, etc., while silly facts are about hobbies, beauty care, etc.

Let’s learn all the significant answers of Eiichiro Oda in detail.

1) Oda unveils the names of the CP0 agents

The real name of CP0 agents are:

2) Oda shares the backstories of the Kid Pirates

Presently, along with the Straw Hat Pirates and the Heart Pirates, Kid Pirated has also gained popularity all over the One Piece world. Both Kid and Killer did a tremendous job in defeating Big Mom and Hawkins, respectively. Till now, we didn’t know much about their past. So, let’s go through it.

At some point Kid and Killer became close friends with a girl called Victoria S. (Shirton) Doruyanaika, who became their first crush for the both of them. This character was previously mentioned and talked about in the Volumes 87 and 98 SBS (3/5) pic.twitter.com/Pvt8B0Fehm

Kid, Killer, Heat, and Wire once lived on an island in South Blue under the rulership of the Criminal Gang. Each of them lives alone with their small gang, while Kid and Killer are close friends. Everything in their lives went smoothly until Kid and Killer met a beautiful girl, Victoria Doruyanaika.

After the series of events, Victoria was unfortunately killed by the criminal gang that ruled the area. This leads the four of them—Kid, Killer, Heat, and Wire to unite their gangs and become a single, powerful gang to defeat the ruling criminal gang.

After defeating them, they turn their gang into a pirate group and embark on an adventure under the leadership of Eustass Kid. They also named their ship “Victoria Punk” as a memorial to Victoria Doruyanaika.

Oda says that the Shank’s pirate group, the Red Pirates, is an extensive group of pirates. His group has several big officers and many ordinary members, all of whom call Shank the Big Boss. This indicates how powerful Shanks is and has great command over his large group of pirates.

4) Oda shares the name of a new character

Oda finally shares the name of an unknown character who first appeared in Chapter 1053. His name is Sennorikyuuru, and he is the Master of Tea Ceremonies and is famous for making the most delicious food in the Wano Country. It would be great if he had a cooking competition with Sanji.

Oda says Nami regularly takes massages from Nico Robin and eats nutritious food made by Sanji. She used natural lotions and creams that were created by Chopper and took care of her hair with Brook’s help. She regularly does several types of workouts to maintain her attractive body shape.

Finally, we get to witness the secrets of Nami’s beauty. She maintains her a lot. But honestly, I like Robin more.

Oda shares the hobbies of all six members of the Flying Six, i.e., Sasaki, Page One, Who’s Who, Black Maria, X Drake, and Ulti.

We hope you found all the necessary information regarding One Piece Volume 104 SBS and got all of your answers. Here we conclude this article.