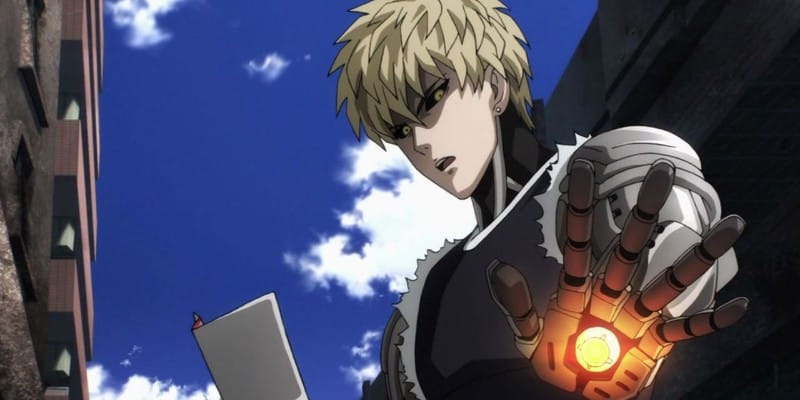 Genos is the deuteragonist of the webcomic turned manga series, One Punch Man. He is always aiming to become stronger and fight for justice, and he is seeking to kill the rogue cyborg that killed his parents four years ago. He self-proclaimed himself as a disciple of Saitama in order to get stronger, leading to many adventures. Under the Hero Association, he goes by the name ‘Demon Cyborg’ and is an S-Class Rank 14.

He is of an earnest character and strives to become stronger, and frequently pesters Saitama to train him. But over time, he eventually mellows out while spending time with his mentor. He also has a certain degree of pride in himself and his abilities.

Power of Genos in One Punch Man–

As an S-Class Hero, he is a powerful opponent without a doubt. Before meeting Saitama, he had defeated many monsters and organizations. His entire body is covered in cybernetic enhancements, and his cybernetic arms are changed along with his progression.

Later, he used a variant of the above-mentioned ability, True Spiral Incineration Cannons, against the fusion of Psykos and Orochi and completely nullified one of its strongest energy blasts, but it was a one-use attack.

He can produce lasers from his hand, arms, and shoulders, which bends and changes trajectory at his will. He used these lasers to destroy the leftover part of Orochi’s body. He is also sufficiently compatible with Drive Knight as he completed a Tactical Combination with him.

Genos is capable of firing energy beams powerful enough to destroy a giant meteor in one shot. He is also one of the most proficient fighters in the series and skilled enough in hand-to-hand combat to best Sonic and Sea King but can’t match other extremely skilled fighters like Bang and Garou.

In a fight between Genos and Sonic, the match would result in a draw, as stated by the series’s creator ONE, and he also stated that he is rather powerful even among the S-Class Heroes. He is oftentimes thought of as one of the weakest characters in the series, but in times he has proven why he is among the rank of S-Class Heroes and the reason behind the ‘Demon Cyborg‘ name.