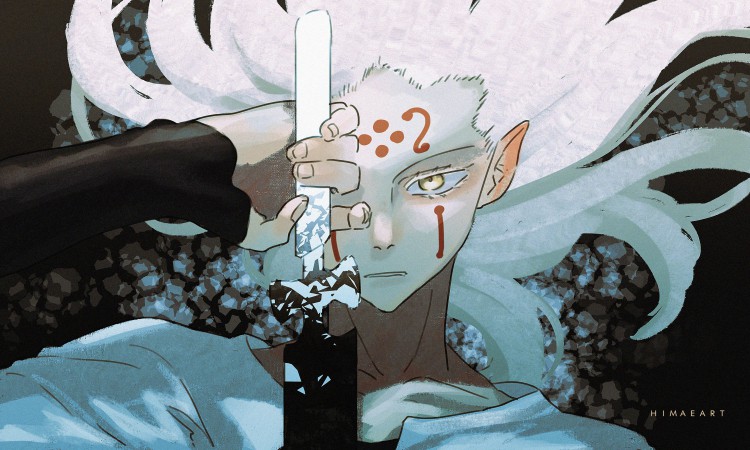 The Black Clover series, written and illustrated by Yūki Tabata, revolves around Yuno and Asta’s adventure and journey while they aim to become the Magic Emperor of the Clover Kingdom. The Black Clover is a world full of magic and diverse characters, each unique in its way, and the series easily grasped the audience’s heart and climbed to the top of everyone’s watchlist.

And the series has many powerful characters, and Licht is one of them. He debuted in Chapter 68 and was later revealed that he was the leader of the elf-tribe as well as the Apostles of Sephirah. He was married to Tetia and was a close friend of the first Magic Emperor, Lemiel Silvamillion Clover.

Licht was an elf with fair skin and gold eyes, but the most prominent feature was his white hair pulled back into a single braid. He was kind and compassionate and had a strong sense of loyalty and love towards those he considered his friends. After his resurrection, he was apathetic but regained his initial personality after his soul was awakened by Secre, with her Sealing Magic.

Power of Licht in Black Clover-

He possessed a grimoire which granted him the ability to materialize swords and wield them. Due to his despair over the Massacre of the Elf Tribe, his grimoire turned into a five-leaf clover grimoire, and later a devil resided in it. He also uses Ultimate Magic, one of the elves’ magic techniques, to produce incredibly powerful spells.

This innate ability of his allowed him to create and wield swords. Moreover, he could also use swords made of light and displayed great control over them. Besides that, he is also a master swordsman, which was seen during his fight with Yuno and Asta, and was also capable of countering Zagred’s attacks with ease. Later, his three swords became the Demon-Slayer Sword, Demon-Dweller Sword, and Demon-Destroyer Sword.

It is a mid-range offensive type Sword Magic, this skill allows the caster to summon a sword and release a giant slash when swung. The released slash dissipates later. The slash can cut anything and the skill was first seen in Chapter 148. This skill is strong enough to stop a hurricane and other spells.

Another variant of Sword Magic and also a mid-range offensive type. During Reincarnation Arc in Chapter 206, Licht used this skill against the devil Zagred. It releases multiple giant slashes when a sword is swung and can cut anything in its paths. This skill was only shown once in the series.

Another mid-range offensive type and was seen in Chapter 207 when Licht used the skill against Zagred. He used the Demon-Dweller Sword to absorb the magic power of the surrounding allies and unleashed it in a single slash. It is one of the powerful skills as it was to disintegrate a high-ranking devil, Zagred, leaving behind only his heart as well as annihilate a section of the Shadow Palace.

It is a supplementary type of magic and Licht used this skill to gather mana in his legs to increase strength. Besides this, the skill also boosts speed and other physical attributes. While other Magic Knights use Reinforcement Magic to increase their physical capabilities, he uses this skill to further augment his speed and reflexes.

This skill was shown in Chapter 210 and it is a supplementary type of both Union and Light Magic. Licht used this skill to connect with his allies and to transfer Lemiel’s Light Magic through the sword to them. The Light Magic not only creates a large protective aura but also increases the recipients’ speed.

It is a type of supplementary and is a Sword and World Tree-based Union Magic spell. Licht used this skill while placing his hand on William’s back to create connections to their allies using the Demon Dweller Sword. These connections tied together to form a gigantic shining tree that disseminated information or magic to the connected allies.

Forbidden Magic falls under the classification of spells that draw power from the underworld and make use of negative mana. These spells are more powerful than their normal counterparts and ignore the limits of normal magic. Licht used this magic to counter Zagred’s attacks but his magic got tainted by the netherworld.

He is extremely fast as was seen when he outpaced Asta’s Ki-sensing and is on par with Lemiel Silvamillion Clover, a Light Magic-user. He also possesses an immense amount of magic power which enables him to float and levitate himself as well as others. After fully awakened, Licht’s power was overwhelmingly vast but not oppressive for his allies.

With this, the post has come to an end. Currently, the series has 27 volumes and the ongoing anime has 3 seasons. Read the officially released chapters on VIZ Media and watch the anime series on Crunchyroll. We will be back with more posts like this, till then stay tuned with us.