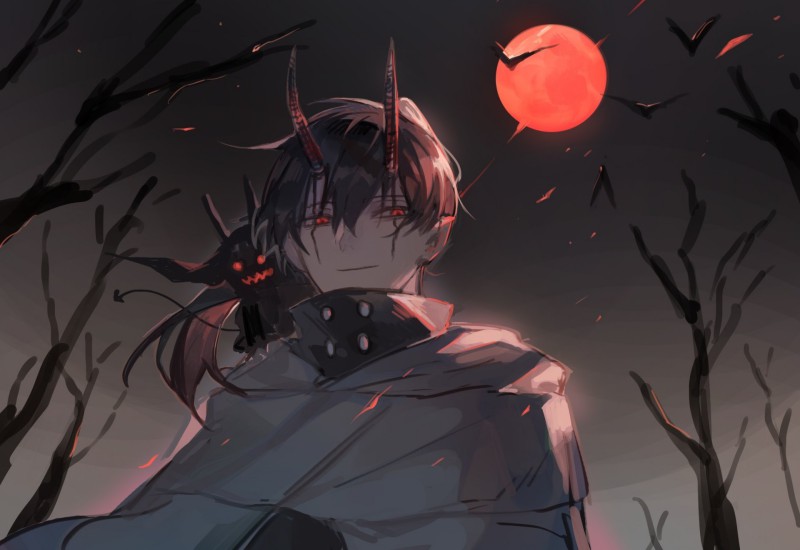 The Black Clover series, written and illustrated by Yūki Tabata, revolves around Yuno and Asta’s adventure and journey while they aim to become the Magic Emperor of the Clover Kingdom. The Kingdom is protected by 9 squads of Magic Knights where Black Bull is one of them who is notorious for their destructive behavior and the most troublesome squad.

They cause more damage despite good deeds done, are rowdy and boisterous, and no one knows that better than Nacht Faust, vice-captain of the Black Bulls. Even though he is the vice-captain he despises both the Black Bulls and Yami Sukehiro and that’s his reason to visit the base once and goes off to spend several years working as a spy within the Spade Kingdom. And wasn’t introduced until Chapter 246 of the series.

Nacht wears a dark-colored jacket with four buttons on the high collar and wears a plain cord necklace, from which hang four devil-connected relics. He is a very pragmatic and logical person. He is not shy about expressing his dislike of all the Magic Knight captains to their faces. Nacht had a more jovial personality while in Azure Deer, but the time he spent in the Spade Kingdom has changed him.

Nacht possesses a grimoire that grants him the ability to use various shadow-based magic spells and is skilled in using Mana Zone. He is also a host of the devils and unlike Asta, he is host to four different devils who grant him power: Gimodelo, Slotos, Plumede, and an unnamed rooster-like devil.

It is Nacht’s innate power that allows him to manipulate as well as travel through shadows at will, even the shadows that are far apart from each other. It is also similar to Spatial Magic as it can transport a limited number of people through the shadows. Moreover, he can hide in shadows and also immobilize his opponents who step into a shadow or restrain them.

It is a type of supplementary magic and was first seen in Chapter 266 of the series. This skill enables the caster to spread shadows out when the caster touches the ground. Hands of shadow rise from the ground and grab the opponent, drag them through the shadows, and transport them into another location.

It is a long-range supplementary type of shadow magic. This was seen in Chapter 274 where Nacht cast this skill to extend shadows from under his feet to cover the entranceway and create a long hallway. An opening to the desired location forms at the end of the hallway. It is used to cross great distances in seconds and allows several people to transport at once.

As Nacht is adept in using Mana Zone he can control the surrounding mana to spread out shadows, it shrouds everything, cutting off all light. Also, he and his clones can easily strike the foes without being sensed. Nacht hides his Ki while using this skill and was seen in Chapter 272.

Another long-range supplementary type of shadow magic. As seen in Chapter 279 when he concentrated the devil’s power to their eyes after merging with Plumede. This skill enables him to perceive mana in the surrounding area as well as peer through shadows to other locations.

Nacht used this ability against Asta where he assimilated the devil  Gimodelo into his body through Shadow Magic, boosting his magic power and capabilities drastically. The most peculiar part of this skill is his arrow-tipped tail which can be used to link two shadows, enabling him to attack from an opponent’s shadow. Also, one of Gimodelo’s abilities is Pack which allows him to spawn a group of clones from a shadow while Ki remains the same in every clone, which enables him to hide among them.

This spell increases his magic power as well as aptitudes after merging with the devil Slotos through Shadow Magic. One of Slotos’s abilities, Toughness enhances his physical resilience, enabling him to withstand and move in immense gravity and also covers him in armor made of shadow during transformation.

Nacht assimilates with Plumede, one of the four devils, to increase his magic power and attributes through shadow magic. This ability was seen in Chapter 279 and during transformation, he was covered in clothing made of shadow, giving him the impression of a ninja. Plumede’s ability is Agility which further augments physical speed, enabling him to dodge fast attacks.

Nacht is host to four devils namely, Gimodelo, Slotos, Plumede, and a rooster-like devil, and uses four relics linked to the devils to temporarily summon them into the living world. He merges with them to access the power of Unite, giving his magic an additional effect or ability to use in battle.

With this, the post concludes. Currently, the series has over 11 million copies in circulation, and the ongoing anime has 3 seasons. Read the officially released chapters on VIZ Media and watch the anime series on Crunchyroll. We will be back with more posts like this, till then stay tuned with us.