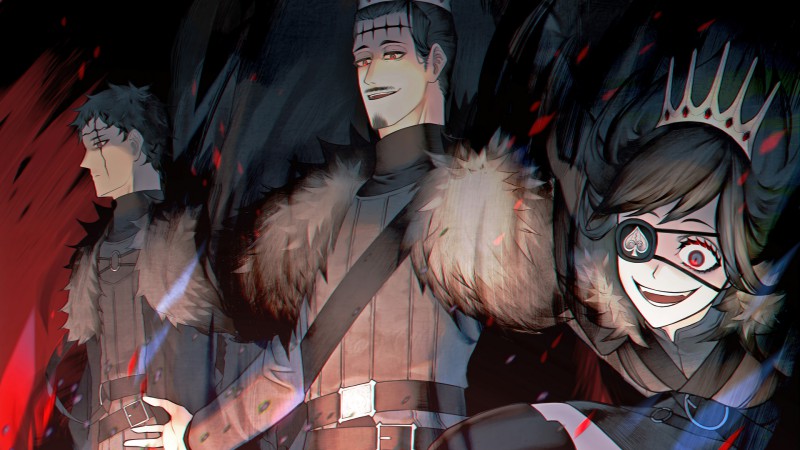 The Dark Triad is the main antagonistic faction in the second saga of Black Clover manga and anime and is a trio of powerful mages who currently rule over the Spade Kingdom through their tyranny and enslavement. They are composed of the Zogratis siblings, consisting of Dante, Vanica, and Zenon, and all of them have made a deal with the upper-class Devils.

The Dark Disciples are elite groups of the Dark Triad and direct disciples of the foremost three leaders; their innate magic has been amplified by the lesser devils granted by their leaders. They are equal in status to Magic Knight Captains of the Clover Kingdom, Spirit Guardians of the Heart Kingdom, and Eight Shinning Generals in the Diamond Kingdom.

The series is written and illustrated by Yuki Tabata and follows the story of Asta and Yuno, two orphaned boys, who make their way through Clover Kingdom’s Order of the Magic Knights and aims to become the Magic Emperor. While achieving their aim, they go on various adventures and encounter numerous powerful foes and friends alike.

Robero Ringert was a Dark Disciple of Vanica Zogratis, one of the Spade Kingdom’s Dark Triad. He was a Stage Zero ranked mage and cursed with immortality. Despite being powered up by the devil’s power, his magical skill was not all that memorable; he could only manipulate and harden his tongue.

So, he is ranked at the bottom of this list due to his inability to fully control his devil power, for which he was even sacrificed by Vanica in combat against Magic Knights of Clover Kingdom.

Hischer Ongg was also a Dark Disciple of Vanica Zogratis. His main magic was to manipulate his fingernails, elongating and hardening them at will, and he was also cursed with immortality.

Halbet Chevour was also a Dark Disciple of Vanica Zogratis, a Dark Triad member, and owned Grimoire, which contained hair-based magic spells. She is ranked higher than Hischer as she defeated Potrof, another Stage Zero-ranked Mage, on her own.

Despite having an immense amount of magic power and cursed with immortality, she lost against Charmy Pappitson. We have placed her above Hischer as she could stand her ground against Charmy, one of the wielders of unusual magic power, and later she was sacrificed in the form of Vanica’s explosive.

Sivoir Snyle, like his peers, was also a Dark Disciple of Vanica Zogratis and also a Stage Zero-ranked mage. He possessed a spade grimoire that contained various eyeball-based magic spells and single-handedly defeated Floga, one of the Heart Kingdom’s Spirit Guardians.

Even though his inability to fully utilize the devil’s power, he could construct his mana into Magic Bullet in addition to snipping skills, using eyeballs. His power may seem powerful and beneficial in combat but is not handy in terms of close combat, so we have placed him in the 4th position.

Gaderois Godroc, one of Zenon’s Henchman possesses a spade grimoire that contains various stone-based magic spells; his Stone Magic is harder to break due to enhancement from the devil’s power. At first, it seemed his Stone Magic was impenetrable, but in the end, it was proved otherwise.

His position is 3rd in the list as, unlike the previous Dark Disciples, he can use 40% of his devil’s power and could withstand multiple attacks from the Golden Dawn squad, the strongest Magic Knights of the Clover Kingdom, without sustaining any damage. But, later, he was subdued by Yuno.

Foyal Migusteau is another one of Zenon’s Henchman and possesses a spade grimoire that contains different mist magic spells, which allows him to manipulate mist. He gave quite a trouble to Golden Dawn Squad by disorienting them, which profited both him and Gaderois in battle and was able to kill half of the squad without sustaining any damage themselves.

He is ranked 2nd due to his power to condense mists into water bullets that are powerful enough to shatter Steel Magic. Foyal can use up to 40% of a devil’s power. He is ranked above Gaderois and Sivoir as his water bullets can penetrate any strong shield and can overpower any spell that attempts to locate him.

Svenkin Gatard was another of Vanica Zogratis’s disciple and possessed a spade grimoire that contained various skin-based magic spells. Despite not having any unique magic or skills, he could single-handedly defeat Smurik, one of the Heart Kingdom’s Spirit Guardians, also another Stage Zero-ranked mage.

He was the most powerful disciple till now who could use 50% of his devil’s power, and it seems his incompetence to draw the devil’s power to its full potential also led him to become one of Vanica’s expense.

The Dark Triad is meant to serve as a complete contrast to the Eye of the Midnight Sun and the Elf Tribe, and they easily can take on and overpower an entire squad of Magic Knights on their own. As the series is progressing, we are served with more of their evil intentions and scheming nature, and we have yet to see the full picture of the upcoming chapters. But it’s confirmed there will be an apparent boss fight soon, and more and more trump skill cards will also be revealed, which makes us anticipate even more of it. Do read and follow this series for more unique and powerful characters and get prepared for a rocky and fascinating journey ahead. Follow us and keep an eye on our next Top 10 update.

Read the Black Clover series on any paid online platform, like Viz Media and Mangaplus Shueisha, and watch anime online on Crunchyroll.