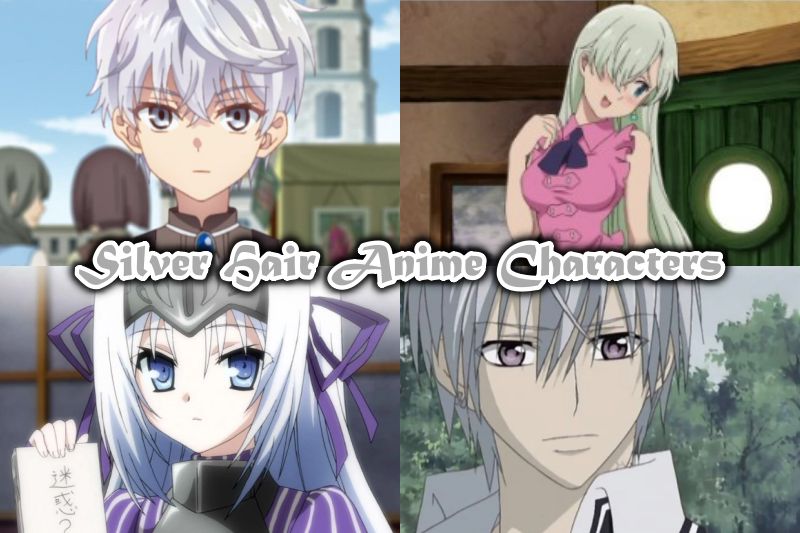 Remember, this is a list, and the characters below are not noted in any particular sequence. With that out of the way, let’s take a look at the 15 coolest Silver Hair anime characters.

Gintoki Sakata is a samurai who is the founder and president of Yorozuya and takes on odd jobs for money along with Kagura and Shinpachi. A very skilled samurai, he fought in the Joui War and was known as White Yaksha by his enemies.

Gintoki has silvery-blue hair with his bangs falling over his forehead. His distinct perm is made fun of several times in the series by various characters and even Gintoki himself. The man might seem like a good-for-nothing, but when he finally draws out his wooden sword, it’s absolutely chilly.

Laura Bodewig is a German first-year student who transfers to IS Academy in Class One. She is also the IS Representative Candidate of Germany. Laura is ranked as a Second Lieutenant and the commander of the military organization Schwarzer Hase.

Laura is a pretty teenager with long straight silver hair that falls across her back and ends at her waist in blunt ends. She has somewhat uneven bangs, with shorter ones across her forehead and longer ones around her face.

Laura has a single prominent strand that reaches across the right side of her head and falls over her bangs.

Killua Zoldyck is a Hunter and the best friend of Gon Freecss. Killua is the third son of the Zoldyck Family, a family of infamous assassins who trained him to be a killer from childhood.

Killua’s looks and appearance are an absolute treat. Killua has gorgeous silver locks that always fall over his face messily. He also has four distinguished strands at the front of his head.

Isla is a Giftia, a type of android with a humanoid body that is said to be the world’s most authentic imitation of human lives. She is the top Giftia marksman of Terminal Service One of Sion Artificial Intelligence Corporation. Isla is partnered with Tsukasa Mizugaki, the new employee at the office.

Isla, as a Giftia, has the body of a beautiful young girl with long silver hair that is styled in twin-tails and a single strand or an ahoge sticking from her head. Her twin-tails are quite long and reach down to her waist. She has long bangs hanging over her forehead and a pair of longer bangs framing her face.

Son Goku is a Saiyan and currently Earth’s strongest fighter and defender. MUI, i.e., Mastered Ultra Instinct, is an immensely powerful divine transformation that channels the entirety of the power of Autonomous Ultra Instinct. In this state, Goku’s powers may surpass even those of the Gods of Destruction.

As typical of every other state and power level Goku achieves, his appearance changes in the MUI state. In this state, Goku’s whole body is surrounded by a bright heavenly glow.

His hair takes on the same style as his Super Saiyan hairstyle and turns silver in color. Even his eyebrows and irises change to silver. If that isn’t cool, we don’t know what is!

Eucliwood Hellscythe is a necromancer who revives a dead boy named Ayumu Aikawa after he is killed by a serial killer. She stays with him as he searches for his killer and is his first living companion. She is more popularly known by her friends as Eu.

While Eucliwood’s age is unknown, she takes on the form of a young human girl with long straight silver hair that reaches well past her waist and ends near her knees. She wears a metal plate across her forehead and over her bangs, with two purple strings tied above her ears.

Zero Kiryu is a human and a vampire hunter who turns into a vampire after being bitten by another vampire who kills his family. He is later taken in by Kaien Cross and is a student at the Day Class in Cross Academy.

Noticed and admired for his handsomeness, Zero has short straight silver hair, which ends at touching his nape. Long bangs fall across his face, reaching past his eyes. The silver colored hair, the beautiful lavender eyes, and those earrings most assuredly make Zero a very cool character.

8) Meiko Honma (Anohana: The Flower We Saw That Day)

Meiko Honma, or Menma, as her childhood friends lovingly called her, was a little girl who died in an accident, an event that traumatized every one of her friends and caused their friendship to fall apart. Several years after her death, Menma appears to her friend, Jinta, as a ghost.

Though Menma died when she was a child, she appears to Jinta in a teenage form. Her long silver hair has grown since her childhood, now reaching down to her hips. Like before her death, her bangs remained short and parted slightly in the middle. Menma’s beauty remains as eternal as her sweet personality.

Lugh Tuatha Dé was the world’s best assassin and master in his previous life before he was killed. As per his contract with a goddess named Venus, Lugh has to kill a hero in his next life to keep his memories of the previous life. With this, Luth is reincarnated into the world as the heir of the Tuatha Dé clan.

While he died as an old man in his previous life, Luth is a handsome young man in this life who is adored by many girls. He has short messy silver hair that falls stylishly across his face with softly wavy bangs. He has eyes of the same color to match and coolness befitting of the world’s finest assassin.

Elizabeth Liones is the youngest princess of the Kingdom Of Liones who sets out to find the Seven Deadly Sins to protect her kingdom. Elizabeth is actually the 107th incarnation of the Goddess Elizabeth, who had fallen in love with Meliodas of the Demon Clan.

Elizabeth is undoubtedly one of the prettiest women in the series, with stunning features. Her long silver hair reaches down to her hips, and her bangs completely cover her right eye but leaves the left side of her face exposed.

Sesshomaru is a dog demon and the older half-brother of Inuyasha. Already a very powerful demon, Sesshomaru was envious of Inuyasha, who had been left with the legendary sword Tessaiga by their father, Inu no Taisho.

Sesshomaru is a stunning man with striking features. He has long, straight silver hair that reaches down to his knees. His bangs fall over his forehead and are parted in the middle to show the moon mark on his forehead.

Tomoyo Sakagami is a soft-spoken yet tomboyish girl. After transferring in her second year to Hikarizaka Private High School, she regularly beats up troublesome delinquents and soon is known as the toughest brawl in school.

Tomoyo is a beautiful young lady whose long straight silver hair cascades down her back and ends near her thighs. She also has prominent bangs with two longer side bangs framing her face. Tomoyo wears a black hairband in her hair.

Kojou Akatsuki is a normal high school student who is revealed to be the fourth Primogenitor, the strongest vampire, and an immortal demon who is only mentioned in legends. He is also the older brother of Nagisa Akatsuki.

Kojou has straight silver hair that reaches down to his nape. His bangs fall unevenly on his face, with the bangs on the side shorter and falling over his eyes and the bangs on the middle longer and covering most of the length of his nose. With silver hair and a calm manner, Kojou is one cool guy.

14) Emilia (Re: Zero – Starting Life in Another World)

Emilia is a half-elf who meets Subaru on his first day in the magical world, making him fall in love with her. She is one of the candidates to become the 42nd King of the Dragon Kingdom of Lugnica in the Royal Selection.

As a half-elf, Emilia has beautiful features. She has long silver hair that ends just before her knees. Emilia keeps tied near the end, with her bangs falling over her eyebrows. She also likes to accessorize her hair with pretty accessories.

Tomoe is a fox yokai who becomes familiar with Nanami Momozono after the latter accidentally becomes the goddess of the shrine. Tomoe originally served Mikage, the previous god of the shrine, to who he is very loyal and grateful for saving his life. Once upon a time, Tomoe loved a human woman named Yukiji.

Tomoe is admired by a lot of characters and his classmates in class for his extremely good looks. He has short silver hair that falls in bangs across the bridge of his nose, with two white fox ears peeking out of his head. In the past, Tomoe had long hair, and his silver locks reached past his waist.

Our list of the 15 coolest silver hair anime characters ends with this. Every character listed in this is different from others, but everyone is important in their own way. Let us know if you agree with our list.